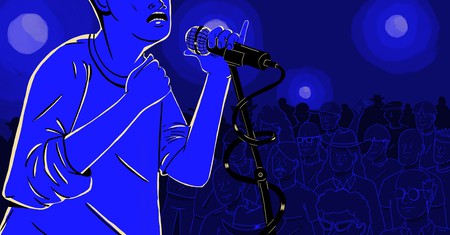 Music isn’t the only form of audible art that gives Austin its ‘live capital’ reputation. Held at the Spider House Ballroom every Tuesday night, The Austin Poetry Slam is a lively gathering of the city’s best poets who digest complex social topics and turn them into the addictive art that keeps drawing crowds. Listen for yourself to get a taste of why slam poetry has quickly become a favored genre all of its own.

Performing one of his most widely known pieces, ‘My Gay’ Jomar Valentin uses this platform to raise awareness for gay life and gay rights.

In ‘Color Theory,’ Kelene Blake beautifully illustrates the essence of what it means to be human through the eyes of a person of color.

The emotionally powerful Jess Howard takes an introspective and blunt approach in ‘My Genie’ to expose the weight involved in taking on false personas to appease other people.

Ayjshané uses profound metaphors in an audience favorite ‘Yella Thing,’ depicting the objectification of women and women of color through socioeconomic norms.

In ‘An Ode to Survival,’ Frank Sanchez uses the stage to bring reflection upon life’s deeper wealth against the burdens of daily survival.

‘Black Magic,’ gathers every sense of the family, culture, and expressive freedom he’s cultivated over the years to expand on its influence both internally and externally.

In her thoughtful and empathetic poem ‘For Charlotte, Who Had to Take Her Dog to the Emergency Vet Again Today,’ Glori B. captivates the audience in the sentiment of what it is to truly give of yourself to someone else.

‘Brown Boy After School Special’ is a firm stance against the negative social discriminations and cultural statistics in America.

This artist is known to pull the crowd in on complex issues by tackling the topic of police abuse and brutality against racially profiled minorities in ‘Full Circle.’

A captivating stage performer and public speaker, The Poetic Butcher’s ‘Resolution’ analyzes the reasons people might seek to be more than what they are. This further encourages the idea that who we naturally are is the best we can ever be.