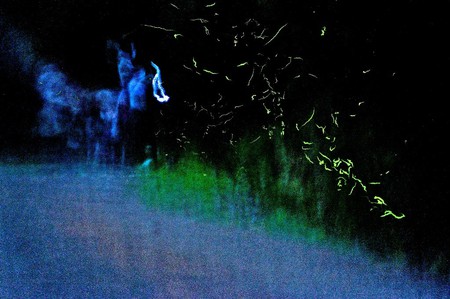 Fireflies (also called lightning bugs) are common in the South. Their flickering lights make them a fascinating insect—one that creates flashes in the dark due to chemically produced light that comes from the lower abdomen. This light is used to attract mates or prey and can be yellow, green or red. It has no infrared or ultraviolet frequencies and can be attributed to the use of bioluminescence. In Tennessee, these fireflies put on a show for those who are visiting the Great Smoky Mountains.

For two weeks during the month of June, Elkmont Campground in the Great Smoky Mountains National Park becomes a place where a natural phenomenon takes place. This special occasion is when thousands of fireflies (known as photinus carolinus) sync up their light patterns to create a light show using their bioluminescent butts. There are 19 species of fireflies within the Great Smoky Mountains, but this specific type is the only breed in the U.S. to be able to blink simultaneously.

The first recorded Western account of synchronized firefly flashing came from Dutch physician Engelbert Kaempfer in 1680. On a trip down the Meinam River, he noted, “A whole swarm of these insects, having taken possession of one tree, and spread themselves over its branches, sometimes hide their light all at once, and a moment after make it appear again with the utmost regularity and exactness, as if they were in perpetual Systole and Diastole.” 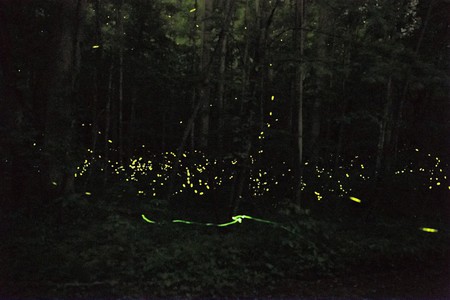 In 1917, Philip Laurent wrote about synchronized flashing in the journal Science, arguing that, “For such a thing to occur among insects is certainly contrary to all natural laws,” and suggested that it was actually the observer’s eyelids that flickered, not the fireflies. Modern scientists argue that the process of synchronized flashing occurs through a process called “coupled oscillation.”

It wasn’t until 1992 that the phenomenon, thought to be exclusive to Southeast Asia, was discovered in the United States. It was a letter from a woman who read Science News that brought attention to photinus carolinus in the Great Smoky Mountains area. She wrote to Cornell mathematician Steven Strogatz, who studied synchronization, saying, “I am sure you are aware of this, but just in case, there is a type of group synchrony lightning bug inside the Great Smoky Mountains National Park near Elkmont, Tennessee. These bugs ‘start up’ in mid-June at 10 p.m. nightly. They exhibit 6 seconds of total darkness; then in perfect synchrony, thousands light up 6 rapid times in a 3-second period before all going dark for 6 more seconds. We have a cabin in Elkmont… and as far as we know, it is only in this small area that this particular type of group synchronized lightning bug exists. It is beautiful.”

In 1995, scientists confirmed the existence of photinus carolinus in the Great Smoky Mountains and subsequently discovered populations in the Congaree Swamp in South Carolina and other high-altitude locations in the Appalachian Mountains. It is quite possible that there are more varieties of synchronized fireflies flashing throughout the United States. 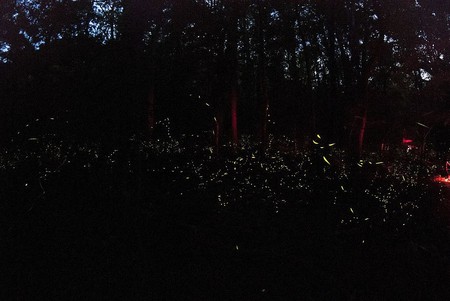