The Story Behind Memphis’ Voodoo Village 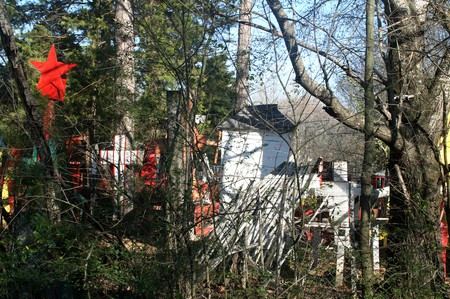 Over the years, St. Peter’s Spiritual Temple has been a spot where Memphis residents believe voodoo practices and cult-like ceremonies have taken place. Is it really something to fear, or are locals completely misunderstanding why the temple exists?

In the 1960s, a self-ordained Baptist minister named Wash “Doc” Harris began to develop a compound on his property in Memphis, Tennessee. The idea was for this compound to be a center for spiritual healing, and he named it “St. Peter’s Spiritual Temple.”

On the property are lawn ornaments—forms of art that Harris created, including sculptures and paintings—that he used as devotionals, believing that his ability to preach and heal was a gift from God. These pieces, which have a distinct Masonic influence, include a large cross with nails jutting out, rainbow-colored fences, stuffed animals, animal skulls, totem-like sculptures, and ladders. Harris says his sculptures are decrees to God, and he constructed these works as cleansing tools to help wipe out negative forces.

Due to the cultish nature of the compound, and the misunderstandings surrounding it, Memphis locals started referring to the property, which sits on a dead-end street, as “Voodoo Village“; this led to several instances of vandalism and theft. Indeed, Harris’ Sunday teachings were often interrupted by drivers who would try and disrupt his ceremonies by screaming obscenities and firing guns.

Even today, the mostly black neighborhood is the target of harassment by local teens—mostly white—who intrude on the property, often to be chased off by angry residents wielding baseball bats. These teens share the many legends about the community that include stories of voodoo priests and ghosts. Harris’ grandson Mook eventually took over the property, but it began to fall into despair. In 2015, he put a security system in place that blocks off outsiders with gates and fences, as the residents in the area greatly respect their privacy. In particular, Halloween has always been a time when volunteers have stood guard to scare away would-be vandals and trespassers.

The site is not open to the public, although they recently lent one piece of artwork from the property to the American Folk Art Museum in New York.