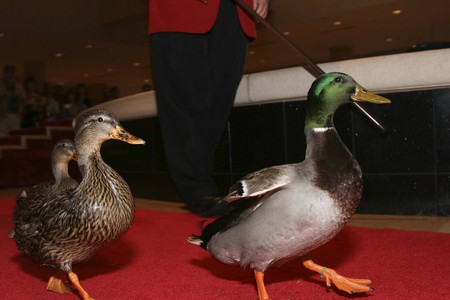 When people visit Memphis, they often hit popular tourist spots such as Graceland, the National Civil Rights Museum, and the Stax Museum of American Soul Music. But there’s one lesser-known attraction that has been entertaining Memphis visitors for more than 80 years.

The Peabody Duck March is a tradition of The Peabody Memphis that began in the 1930s by the then-general manager, Frank Schutt. It all started when Schutt and his friend, Chip Barwick, spent a weekend hunting in Arkansas. Upon their return, the two had a little too much whiskey and thought it would be hilarious to put some of their live duck decoys in the fountain of the hotel. Back then, it was legal for hunters to use live decoys.

Three small English call ducks—Peabody, Gayoso, and Chisca, named for the three hotels owned by the Memphis Hotel Company in 1933—were selected as test subjects, and the reaction from guests and passersby was complete enthusiasm. The rumor is that the ducks were not the first residents of The Peabody’s lobby fountain; supposedly, turtles and alligators briefly swam in its water in the 1920s. 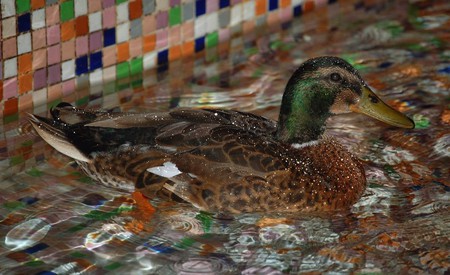 one of the Peabody Ducks / (c) Midnight Believer / Flickr

Then, in 1940, Edward Pembroke, a bellman at the hotel, offered to help deliver the ducks to the fountain each day. As a former circus animal trainer, he taught them the now-famous Peabody Duck March and became The Peabody Duckmaster. He served in that capacity for 50 years. Now, in order to keep Pembroke’s legend alive, the ducks still visit the lobby fountain at The Peabody at 11 a.m. and 5 p.m. each day.

There are currently five North American mallards living in the fountain at The Peabody Memphis. The ducks do not have individual names, and each team of Peabody ducks lives at the hotel for only three months. They then return to the farm, where a local farmer raises them, free to live as wild ducks. The Peabody Memphis recognizes its resident waterfowl as wild animals and does not domesticate the ducks or treat them like pets.

To further drive this message home, duck is not served anywhere at The Peabody Memphis and has not made an appearance on the hotel’s menus since its 1981 reopening. It is quite possible that Chez Philippe is the only French restaurant in the world not to offer duck on its menu.

When the Peabody ducks are off-duty, they live in their Royal Duck Palace on the hotel’s rooftop. The marble-and-glass structure features its very own fountain with a bronze duck spitting water. It also includes a small replica of the hotel, where the ducks can nest in a soft, grassy yard.

The nationally known Peabody ducks have appeared on The Tonight Show with Johnny Carson, Sesame Street, The Oprah Winfrey Show, in People magazine and the Sports Illustrated Swimsuit issue. 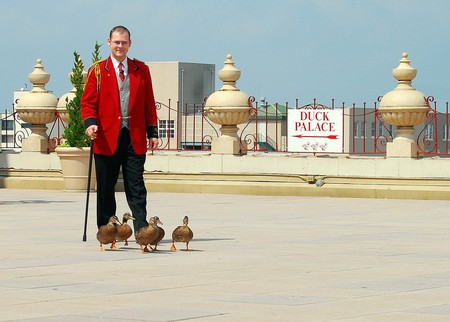 Peabody Duck Master with The Peabody ducks
Give us feedback