The Most Beautiful Buildings in Memphis 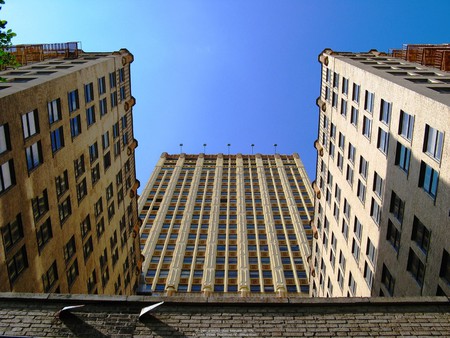 Memphis is known the world over for its thriving jazz and blues music scene, the bustling Beale Street and its delicious southern barbecue. But Memphis is also home to several buildings that create a visual masterpiece for the city. Take a look at our list of must-see buildings that will deepen your appreciation for the city and its history and culture. 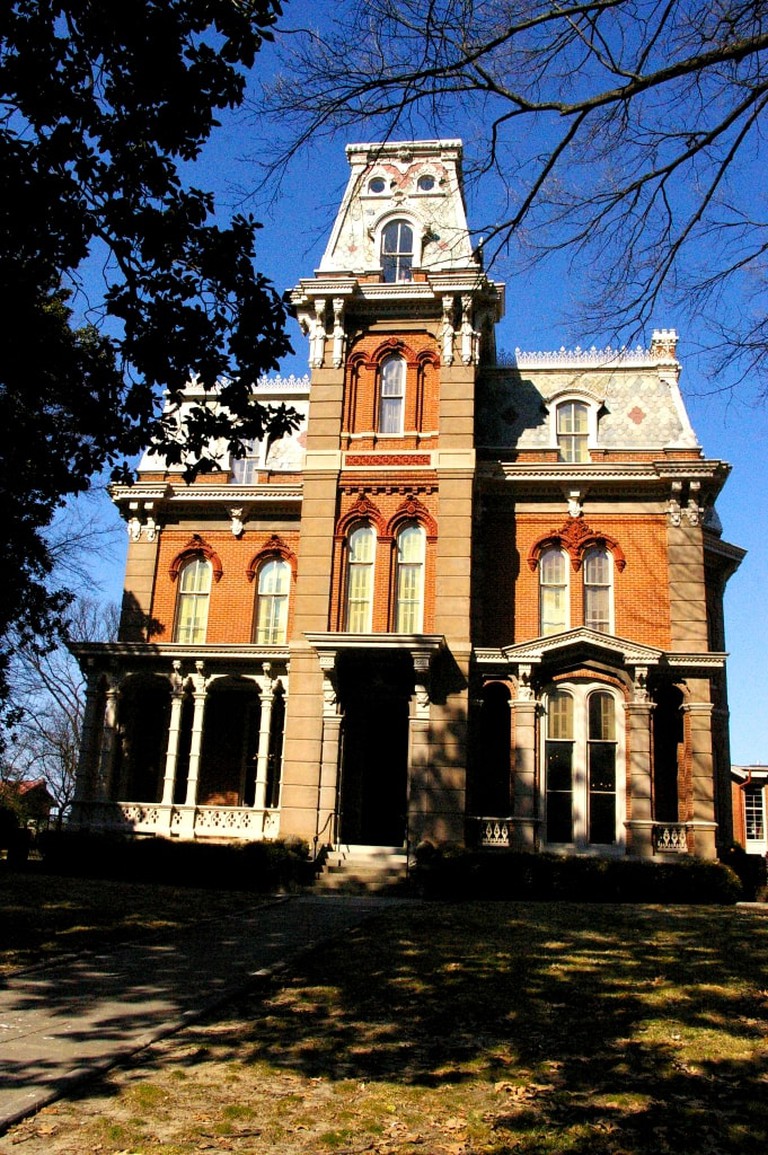 Woodruff-Fontaine House | ©Roland Klose/Flickr
In 1845, Amos Woodruff, a successful carriage maker, bought property in Memphis to expand his carriage business. He was one of the wealthiest people in Memphis at the time and was heavily involved in the city’s political community. He ran for mayor twice and was president of the city council. Today, that property is the Woodruff-Fontaine house, a French Victorian mansion that was completed in 1871. The first event to take place at the Woodruff-Fontaine House was the wedding of Amos’ daughter, Mollie.

The second owner of the house was Noland Fontaine, a businessman who ran the largest inland cotton business in the United States. Noland and his family lived in the home for 46 years, until his wife’s death in 1928. After two subsequent sales, the house moved to Overton Park in 1959, and the Association for Preservation of Tennessee Antiquities used a public fund to preserve the mansion in 1961. The mansion is made from machine-carved cypress wood, with most of the original cypress flooring still intact. There is an embossed tin design on the hallway ceiling on the third floor, which was hammered by hand.

Inside the mansion is a hidden door which showcases autographs and handwritten notes by craftsmen around the world who worked on the construction of the home.
Open In Google Maps
680 Adams Avenue, Midtown, Memphis, Tennessee, 38105, USA
Visit Website
Visit Facebook page
Give us feedback 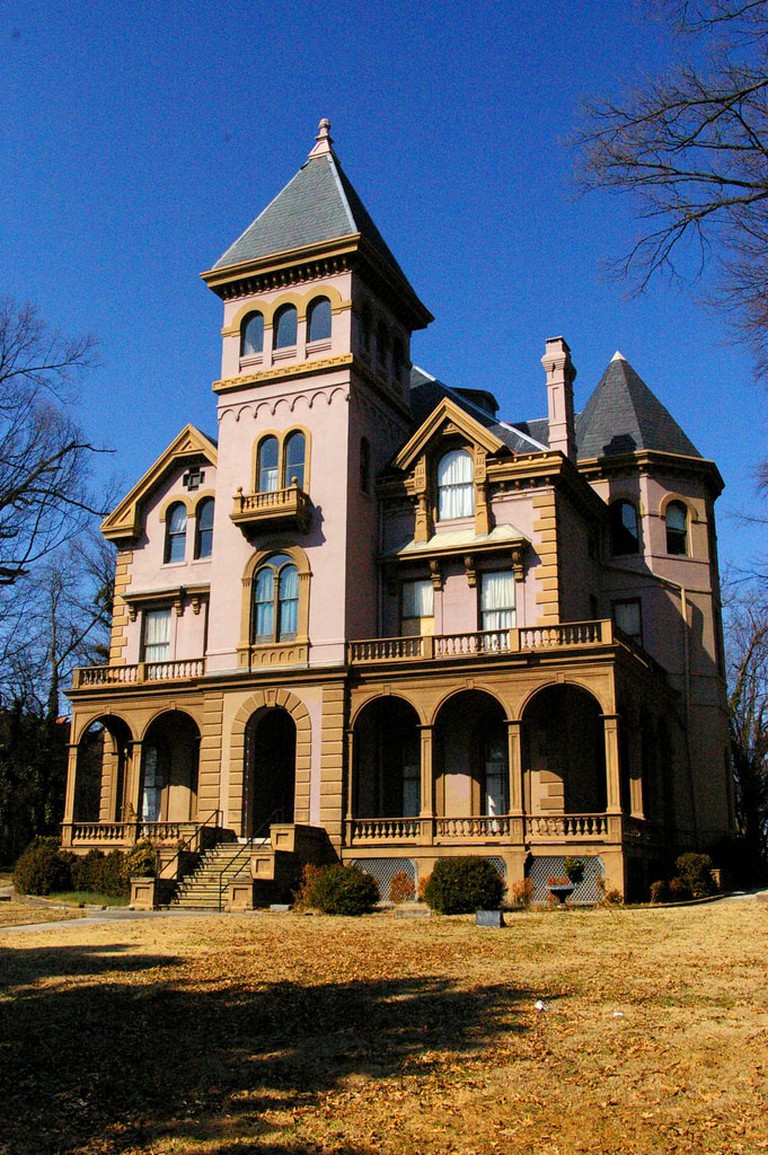 Mallory-Neely House | ©Roland Klose/Flickr
The original owners of the Mallory-Neely House were Isaac and Lucy Kirtland, who bought the property in 1852. It was built as an early Victorian villa in Italianate architecture style. In 1883, Columbus and Frances Neely purchased the home and lived there with their five children. The Neelys renovated the home, expanding it from two-and-a-half stories to three stories, and enlarging the space for the tower. They decorated it with parquet flooring, ornamental plasterwork, and ceiling stenciling.

All of the original furniture and artifacts still remain in the home, which has operated as a historic house museum since 1987. The house is listed on the National Register of Historic Places and is located in the Victorian Village Historic District.
Open In Google Maps
652 Adams Avenue, Midtown, Memphis, Tennessee, 38105, USA
+19015231484
Visit Website
Give us feedback 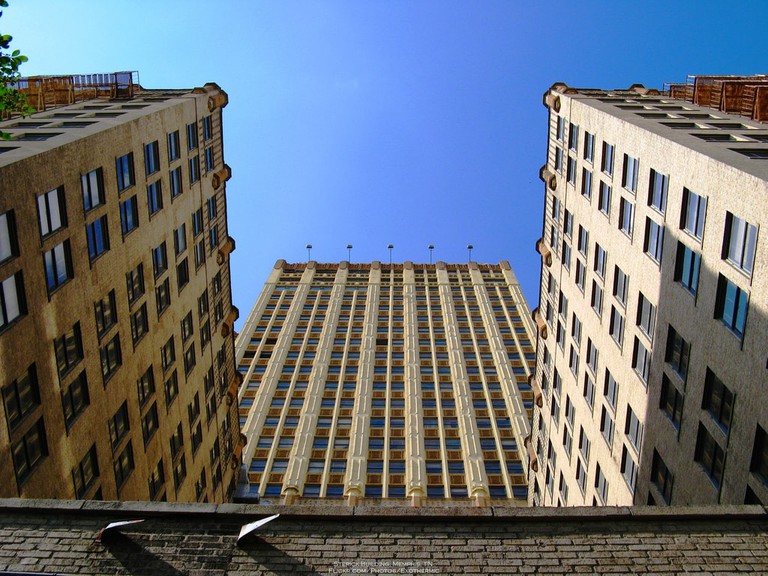 Sterick Building in Memphis | (c) Exothermic / Flickr
The Gothic-style Sterick Building, which was designed by Wyatt C. Hedrick & Co., gets its name from the original owners: R.E. Sterling and Wyatt Hendrick, when combined, create ‘Sterick’. The building was completed in 1930 and was once called ‘the Queen of Memphis’. When it opened, it was the tallest building in the south and is now the fifth tallest building in Memphis. The building has 29 floors and is 365 feet (111 metres) tall.

When it was first constructed, the Sterick Building had a bank, a pharmacy, a barber shop and a beauty parlor. The first three floors were made from granite and limestone, and the lobby had eight high-speed elevators that took the building’s workers and guests up to the higher levels, and even the Regency Room restaurant, which was located on the top floor. Today, the building is vacant, but still stands at the corner of Madison Avenue and North B.B. King Boulevard.
Open In Google Maps
8 North 3rd Street, Downtown Memphis, Memphis, Tennessee, 38103, USA
Give us feedback 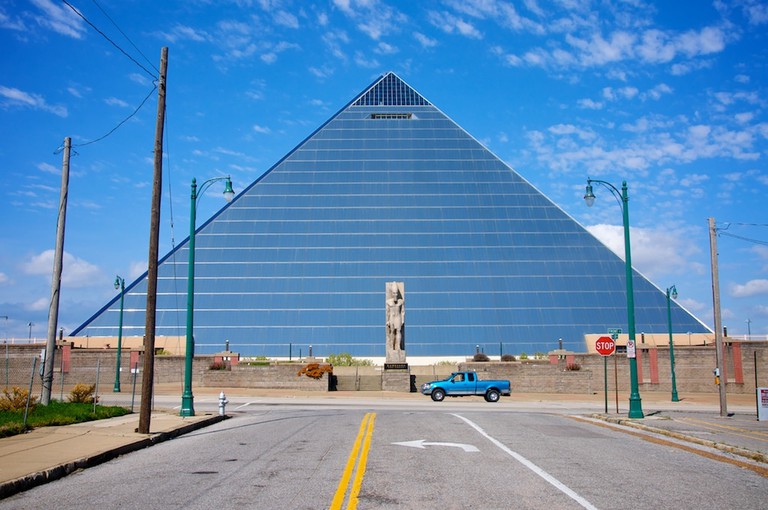 Memphis pyramid | © sawdust_media/Flickr
It was originally known as the Great American Pyramid, and it was an idea conceived in 1954 by Memphis artist Mark C. Hartz. The initial plans included three pyramids that would be located on the south bluff of Memphis overlooking the Mississippi River. But the project lingered for 30 years, until Hartz’s son brought it to life. When it was first built, the pyramid was a 20,142-seat arena owned jointly by the city of Memphis and Shelby County, which sold its share to Memphis in 2009. The pyramid is 321 feet (98 metres) tall and has base sides of 591 feet (180 metres) high.

Today, the pyramid houses a Bass Pro Shop, which signed a 55-year lease in 2010. Officially called Bass Pro Shops at the Pyramid, the megastore also includes a hotel, restaurants, bowling alley and an archery range. At the apex of the building is an observation deck, which visitors can get to by taking the tallest freestanding elevator in America. At the base of the pyramid is a 100-room hotel called Big Cypress Lodge. You’ll also find the largest collection of waterfowl at the aquarium, which contains 600,000 gallons of water.
Open In Google Maps
1 Bass Pro Drive, Uptown, Memphis, Tennessee, 38105, USA
+19012918200
Visit Website
Give us feedback 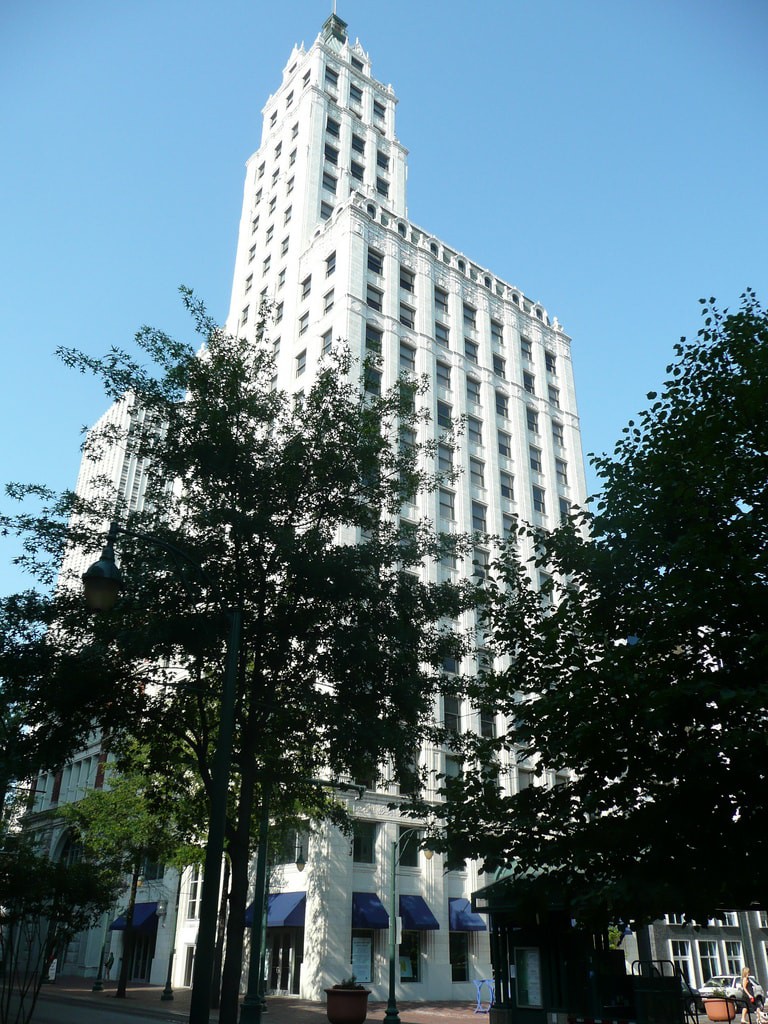 Lincoln American Tower | (c) Reading Tom / Flickr
One of the first steel frame skyscrapers built in Memphis was the Lincoln American Tower. It was built in 1924 overlooking Court Square, by Lloyd Binford, who was the president of the Memphis branch of the Columbia Mutual Insurance Company. As the head of the Memphis Censor Board, Binford later ran his own offices from the top floor of the building.

In 2006, the tower was damaged by a fire that destroyed the top floors of the building, as well as the roof. The first tenants leased space in the 22-story building in 2008. The building currently has 31 residential apartments and three floors of commerical offices, and is accepting additional tenants.
Open In Google Maps
99 North Main Street, Downtown Memphis, Memphis, Tennessee, 38103, USA
Give us feedback 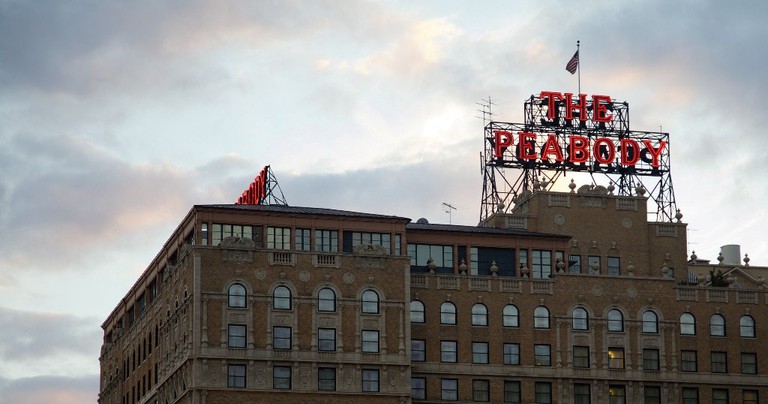 The Peabody Hotel | ©David Brossard/Flickr
The original Peabody Hotel was built by Robert Campbell Brinkley in 1869. He named it after his recently deceased friend, George Peabody, to honor his contributions to the south. Brinkley later gave the hotel to his daughter Anna and her husband Robert as a wedding gift.

In 1953, the hotel was sold to the Alsonett Hotel Group, but went bankrupt in 1965. It was sold in a foreclosure auction to Sheraton Hotels, becoming the Sheraton-Peabody Hotel. When downtown Memphis started to decay in the 1970s, the Sheraton-Peabody suffered financially and subsequently closed. After two more sales and another bankruptcy, the hotel was given a $25 million renovation by Jack A. Belz, who bought the property from his father-in-law for $400,000. The grand reopening of the hotel was in 1981.

Two of the hotel’s most notable features are the neon red sign atop the building, and the rooftop. The Skyway and Plantation Roof is often used to host rooftop parties in the summer, and offers views of Memphis’ skyscrapers. In the elevators, guests must press ‘S’ to get to the top floor. It’s technically the 13th floor, but due to superstitions, the top floor is referred to as the Skyway.
Open In Google Maps
118 South 2nd Street, Downtown Memphis, Memphis, Tennessee, 38103, USA
+19015294000
Visit Website
Give us feedback

Memorial, School
Facebook
Email
Twitter
Pinterest
Copy link
Share
Map View
Originally a two-story farm house, The James Lee House Bed and Breakfast, formerly known as the Harsson-Goyer-Lee House, is now a bed-and-breakfast in Memphis. The house was built by William Harsson in 1848 and purchased by Charles Wesley Goyer in 1852. Goyer lived in the home with his family until 1890, when James Lee, Jr. bought the house. It later became property of his daughter Rosa, who donated it to the city to be used as the James Lee Memorial Art Academy.

After the art school moved to a new location in 1959, the house was vacant until 2012 when it was purchased by private owners and turned into a luxury B&B. The house is composed of three different sections, exemplifying late 19th-century architecture and décor, which includes plaster trim, plaster ceiling medallions and marble mantels. This National Historic Landmark house is an exclusive property that has five suites offering guests top notch amenities and services.
Open In Google Maps
690 Adams Avenue, Midtown, Memphis, Tennessee, 38105, USA
+19013596750
Visit Website
Visit Facebook page
Give us feedback
Give us feedback