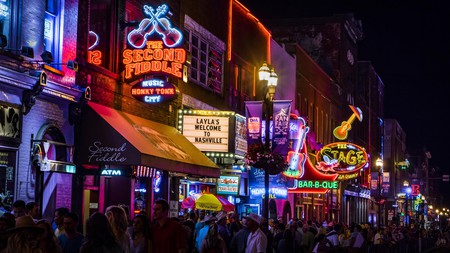 Broadway, in the heart of downtown Nashville, is a major thoroughfare for live music | © Nina Dietzel / Getty Images
Paid Partnership With

Nashville isn’t known as Music City for nothing. Its long tradition of country music, jazz, and blues is not only legendary but still permeates the air today, drawing thousands of visitors to the city each year. You won’t have trouble finding a music venue, but you might have trouble finding the best. We’ve asked our local insiders to share their favorite Nashville live music spots and events to help you out.

Nashville’s premium concert hall and home to the Nashville Symphony Orchestra, the Schermerhorn Symphony Center hosts classical and jazz concerts throughout the year as well as popular touring acts. You’ll be stunned by the acoustics here – the building was formally opened in 2006 and specifically designed for live music. The venue is also worth a visit for the architecture alone. The grand, eye-catching neoclassical façade takes in influences from the city’s replica Parthenon and gives way to stylish, modern interiors with a touch of 1920s elegance.

Live on the Green

Live on the Green is Nashville’s major music festival – and it’s free! If you’re in town when it’s on, experiencing this end-of-summer tradition is an absolute must. The festival features well-known acts – past performers include Cage the Elephant, Band of Horses, Rodrigo y Gabriela, and Steve Earle – as well as emerging local artists. Take in some bands, browse the food trucks and the independent trader stalls and say goodbye to summer with great music, a few local beers, and one hell of a party.

Taste local wines and enjoy a delicious dinner while watching live acts at City Winery. It’s as romantic as it sounds – mood lighting, beautifully prepared dishes, and music make for the perfect date night. The venue doesn’t tie itself down to one particular genre so the program is varied and attracts some more recognizable names – KT Tunstall, Jeff Bridges, and Dennis Quaid have all played here – alongside local talent. Keep an eye out for touring acts, or see what hidden treasures you find on the spur of the moment.

Restaurant, American, $$$
Facebook
Email
Twitter
Pinterest
Copy link
Share
Map View
If you’re going to learn how to line-dance, it has to be in Nashville, right? And where better than Wildhorse Saloon, Nashville’s famous live music and line dancing venue that specializes in good, old-fashioned country and all that goes with it. Line-dancing is open to all – it is an excellent family activity – though be aware that later live music events are 21+.

Concert Hall, Music Venue
Facebook
Email
Twitter
Pinterest
Copy link
Share
Map View
No guide to Nashville’s best live music would be complete without mentioning the Ryman. This hallowed venue, housed in one of the city’s most historic buildings, is a real “made it” milestone for country acts. Johnny Cash, Elvis, Louis Armstrong, and others have all graced the stage, and many more legends in the making will do so as well. You can opt to tour the Ryman, but by far the best way of experiencing it is at a live show. The building is perfect for heartfelt acoustic sets with tight, resonant harmonies. As befits a city full of musicians, expect some fantastic singalongs as well.

Bar, American, Beer, Wine, Cocktails, $$$
Facebook
Email
Twitter
Pinterest
Copy link
Share
Map View
From those new to the Nashville circuit to legendary names that have been around for decades, musicians of all kinds have appeared on the stage of 3rd and Lindsley Bar and Grill. You can learn more about the songwriting process from the experts themselves at Backstage Nashville’s Hit Songwriters Show, which takes place here on Saturdays. Expect a line-up of talented songwriters who have written hits for artists such as Kris Kristofferson, Rascal Flatts, Ringo Starr, the Dixie Chicks, Willie Nelson, Eric Clapton, and more; during the evening they will discuss their work, play a few hits and take questions from the audience. On most other nights you’ll find a roster of talent that is sure to remind you why Nashville is so competitive in the music business. Country, rock, pop, and more have found a friend in 3rd and Lindsley.

Music Venue
Facebook
Email
Twitter
Pinterest
Copy link
Share
Map View
The Station Inn is known for booking country, roots, and bluegrass artists. Every Sunday, the venue hosts a bluegrass jam so bring your instruments and get ready to join in and well, jam – you never know who might be playing alongside you. Notably, singer Alison Krauss frequented the venue in the 1980s and today she is one of the biggest country-music artists in the world.

Music Venue
Facebook
Email
Twitter
Pinterest
Copy link
Share
Map View
The Bluebird Cafe is an iconic venue famed for hosting prestigious and well-regarded songwriters’ nights – frequented by local musicians and country music stars alike – where songwriters take turns performing their material and sharing the inspiration behind their lyrics. It’s all about listening here. Audiences aren’t allowed to speak during performances, so simply relax and immerse yourself in the artistry of the performers.

Music Venue
Facebook
Email
Twitter
Pinterest
Copy link
Share
Map View
For some classic, stompin’ in your boots country music, Tootsies Orchid Lounge is the place to be; in fact, Willie Nelson got his first songwriting job after performing here. Located on Broadway, just across from the Ryman, it’s one of the most frequented honky-tonks in Nashville. You won’t hear any pop, rock, or contemporary music at Tootsies, but you might get to enjoy the talents of local budding songwriters trying to get their big break.

The Mercy Lounge and Cannery Ballroom

Music Venue
Facebook
Email
Twitter
Pinterest
Copy link
Share
Map View
Mercy Lounge is a cozy, second-story venue with a standing room capacity of 500, while its sister venue the Cannery Ballroom is a much larger space that can accommodate up to 1,000 people. Artists such as Katy Perry, Adele, Counting Crows, and the White Stripes have all played at either the Mercy Lounge or the Cannery Ballroom and are a testament to the influential status of the two venues in Nashville. Independent artists also get the chance to perform here, as the venues host a variety of musical acts and also welcome booking inquiries from songwriters interested in performing.

Music Venue
Facebook
Email
Twitter
Pinterest
Copy link
Share
Map View
Robert’s Western World is the place to go if you’re looking for an authentic Nashville honky-tonk. For country music with a twist – or in this case Latin flair – keep an eye out for the venue’s house band, Brazilbilly. You’ll want to wear your dancing boots no matter what night you visit, the crowd isn’t one to just sit and listen.