The 5 Best Day Trips From Nashville 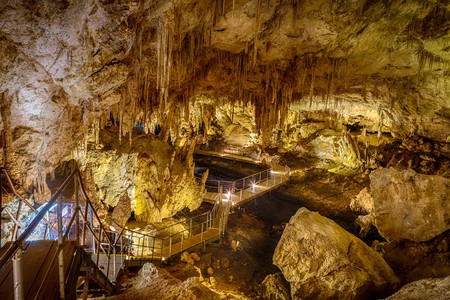 Nashville offers no shortage of ways to stay busy: from the bars that light up Broadway to its plethora of outstanding restaurants and coffee shops to its thriving local art scene, Nashville’s diverse opportunities for entertainment reflect its constantly growing population. But one of the city’s lesser-known assets is its proximity to a myriad of other landmarks, cities and attractions that make a perfect day trip. All that you need to explore these destinations is a car, a day off of work and a taste for adventure – in whatever form that may take for you.

Located 80 miles away from the city in Cookeville, Tennessee, Cummins Falls is a popular day-trip destination for those seeking to not just see water but to hike through it. Travel + Leisure Magazine named the state park one of the best swimming holes in the US, and for good reason: its 75-foot-tall waterfall cascades into a pool that offers swimmers a breathtaking view that is certainly worth the drive. Before you go, know that a short hike is required to get to the falls, and rocks can often be slippery, so come prepared with proper shoes and an openness for adventure. You would be hard-pressed to find a better (or more beautiful) method of relief from the relentless Tennessee heat.

A photo posted by Cummins Falls State Park (@cumminsfallsstatepark) on May 15, 2016 at 7:28am PDT

In just over an hour and a half, you can drive from Nashville to the world’s largest known cave system, Mammoth Cave. Located in central Kentucky, this 400-mile cave is over double the length of the world’s second-largest cave system, the underwater Sac Actun on the Caribbean coast. Mammoth Cave was established as a National Park in 1941, but this magnificent labyrinth has been drawing tourists to explore its depths for over 200 years. Today, visitors to the cave can take a wide range of different tours, including the moderate, family-friendly Historic Tour, the more strenuous Violet City Lantern Tour (during which visitors exclusively explore by lantern light), and the kids-only Trog tour. Additionally, the park above Mammoth Cave offers an abundance of hiking, horseback riding and biking trails, as well as multiple campgrounds for those hoping to extend their natural retreat.

Walking through Mammoth Cave, which now has well-built paths and good lighting, it is hard not to think back to the cavers who started exploring here hundreds (if not thousands) of years ago. There is no place darker than the depths of a cave…turn the lights out and it is the blackest black. These early explorers were lowered into the unknown with ropes tied around their waist. They had only reed torches to light their way, and they had to hope and pray they had enough light to find their way out. If the torch went out, or they lost their way, they were done. And yet, they continued to explore further into the cave each and every time. They explored miles and miles of Mammoth Cave with nothing but these basic tools and an incredible sense of adventure. What a testament to human curiosity . Mammoth Cave National Park (6 of 59) Shot with FUJIFILM X-T1 and XF16-55mm F2.8 lens Photo by @jonathan_irish // Photographer and former Nat Geo staffer Jonathan Irish (@jonathan_irish) is on an epic road trip to visit and create incredible content in all of the 59 U.S. National Parks in 52 weeks during the centennial of the National Park Service. He'll be sharing his images and stories along the way here, on his own Instagram feed, and on the following link at Nat Geo: www.natgeo.com/59in52 . #59in52 #onassignment

If you are from Nashville or its surrounding areas, or if you have driven much on its freeways, then you are likely familiar with the billboards that urge drivers in large block letters to ‘See Rock City.’ Curious about what Rock City entails? Or have you ever wondered what the world’s largest publicly accessible underground waterfall looks like? Then take the short trip to Lookout Mountain, a tiny town in Hamilton County, Tennessee just five miles south of Chattanooga. Here you will have access to three major attractions: Rock City, Ruby Falls and Incline Railway, the steepest passenger railway in the world. While Nashville offers no shortage of lush green spaces and views that would prompt even the most nature-averse to stop and stare, Lookout Mountain is unique not only for its array of attractions but also for its birds-eye view of the Chattanooga Valley.

The first view on our way to the Smokys 🏔

Located within Craighead Caverns, an extensive cave system in southeastern Tennessee, the Lost Sea is the United States’ largest (and the world’s second-largest) underground lake. According to local legend, this 800-foot-long and 220-foot-wide lake was discovered in 1905, when 13-year-old Ben Sands stumbled upon this natural marvel after climbing through the narrow underground opening and finding himself in a room so endlessly filled with water in every direction that even his small lantern could not make a dent in the darkness. Perhaps unsurprisingly for a lake so massive, its full extent is still a mystery; so far, divers have mapped over 13 acres of seemingly boundless water. Visitors to the Lost Sea can see this natural wonder firsthand by taking a guided Lost Sea Adventure tour that involves both a walk through the cave’s pathways and, at the end, a glass-bottomed boat tour of the lake itself.

Explore America's largest underground lake on a glass bottom boat at the #LostSeaAdventure, about an hour north of #Chattanooga. Link in bio. #ChattanoogaFun

For some, the ideal day trip may involve less rough-and-tumble interaction with nature and a little more air conditioning. If this sounds like you – or if you merely want to see for yourself one of the most unique shopping centers in the country – then do yourself a favor and check out the Unclaimed Baggage Center, located in Scottsboro, Alabama. This massive warehouse purchases items that are orphaned by their owners at airports across the country and sells them to customers at a heavily discounted rate. The center takes up more than an entire city block and its offerings range from electronics to clothing to home goods and everything in between. The center has even been featured on the Today Show, Travel Channel and numerous other media outlets for its mission to allow these unclaimed goods to be reclaimed by enterprising, budget-conscious shoppers. (Bonus tip: if you have a spare hour or two to spend in Scottsboro, check out Payne’s Sandwich Shop and Soda Fountain in the downtown square for an old-time diner lunch and a stellar ice cream cone.)