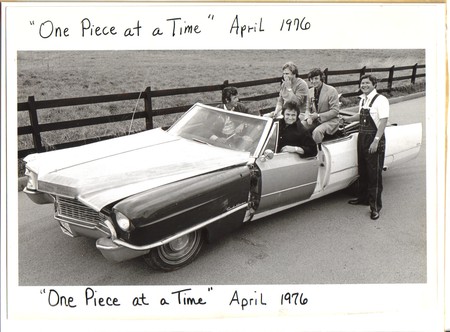 © Cash in the "one piece at a time" Cadillac/WikiCommons

The Storyteller’s Museum & Farm, devoted to Johnny Cash and his pivotal role in the rich history of country music, has opened in Bon Aqua, Tennessee. Located just 40 miles west of the popular Johnny Cash Museum in downtown Nashville, this new attraction promises to steep visitors even more deeply in the legacy left behind by this country music superstar.

The story behind this converted general store and farm goes like this. In the 1970s, Johnny Cash’s accountant was found to be embezzling funds from the Man in Black and using said funds to purchase various properties across the United States. When Johnny Cash discovered the illegal activity, he sold all of the properties. All, of course, but one. He kept the farm in Bon Aqua, Tennessee, a small unincorporated community named for the ‘good water’ of a nearby mineral spring. Located in northern Hickman County, this sparsely populated small Tennessee town quickly became a ‘sanctuary‘ for Cash, who elaborated on the charms of the farm in his book. ‘For me in ’72, it was love at first sight … a place that moved into my heart immediately, a place I knew I could belong. This is a great place for pottering. I can cook my own food, read my own books, tend my own garden, wander my own land. I can think, write, compose, study, rest and reflect in peace.’

Wrapping up a nice weekend at the Storytellers Museum…

Johnny Cash passed away in 2003, and for twelve years thereafter his beloved rural respite was largely neglected. This changed in 2015, however, when Brian and Sally Oxley, a husband-and-wife author duo, bought the ranch for nearly $900,000, as well as the nearby general store where Cash once hosted his now-legendary ‘Saturday Night in Hickman County’ guitar pulls. The couple restored both properties and, this summer, opened them to the public as a museum in an effort to honor the man who left a profound impact on not only country music but on the music industry in general.

In the farm itself, visitors can step directly into the house that Cash himself once considered his home and ‘the center of [his] universe.’ The general store has been converted into the Storyteller’s Museum. With the help of Cash’s daughter Cindy, the Oxleys have carefully collected an array of artifacts and memorabilia, including handwritten song lyrics and the Cadillac inspired by Cash’s One Piece at a Time that promises to provide visitors an immersive Johnny Cash experience unlike any other.