4 Record Stores That Are Keeping Vinyl Alive In Nashville 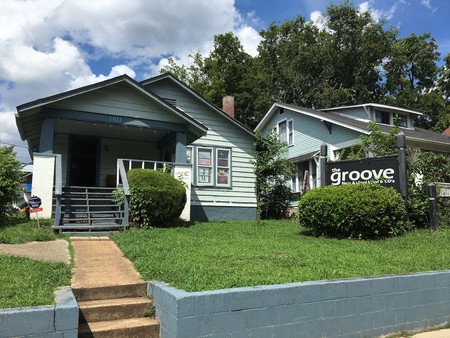 It should come as no surprise that in a city bursting at the seams with music — from recording studios and record labels to venues that foster the countless up-and-coming voices — there are more than a few quality outlets for purchasing records. Here you’ll find a rundown of some of Music City’s best places to indulge yourself in the very art that distinguishes Nashville from any other city in the country.

Store
Facebook
Email
Twitter
Pinterest
Copy link
Share
Map View
Grimey’s, located on the opposite side of Wedgwood Avenue from Nashville’s flourishing stretch of 8th Avenue, has long been recognized by music lovers as one of (if not) the best record stores, period. It’s notorious for good reason: over the years, the beloved record store has been featured by numerous national publications, including Rolling Stone’s 2010 Best Record Stores in the USA list and USA Today’s 2016 compilation of the 10 best places to buy vinyl in the country. While this store may appear small from its exterior, inside you’ll find hundreds of thousands of records on both vinyl and CD, spanning nearly every genre imaginable. The store is especially popular amongst the alternative-minded audiophiles of Nashville, and this is perhaps no surprise; while Nashville may be known for country music, this is certainly not the only genre produced and eagerly consumed here. In fact, owner Mike Grimes, a musician himself, opened the store with one fundamental goal in mind: to ‘further the profile of Nashville as the ultimate non-genre specific Music City in the world.’ Anyone visiting Nashville with a fondness for music would be remiss not to stop by Grimey’s, or the used record store next door, Grimey’s Too. If you’re lucky, you may even catch one of Grimey’s legendary (and free!) in-store performances.

Store
Facebook
Email
Twitter
Pinterest
Copy link
Share
Map View
If you drive quickly enough past The Groove, you might mistake it for another one of the houses surrounding it on Calvin Avenue, a shaded and relatively quiet residential street tucked away in East Nashville. However, walk up the steps and through the front door of this converted home and you will find a treasure trove of new and used vinyl, CDs and more. The store offers music from a wide variety of genres and its used records are affordably priced, with a substantial collection selling for just $.99/record. The store also supports local talent by featuring prominent records from many of the city’s own artists. While the store may be cozy, its selection of records is finely curated by co-owners Louis Charette and John Moore; no space is wasted, and the result is an eclectic mixture of vinyl and CDs that has kept locals loyal to the joint since it opened in 2007 (it originally was in a larger space in Five Points). Ultimately, John Moore sums up the atmosphere of the store best: ‘We like customers to feel like they’re hanging out at a friend’s house.’

Store, Shop
Facebook
Email
Twitter
Pinterest
Copy link
Share
Chances are, you’ve never been to a record store quite like Fond Object. This East Nashville shop offers a killer selection of vinyl records, from pop and indie to punk and metal with everything in between. In addition, this converted pet grooming studio functions as a vintage clothing/furnishings boutique, petting zoo, record label and outdoor music venue — all housed within one charming white-brick building in Riverside Village. Ever since five music-loving friends opened this one-of-a-kind store in 2013, it has been a favorite amongst both locals and in-the-know visitors. Stop by to pick up a record or two, enjoy a low-cost outdoor show under the string lights of the backyard Back House, or pet one of the rescued animals in the Fond Object Petting Zoo (on Petting Zoo Tuesdays, bring the animals some vegetables and enjoy a 15% discount in the store).

Store
Facebook
Email
Twitter
Pinterest
Copy link
Share
Map View
Unlike many other record stores in Nashville, Phonoluxe often flies under the radars of even the more musically-inclined locals. Located on Nolensville Pike south of downtown, this warehouse of vinyl, CDs and movies is easy to miss — but if you’re searching for a wide-range selection of media at an affordable price, Phonoluxe is tough to beat. While this store might lack the homespun charm of other boutique stores in Nashville, what it lacks in decor it makes up for in selection. As Randy Fox for Nashville Scene reports, owner Mike Smyth is far less preoccupied with marketing and kitsch and far more concerned with continuing to supply Nashville with the best possible assortment of vintage records and movies. Before you go, know that this store is only open on the weekends, so plan accordingly.
Give us feedback