Nashville’s Music Valley: 10 Things To Do in Opryland 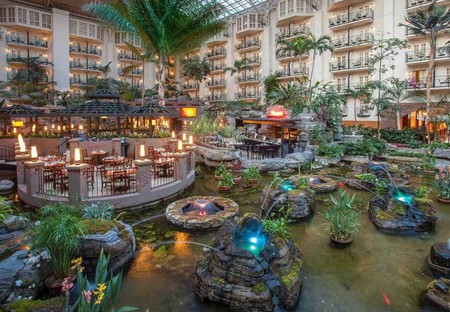 Whether you spend a night at the palatial Opryland hotel or decide to just stop by for a show at the Grand Ole Opry, any time spent in Nashville would be incomplete without a trip to the legendary Music Valley.

Concert Hall, Music Venue
Facebook
Email
Twitter
Pinterest
Copy link
Share
Map View
This legendary music venue started life as a popular radio broadcast in 1925; as its popularity grew, the show began to stage live broadcasts at the Ryman Auditorium in 1943. In 1974, the Opry received its own location in Opryland, where it has been “dedicated to honoring country music’s rich history and dynamic present” and “showcasing a mix of country legends and the contemporary chart-toppers who have followed in their footsteps” since. Check out the venue’s impressive roster of upcoming shows or take a backstage tour to get a unique, in-depth look at the very halls through which innumerable legendary artists have walked.

Spend a night at the Opryland hotel

Marriott’s Gaylord Opryland Resort and Convention Center is not only the largest hotel in Nashville, but is also one of the largest hotels in the US. This is a far cry from your average hotel: the Opryland consists of seven floors, over 2,800 rooms and nine acres of indoor gardens (not to mention a number of amenities, including both indoor and outdoor pools, multiple restaurants and its own golf course). However, you don’t have to spend the night at the hotel to take advantage of the hotel’s many attractions. Visitors are welcome to wander through the hotel and spend a few hours marveling at all that it has to offer!

At the Opryland hotel, waterfalls are not an exclusively outdoor phenomenon. In fact, right inside the hotel at the Cascades Atrium, you will find a 44-foot tall waterfall that will make you wonder why you ever considered hiking over hills to find an outdoor cascade. Spend a few moments (or hours) taking in this truly unique indoor attraction.

Take a riverboat tour on the Delta River

Not only does the Opryland boast an indoor waterfall, but it is also home to a quarter-mile-long river that is made of samples from nearly 1,700 rivers around the world. Check out this indoor river, located in the Opryland hotel’s Delta Atrium, by climbing aboard one of the Mississippi-style flatboats and taking a short tour. Not only will you learn all about the history of the Opryland Resort, but you’ll be guaranteed an afternoon of relaxation unlike any other.

Browse the shops (or watch a film) at Opry Mills

Amusement Park, Movie Theater, Park, Shopping Mall, Theater
Facebook
Email
Twitter
Pinterest
Copy link
Share
Map View
Roughly half a mile away from the Opryland is the largest outlet mall in the Tennessee area: Opry Mills. This massive indoor shopping mall, located on the grounds of what was once the Opryland USA amusement park, is home to over 200 different stores, an impressive food court and a Regal IMAX movie theater. Opry Mills has something to offer everyone – whether you’re a local resident on a shopping mission or a visitor in need of a budget-friendly afternoon of diversion.

Every night at 6pm and 8pm in the Delta Atrium at the Opryland hotel, the lights dim and something incredible unfolds: a water fountain show unlike any other. Stop by to see firsthand this awe-inspiring movement of water and light, choreographed to music with flawless precision.

Watch a live broadcast of the Midnite Jamboree

Theater
Facebook
Email
Twitter
Pinterest
Copy link
Share
Map View
The second-longest running broadcast in history is the Ernest Tubb Midnite Jamboree, whicch is hosted at the Texas Troubadour Theatre. If you happen to find yourself in Music Valley at 10pm on a Saturday, you can be a part of the live audience. Attending the live tapings – and watching history unfold before you – is free of charge and well worth the late-night start time. Be sure to check out the show’s website for the list of artists scheduled to perform each week.

Take a ride on the General Jackson Showboat

Learn how to line dance at Wildhorse Saloon

Restaurant, American, $$$
Facebook
Email
Twitter
Pinterest
Copy link
Share
Map View
Although Wildhorse Saloon is not technically part of Opryland/Music Valley, this experience is a must-do. Shuttles from the Opryland Resort operate daily to and from Wildhorse, where guests are treated to a meal of authentic Southern food before a complimentary line dancing lesson.

Visit the Willie Nelson and Friends Museum and Nashville Souvenirs

Museum, Store
Facebook
Email
Twitter
Pinterest
Copy link
Share
Map View
Right across the street from the Opryland sits Nashville’s largest (and perhaps most interesting) souvenir store. Doubling as a museum, the Willie Nelson and Friends is devoted to honoring the legacy of the great country artist (you guessed it!) Willie Nelson, along with the friends who helped this megastar turn country music into what we know it as today. Take a tour through the museum or browse the enormous selection of Willie Nelson, Nashville and country-music souvenirs in the general store.
Give us feedback