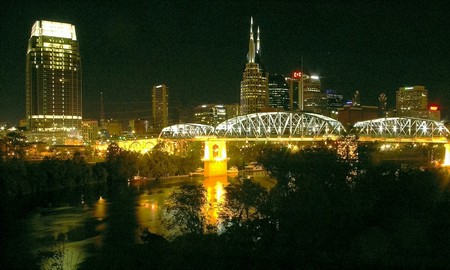 Nashville is chock-full of opportunities for both quality live entertainment and excellent food. But for those who don’t want to choose one over the other, here’s a rundown of some of the best places to catch a live dinner show.

Restaurant, American, Coffee, $$$
Facebook
Email
Twitter
Pinterest
Copy link
Share
Map View
The Family Wash has been an East Nashville favorite since it first opened in a refurbished laundromat in 2002. While it has since relocated to a larger and more prominent location on Main Street, the dive-y charm that initially kept locals loyal has not been diluted. As a live music venue, The Family Wash is known for its impressive nightly lineup of both up-and-coming and established artists (owner Jamie Rubin himself often takes the stage with his group Carpetbaggers Local 615, a rotating group of local artists which includes The Cure guitarist Reeves Gabrels). It’s important to mention that the food, too, is some of the best that you can find in the city. Hungry listeners can take advantage of the full menu of eclectic twists on Southern classics, such as Shepherd’s Pie, as well as the full-scale coffee service run by Garage Company Coffee. Food and coffee are served until midnight, so come with an empty stomach and prepared to hear some of the best live music in Nashville.
Open In Google Maps
626 Main St A, Nashville, Tennessee, 37206, USA
+16156459930
Give us feedback

As far as dinner and a show goes, you would be hard-pressed to find a more unique venue than the General Jackson Showboat. This immense two-story Victorian-style cruise ship floats down the Cumberland River and offers a breathtaking view of the Nashville skyline, in addition, of course, to its fantastic roster of daily shows. While opportunities to see live country music in the city known for it may not exactly be few and far between, the Hot Country Nights on this showboat stand out from the rest. The show features six rising voices in the genre performing songs ranging from country classics to contemporary hits, and the dinner menu includes an impressive array of Southern dishes prepared by the showboat’s sous chef. Tickets for this dinner show are a bit pricier than others, ranging from $60 per person for a basic dinner/show package to $135 for the all-inclusive Captain’s Table tickets, but the evening is certain to be unforgettable.

A photo posted by General Jackson Showboat (@generaljacksonshowboat) on Aug 13, 2016 at 4:54pm PDT

Music Venue
Facebook
Email
Twitter
Pinterest
Copy link
Share
Map View
While visitors to Nashville (or frequent viewers of the television show by the same name) are likely familiar with the famous Bluebird Cafe, those who are new to town may not be quite as familiar with The Listening Room Cafe. Since its relatively recent opening in 2006, this venue has consistently brought in some of the best artists that Nashville has to offer. During the week, the venue hosts two acoustic shows per night; these tend to range from local up-and-coming acts to established songwriters. Weekend shows vary and include both national acts and popular local bands. Setting this venue even further apart from other live music joints is its dedication to serving quality food; while its names are perhaps a bit cheesy, the full menu offering everything from ‘Opening Acts,’ or appetizers, to ‘Encore’ desserts is certainly not your average bar fare. Tickets for shows at The Listening Room also tend to be a bit easier to obtain than tickets to the Bluebird. Unlike its Bluebird counterpart, there are no policies against talking.
Open In Google Maps
618 4th Avenue South, Rutledge Hill, Nashville, Tennessee, 37210, USA
+16152593600
Visit Website
Give us feedback

Voted Nashville’s number one dinner and show, the Nashville Nightlife Dinner Theatre has enthralled thousands with its spectacular celebration of country music both past and present. The show itself includes performances of both traditional and new country songs, as well as guest appearances from celebrities such as Jeannie Seely and Diana Murrell. Not only is the show consistently impressive, but so too is the food; for $45.95/person (show-only tickets are $28), diners can take advantage of the all-you-can-eat Southern-style buffet featuring everything from fried chicken entrees to fruit cobbler. While a night at the Nashville Nightlife Dinner Theatre may be more of a tourist attraction than a regular draw for locals, it’s nonetheless a reliably entertaining option.

Located in Nashville’s Hillsboro neighborhood, Belcourt Taps is a must-visit for those hoping to hear quality live music in a more low-key atmosphere. Unlike many other music venues in the city, Belcourt Taps is dedicated to nurturing community and fostering up-and-coming voices; for the most part, all those who are interested in playing at the venue are accommodated, regardless of their experience or resumes. Not only is the vibe of this small joint pleasantly relaxed, but the food and drinks never disappoint. If you’re searching for a place to unwind and support the overwhelming talent of artists in Nashville, stop by Belcourt Taps.