Memphis-style barbecue is one of the four major regional styles of American barbecue, the other variations being Carolina, Kansas City and Texas. Characterised by the use of pork ribs and shoulders as its base, Memphis-style barbecue is slow-cooked in a pit and flavoured either with dry rub seasoning or drenched in a tasty barbecue sauce. We’ve picked out the top restaurants in Memphis for foodies to indulge in this Southern speciality. 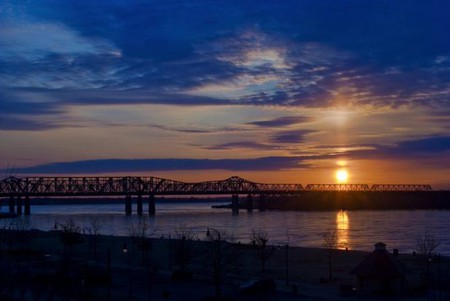 Restaurant, BBQ
Facebook
Email
Twitter
Pinterest
Copy link
Share
Map View
If one’s trip to Memphis includes flying in to Memphis International Airport, Jim Neely’s will be the first barbecue restaurant travellers will encounter, with a branch located in Terminal 2. However, Jim Neely’s main location is in downtown Memphis. Voted by USA Today as having the best pork sandwich in America, this dish is an excellent choice. Other options include the local favourite bbq nachos, beef ribs and bbq spaghetti dinner. Neely’s is a top pick for variety and taste, and the restaurant even offers an overnight service to deliver its barbecue anywhere in America in 24 hours.
Open In Google Maps
2265 South 3rd Street, South Memphis, Memphis, Tennessee, 38109, USA
+19017752304
Visit Website
Give us feedback 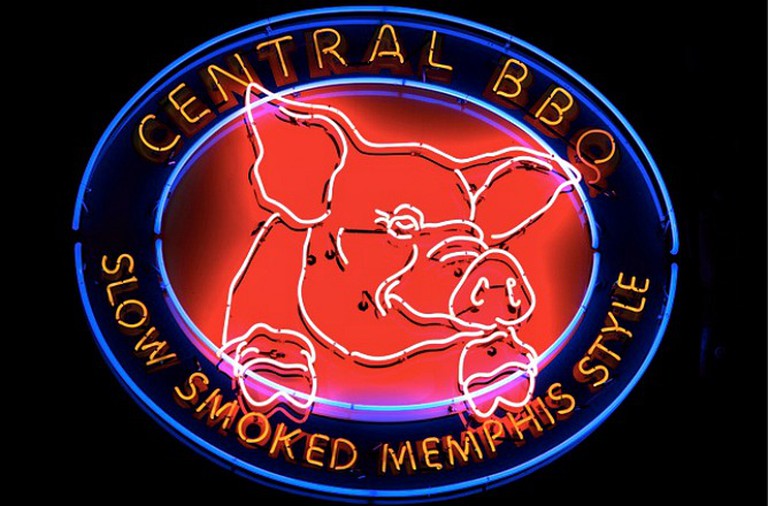 Central BBQ | © Sean Davis/Flickr
Leonard’s Pit Barbecue has been slow cooking its meat since 1922, making it Memphis’s oldest barbecue restaurant. Offering a lunch and dinner buffet in addition to its regular menu, Leonard’s serves barbecue pork, chicken, and ribs as well as catfish, hot wings and country fried steak for variety. The restaurant has been featured on the Food Network’s Diners, Drive-Ins and Dives as well as Joe Murphy’s barbecue documentary Slow Food: Fast Times. The ‘King’ himself, Elvis Presley, was a frequent guest during his lifetime. For some of Memphis’s best barbecue with a side of history, Leonard’s is your destination.
Open In Google Maps
5465 Fox Plaza Drive, Memphis, Tennessee, 38115, USA
+19013601963
Visit Website
Give us feedback

With its long-standing title as one of the top three BBQ restaurants in Memphis voted by locals, there is little reason not to eat at Central BBQ. Central slow smoked ribs, pork, chicken, turkey, beef brisket, sausage, bologna and even hot wings fill the menu. Television appearances include Pitmasters, The Best Thing I Ever Ate, Crave and BBQ with Bobby Flay. Southern sides complement the meat menu, including mac n’ cheese, greens, home cooked pork rinds, slaw and BBQ beans. Central also offers salads and a smoked portobello sandwich, so vegetarians can enjoy the menu as well.

Restaurant, BBQ
Facebook
Email
Twitter
Pinterest
Copy link
Share
Map View
Payne’s Bar-B-Que is consistently voted as one of the top Memphis barbecue restaurants. In business since 1972, Payne’s is a local institution. The pork sandwich is the highlight of the menu, served pulled, chopped or sliced with generous side of homemade slaw. Bologna and smoked sausage sandwiches also come highly recommended. With nearly everything on the menu slathered in red barbecue sauce, be prepared for a delightfully messy meal.
Open In Google Maps
1762 Lamar Avenue, Rozelle, Memphis, Tennessee, 38114, USA
+19012721523
Give us feedback

Memphis in May International Festival

Each May the city of Memphis hosts the Memphis in May International Festival downtown. One of the main events of the festival is the World Championship Barbeque Cooking Contest. Although due to local food regulations, festival goers are not permitted to sample barbecue from the contestants, the festival is full of other famous barbecue vendors and patrons will become familiar with the hottest rising stars in the barbecue scene. Memphis staple Central BBQ was founded after the two head chefs met at the World Championship Contest. The contest offers a comprehensive introduction to the wide variety of barbecue styles in Memphis and beyond.

Restaurant, BBQ, $$$
Facebook
Email
Twitter
Pinterest
Copy link
Share
Map View
Marlowe’s Ribs & Restaurant, located near Graceland, is the Memphis barbecue destination for the Elvis obsessed. Marlowe’s offers guests a free ride in a pink limo to the restaurant and serves its barbecue with a side of rock ’n’ roll crooning. Unique dishes include the Memphis pizza, topped with pulled pork and BBQ sauce. Beyond barbecue, the menu also includes a range of burgers and salads, steak and fried chicken. Open until 3am every night of the week, this place is a unique destination for a particular type of good time only Memphis can offer.
Open In Google Maps
4381 Elvis Presley Boulevard, Whitehaven, Memphis, Tennessee, 38116, USA
+19013324159
Visit Website
Give us feedback

Offering live music on the weekends and fantastic barbecue, Double J Smoke House and Saloon is for foodies who like to eat and party. For travellers enjoying a meal or even just a few drinks before heading to a game or concert at the nearby FedEx Forum, Double J offers a limo shuttle service, allowing guests to arrive safely and in style. The menu includes the barbecue classics of ribs and pulled pork sandwiches as well as some more unusual house specialties: smoked pork eggrolls and fried gator tail. Double J also has a brunch menu featuring the Memphis BBQ omelette, consisting of three eggs, the Double J pork butt and cheese.

Restaurant, American, BBQ, $$$
Facebook
Email
Twitter
Pinterest
Copy link
Share
Map View
Recently featured on the Travel Channel’s BBQ Crawl, The Bar-B-Q Shop Restaurant is another one of Memphis’s consistently rated top-spots. Its famous barbecue sauce recipes are over 50 years old and The Bar-B-Q Shop has been using its dry rub blend since the 1980s. These make the restaurant an excellent stop for those who favour both the ‘wet’ and ‘dry’ varieties of Memphis barbecue. The Bar-B-Q Shop also sells its sauces and dry rub under the name Dancing Pigs for those patrons who cannot get enough.
Open In Google Maps
1782 Madison Avenue, Midtown, Memphis, Tennessee, 38104, USA
+19012721277
Visit Website
Give us feedback 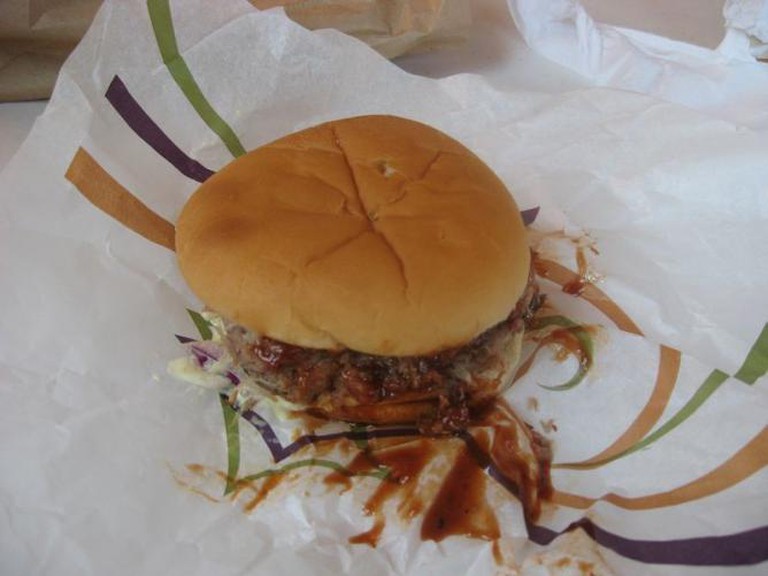 Tom's Sandwich | © Rien T. Fertel/Flickr
Featured on Diners, Drive-Ins and Dives, Tom’s Bar-B-Q may be just as famous for its homemade strawberry shortcake as its world famous rib tips. In addition to smoking pork and beef, Tom’s also serves ham, chicken, hot dogs, bologna and even a smoked gyro. Sides include potato salad and macaroni salad in addition to the standard slaw and BBQ beans. Try the deviled eggs and smoked corn on the cob as well. Tom’s has been a Memphis favourite for over thirty years and is located near the Memphis Airport, just off Highway 176.
Open In Google Maps
4087 New Getwell Road, Oakhaven, Memphis, Tennessee, 38118, USA
+19013656690
Visit Website
Give us feedback

Restaurant, North American, $$$
Facebook
Email
Twitter
Pinterest
Copy link
Share
Map View
Located on the outskirts of East Memphis in the suburb of Germantown, Germantown Commissary is named after the country general store that formerly occupied its building for over 90 years. Guests can enjoy all you can eat ribs on Monday nights. One of the house specialties is BBQ Shrimp, served with fries, slaw, a deviled egg and French bread. The Commissary has also played host to several celebrity guests over the years, including Tim McGraw, Jimmy Buffet, and Aerosmith. Like its namesake, the Germantown Commissary also offers its barbecue sauces and seasonings for sale.
Open In Google Maps
2290 South Germantown Road, Germantown, Tennessee, 38138, USA
+19017545540
Visit Website
Give us feedback
Give us feedback