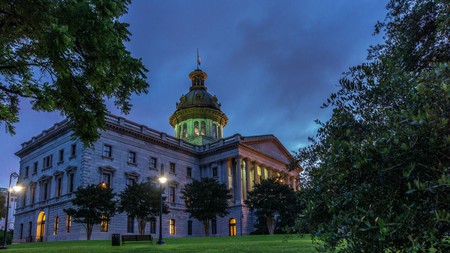 The college town of Columbia is full of character, historical buildings, wide avenues and museums. Its culinary tradition is built on local BBQ, burger joints and comforting Southern cuisine, served up in innovative ways and unique settings. Get stuck in to some great food at these top South Carolina restaurants.

Restaurant, American, French, Italian, European, $$$
Facebook
Email
Twitter
Pinterest
Copy link
Share
Map View
Saluda’s, a mainstay of Columbia’s restaurant scene, can be found in the renovated VFW Officers’ Club. The perfect spot for relaxed fine dining with a southern twist, the restaurant’s interior setting is open and elegant, with a gorgeous 1880s mahogany bar reclaimed from the Blakely Hotel in Philadelphia. Using the freshest ingredients from local South Carolina farmers and fishermen, Chef Blake Fairies uses cutting-edge techniques to put a Southern stamp on classic French and Italian cuisine. His creations include the ever-popular sweet tea pork chops, and shrimp and grits topped with Korean spices and fried green tomatoes. If possible, get a table on the balcony for a romantic meal on a summer’s evening.
Open In Google Maps
751 Saluda Avenue, Midtown - Downtown, Columbia, South Carolina, 29205, USA
+18037999500
Visit Website
Give us feedback

Barbecue is a central part of South Carolina life, and one of the best places to try it out is Little Pigs Barbecue. Serving a huge range of barbecue, ribs, brisket, pork chops, chicken wings and many more home-cooked dishes, using three different styles of barbecue marinade, the food is consistently tasty, with that unmistakable hickory smoked flavour. No wonder it is regularly cited as the best barbecue in Columbia, with a handful of awards to its name. 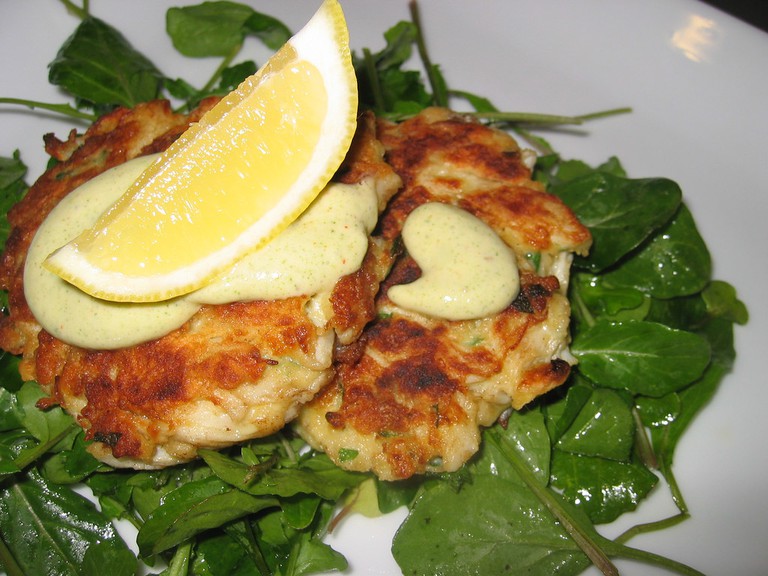 Just like Saluda’s, Mr. Friendly’s is hidden away in Five Points, a historic area full of bars and galleries, known for its laid-back, hip vibe and popularity with the students at the nearby University of South Carolina. It was founded as a sandwich and cookie shop in the early 1980s, but since 1995, Mr. Friendly’s has operated as a café serving ‘new Southern cuisine’. Frommers even calls this award-winning eatery ‘one of the finest and most innovative restaurants in South Carolina’, with its gourmet versions of classic dishes. Try the pecan crab cakes, fried oysters, buttermilk fried chicken or the grilled filet mignon wrapped in bacon and pimento cheese. The café’s whitewashed brick walls, covered in art, serve as the backdrop for a chilled-out afternoon. 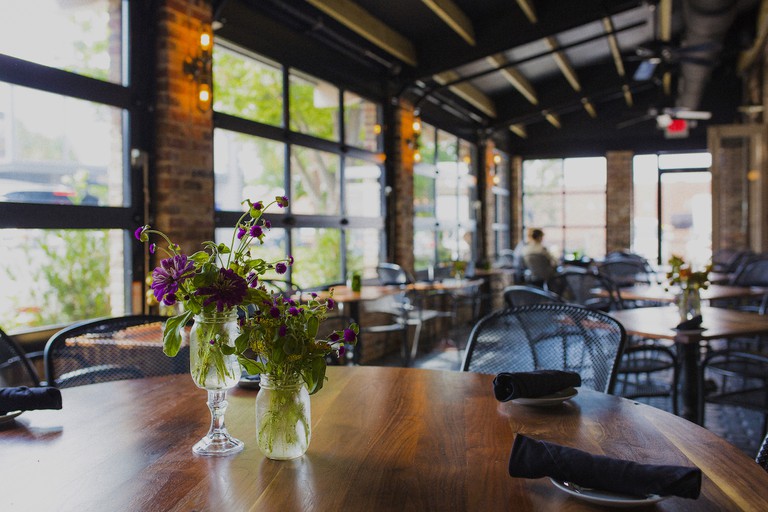 The quirky and characterful Motor Supply Company Bistro is the epitome of Columbia’s slow food, farm-to-table movement. Since 1989, when it opened in a renovated 1800s engine supply building, Motor Supply Co. has been at the heart of the historic Congaree Vista scene. It serves the most innovative and eclectic food using the freshest of ingredients and, in keeping with this spirit, the menu changes twice a day. Expect delicious creations such as molasses-brined pork porterhouse over Creole creamed corn, topped with local peach jam, and spicy marinated white shrimp in coconut and red curry clam broth, with kimchi.

For some of the freshest seafood and best atmosphere around, try Pearlz Oyster Bar. This rustic restaurant serves up a mix of shellfish and local seafood, and is part of the Sustainable Seafood Initiative. The raw bar offers a range of oyster varieties, including Low country and Gulf oysters, while the rest of the menu consists of all manner of seafood concoctions, including tuna tartar, steamed mussels and oyster sliders. Pearlz is also famed for its signature oyster shooters; Pearlz Black Pepper Vodka, oysters and cocktail sauce. It also has its own line of award-winning draft beers, the TBonz Homegrown Ales, which are the perfect accompaniment to the spicy peel-and-eat shrimp. There’s also a jazz and blues music lounge upstairs, perfect for post-dinner drinks.

Restaurant, American, $$$
Facebook
Email
Twitter
Pinterest
Copy link
Share
Map View
Pawleys Front Porch is a South Carolina institution, with a branch in Mount Pleasant and one on Harden Street in Columbia. This burger joint is consistently nominated for local awards for its innovative burgers. Chef Kyle Taylor conjures up some unique combos that are bursting with flavour, such as the Isle of Palms burger, with homemade pimento cheese and jalapeno bacon, and Fripp Island burger, southern salsa, boursin cheese and fried green tomato. Keep an eye out for their award-winning food truck, which parks up at the Soda City Market every Saturday.
Open In Google Maps
1001, 827 Harden Street, Midtown - Downtown, Columbia, South Carolina, 29205, USA
+18037718001
Visit Website
Give us feedback

Restaurant, Seafood, American, $$$
Facebook
Email
Twitter
Pinterest
Copy link
Share
Map View
Blue Marlin is the first ocean-to-plate sustainable restaurant in Columbia, and is a must-try for seafood lovers. Situated in a former train station in the heart of the Vista, Blue Marlin takes its historical roots seriously; its cooking is inspired by the flavours of Cajun, Creole and Low Country cuisine, which in turn has influences from the African, West Indian and Caribbean traditions brought over by the slaves who worked on the plantations. These include their award-winning signature dish, Blue Marlin shrimp and grits, served with Andouille sausage and gravy. Other highlights include oyster and shrimp skillet Bienville, and salmon Pontchartrain, served with blackened shrimp, scallops, mornay sauce and grits cakes. This is the true flavour of the South.
Open In Google Maps
1200 Lincoln Street, Midtown - Downtown, Columbia, South Carolina, 29201, USA
+18037993838
Visit Website
Give us feedback 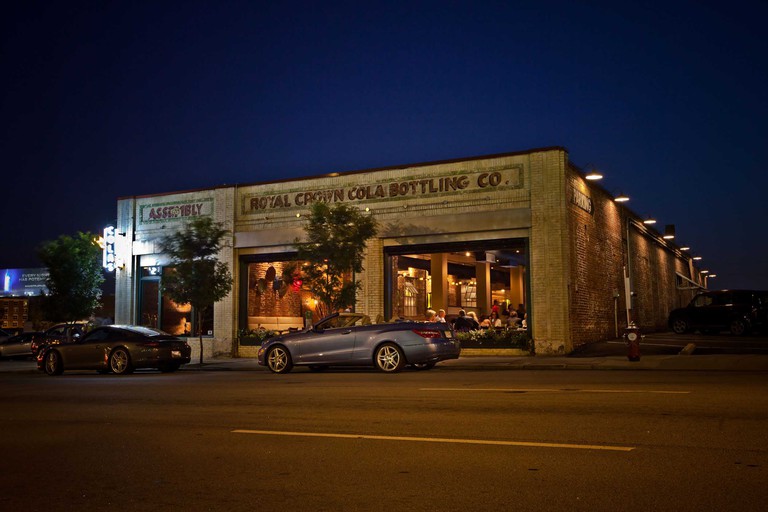 From the family behind Garibaldi’s, another favorite of the Columbia dining scene, Cola’s is a culinary destination for the true foodie. Located in a restored 1930s RC Cola bottling plant, with exposed brick walls and huge windows straight out of an Edward Hooper painting, Cola’s has plenty of character. The two garage doors even open up to views of the antebellum Statehouse. The restaurant’s name refers to building’s old function, as well as the city’s endearing nickname for itself. Cola’s serves imaginative American cuisine with an Asian influence, with a focus on fresh and locally grown ingredients. Try the pulled pork BBQ egg rolls, almond crusted tilapia, and the crispy flounder, a dish originally made famous by Cola’s sister restaurants at Dining Group South.