The Best Hotels to Book Near the Citadel, Charleston 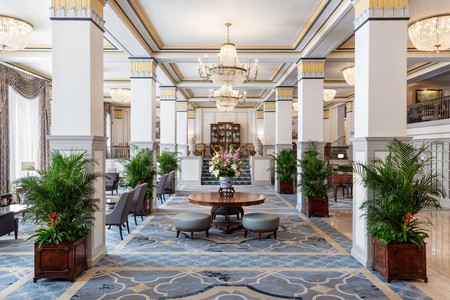 Want to stay in style around the historic part of this South Carolina city? Simply book your Charleston hotel with Culture Trip and you’re ready to roll.

The Citadel, also known as the Military College of South Carolina, has been a Charleston institution for close to two centuries. While most guides to Charleston focus on the French Quarter, the Historic District or King Street, we know you may have something different in mind – whether it’s game day or you’re visiting your cadet for the first time. Before you decide where to lay your head for the night, read on for our top hotels close to the Citadel, Charleston.

The Quarters on Spring 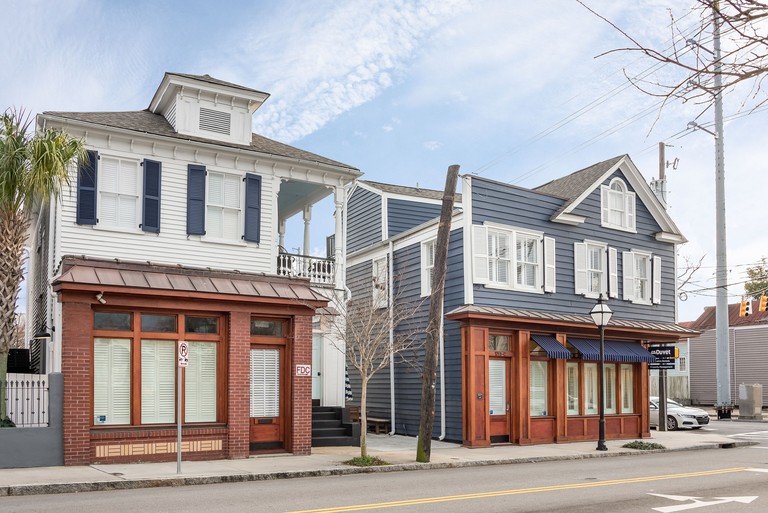 Courtesy of The Quarters on Spring / Expedia
If you’re looking to feel at home in Charleston, opt for one of the Quarters’ properties along Spring Street, where you can pick from renovated carriage houses, studios, row homes and new constructions. You’re in the heart of Cannonborough-Elliotborough, a historically residential neighborhood – and better yet, you’re easily within walking distance of the Citadel to the north, or the festivities on King Street to the east. You’ll also have plenty of places to eat along Spring Street, including Bon Banh Mi Southeast Asian Kitchen, with its build-your-own banh mi sandwiches, and Fuel Charleston, which serves pub grub with a Caribbean twist. 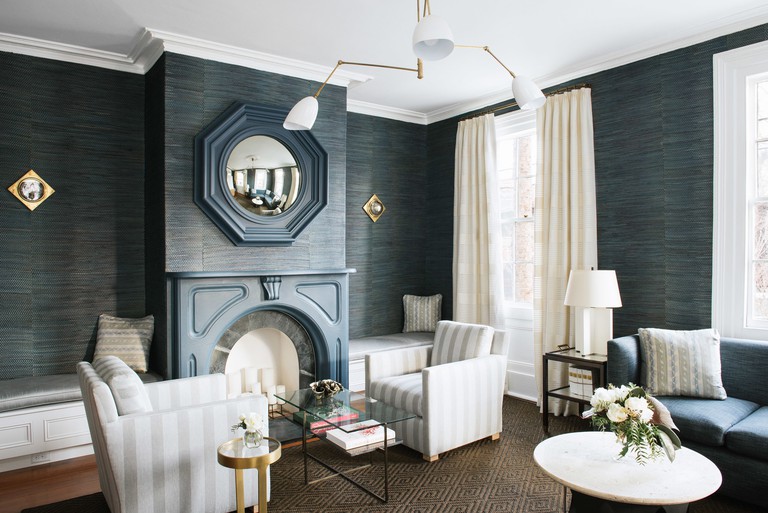 Courtesy of 86 Cannon / Expedia
Live in luxury in one of the five king-size suites at this three-story, 1860s home in Cannonborough-Elliotborough – there are also two cottage suites next door. The adults-only inn is spacious, and rooms are plastered in fun, bright wallpapers and plenty of details painted in the Lowcountry’s classic haint blue. Some of the top meals in town, including the seafood at the Ordinary and wood-fired pizzas at Indaco, are all yours a five-minute walk away – and it’s a short drive to the Citadel. 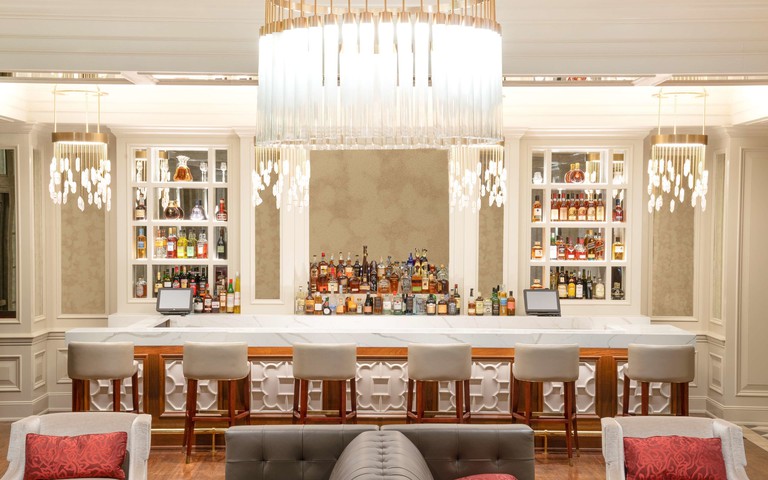 Courtesy of Hotel Bennett / Expedia
On the edge of Charleston’s iconic Marion Square, Hotel Bennett is the perfect half-way point between the Citadel and the action in the French Quarter. The 179 guest rooms and suites are chock-full of amenities including deep-soaking tubs, marble-lined showers and built-in mini-libraries. With the King’s Club, you’ll also have access to an open bar, meals and quick bites throughout the day, as well as a personalized itinerary during your stay. Don’t miss the Charleston Farmers Market in the square below every Saturday, where you can pick up fresh produce, snacks and souvenirs.

Courtesy of The Dewberry / Expedia
On Marion Square, next to the Citadel Square Baptist Church, the Dewberry is a midcentury-modern-inspired hotel filled with light and luxury – think floor-to-ceiling windows, expansive mirrors above the bed and cast-iron tubs. Local touches lift the place throughout, from furniture upholstered with art by Charlestonian artists to spa treatments made from the area’s native dewberry plant. Get around town on the hotel’s complimentary 21-gear bicycles – ask the concierge team if you’re looking for a guided route – or take one of the house cars for a drive up to the Citadel. 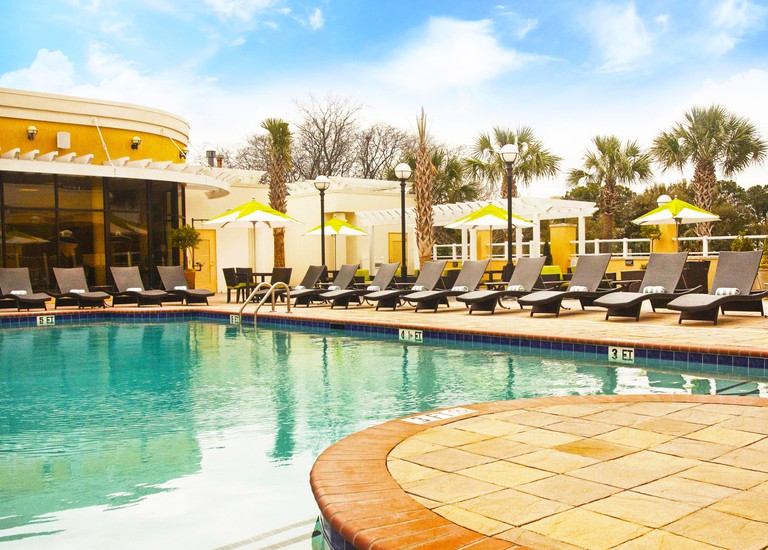 Courtesy of Charleston Marriott / Expedia
You can’t get much closer to the Citadel than this: the Charleston Marriott is just a few minutes’ walk away, and a stone’s throw from Johnson Hagood Memorial Stadium. It also overlooks Brittlebank Park, which runs along Ashley River, and has plenty of parking options nearby. Grab breakfast a block away at BKeDSHoP, which fries up french-toast donuts, apple fritters and ham-and-cheese-topped pretzels, while brewing the creamiest cinnamon-bun iced coffee in town. To see the rest of town, just hop on one of Charleston’s main highways – several converge close to the hotel. 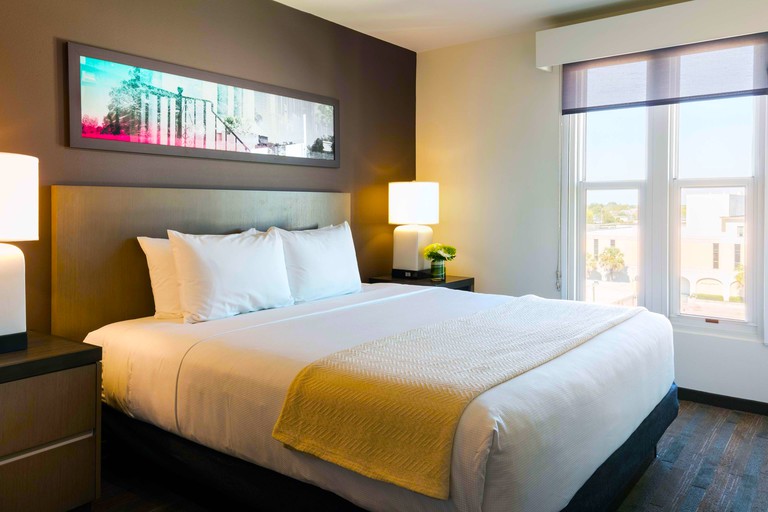 Courtesy of Hyatt House Charleston/Historic District / Expedia
Get ready to explore the whole of King Street – one of Charleston’s main drags – from the Hyatt House, with its gentlemanly monochrome rooms and suites. Try all the stops along the way – from the Parisian-style tapas at Felix Cocktails et Cuisine to the jazz-inspired drinks at Prohibition – or whip something up back in the room, which comes with a fully equipped kitchen. Fill out a request form and the fridge will come fully stocked, too. The Citadel is just a seven-minute drive away, and back on King Street, you can park at the city garage next to the hotel. 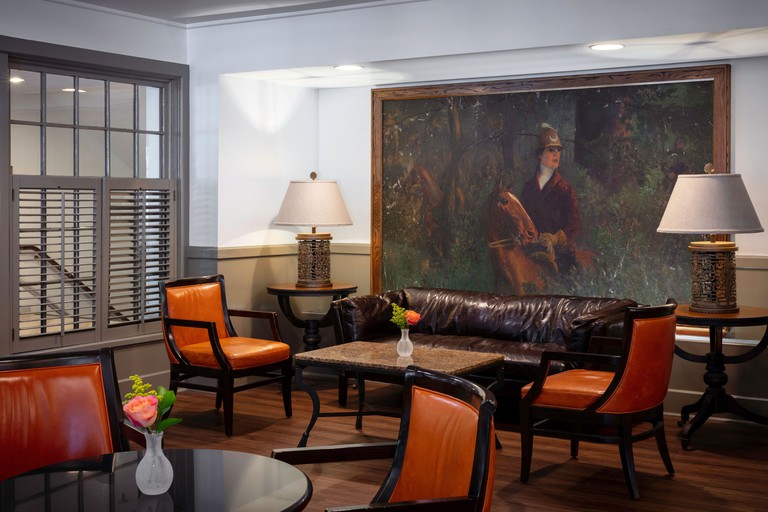 Courtesy of Francis Marion Hotel / Expedia
Perhaps one of the most well-known hotels in the area, the Francis Marion is a King Street staple on Marion Square. The 12-story spot, named after a local Revolutionary War hero who also went by the monkier “Swamp Fox,” is old-school and old-money: Carolina-blue walls, two-poster king-size beds and intricate glass chandeliers abound. In the hotel’s restaurant, Southern-style fare such as fried green tomatoes, shrimp and grits, and bacon and cheddar hush puppies are all on the menu – and all delicious. 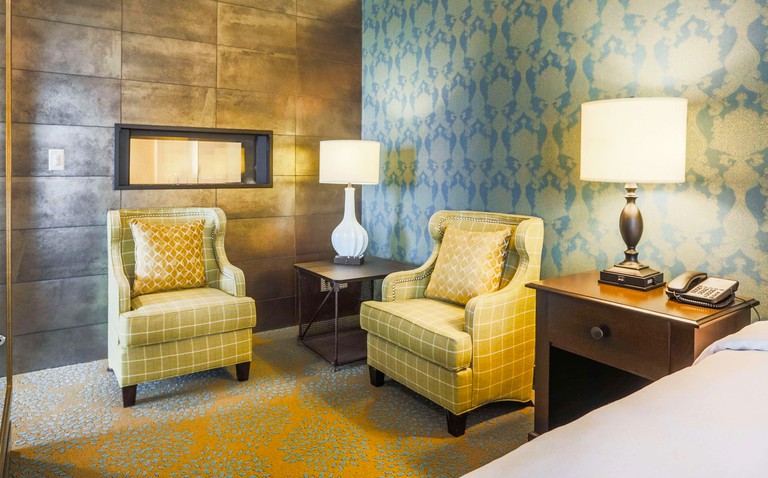 Courtesy Homewood Suites by Hilton Charleston Historic District / Expedia
Tucked a block away from Upper King Street, this recently built hotel draws inspiration from its centuries-old colonial neighbors. The lobby features expanses of exposed red brick and a freestanding fireplace, while rooms – all fully equipped suites – are resplendent with textured wallpaper, Moravian-star light fixtures and patterned curtains. Don’t miss the pool and patio area out back, or explore nearby – the Charleston Museum is a five-minute walk away, while East Side Soul Food, just three blocks over, will steal your heart with its fried chicken, barbecue ribs and okra soup.