With an abundance of farmland and a close enough proximity to the sea, there’s plenty of fresh food for South Carolina’s best chefs to turn ingredients into meals that are worth writing home about. We’ve rounded up 10 of the best restaurants in Columbia, no matter if you’re looking for something casual or maybe a more upscale dinner. 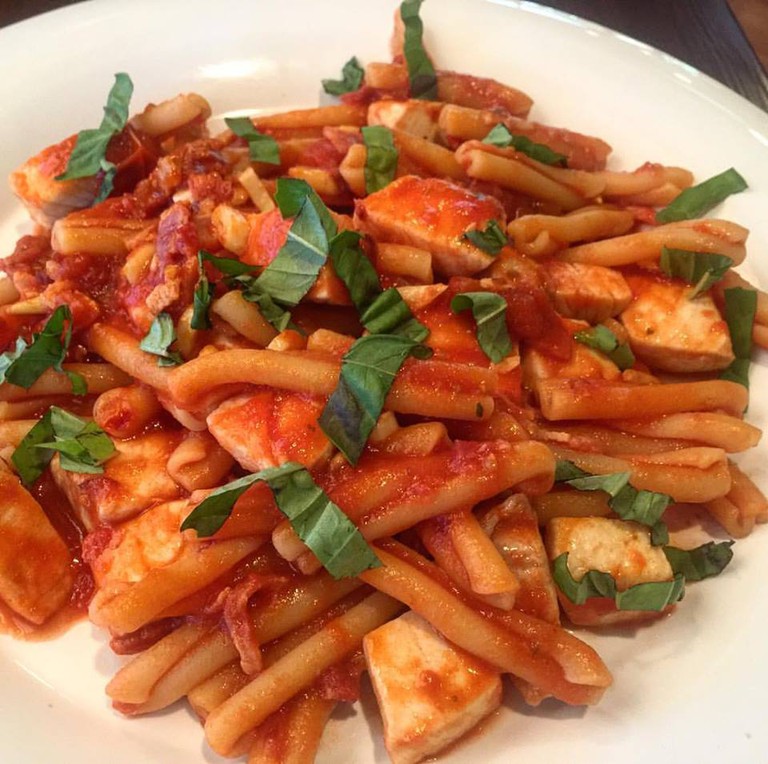 Simultaneously fancy and casual, with food that’s both high end and approachable, George and Monica Kessler have created in Il Giorgione a place reminiscent of what one might discover stumbling upon an alleyway in Italy. Their passion for the food they create is evident in the hand-pulled mozzarella cheese and use of San Marzano tomatoes to create simple, rustic dishes that taste authentic, even if you’ve never been to the homeland yourself. Simple but elegant pizza and pasta dishes feature heavily on the menu, with classics like margherita pizza and spaghetti carbonara, plus nightly specials.

A Columbia dining staple since 1989, Motor, as it’s affectionately known, features a farm-to-table dining experience that changes so frequently the handwritten menus aren’t even available until just before lunchtime each day. Relying on the offerings from local farmers, Chef Wes Fulmer and head barman Josh Streetman create dining and imbibing experiences that etch deeply into diners’ memories, leaving them with memories of an elegant yet relaxed experience that will bring them back for more. Though it comes across as a special-occasion restaurant, Motor also makes for a perfect weeknight dinner or lunch with favorite coworkers. 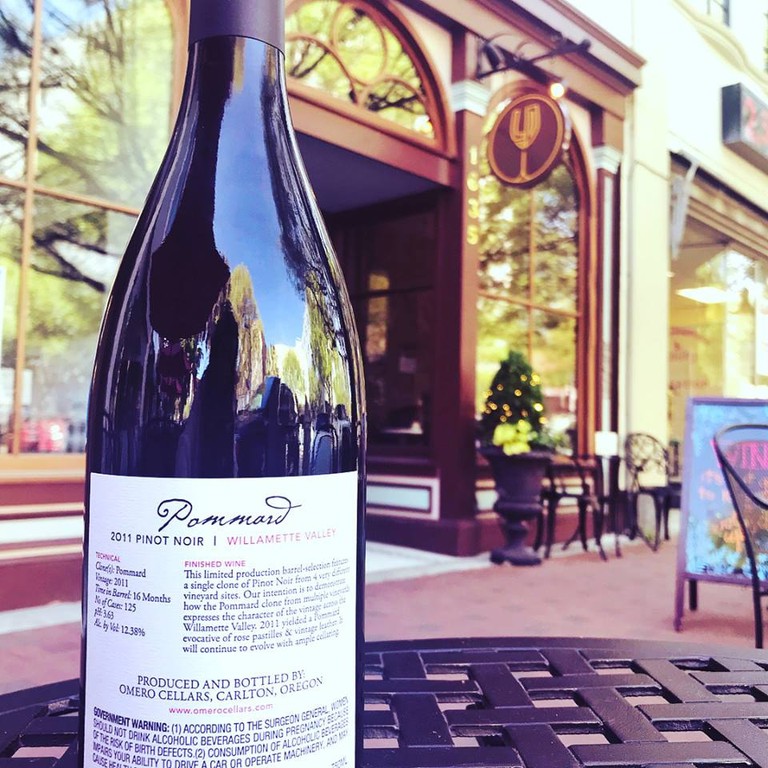 History runs deep at Lula Drake, named for a former tenant who owned a hat shop in the same space in the early 1900s. Today, original elements from the building were tediously preserved to lend a hauntingly beautiful and upscale atmosphere to the wine bar with an impeccable menu. Behind the expansive polished wood bar, proprietor and sommelier Tim Gardner can recommend a wine to suit any taste, and he also offers samples for the nascent wine drinker. In the kitchen, Chef Pierce Bowers has a small space and huge imagination in which to work, churning out hand-shaped pastas and other inventive, seasonally driven dishes—compressed heirloom watermelon salad, anyone? 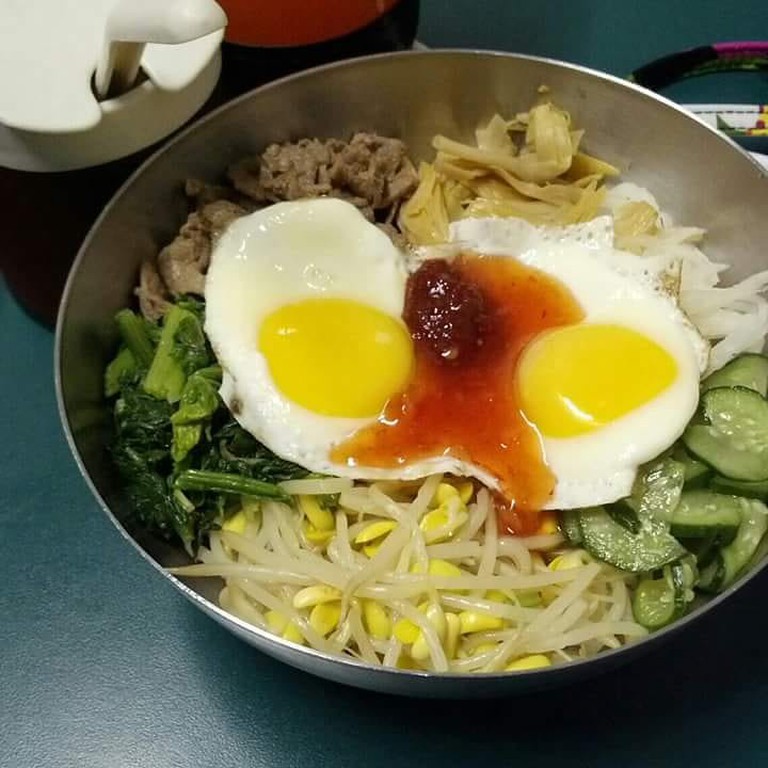 Korean and Mexican fusion coexist together at the Blue Cactus, with bulgogi just a menu page away from ropa vieja and Cuban black beans. The Blue Cactus is known around town for being slow and as sassy as they want, and for customers to always clamor for more bibimbap. The family-owned restaurant is located in the Five Points neighborhood and has been arrogantly slow since 1994. 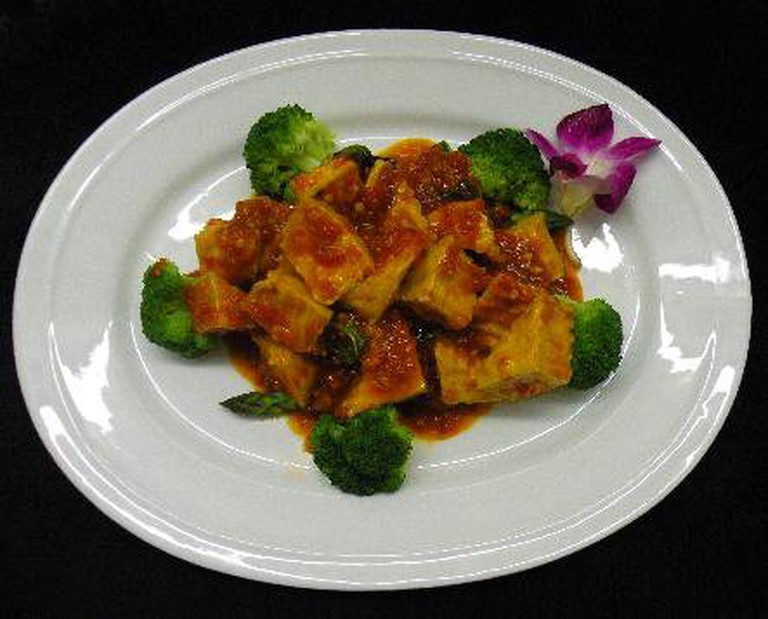 You wouldn’t expect much from seeing this plain-front strip mall restaurant from the road, but upon entering the doors, you’re swept into a modern-cool paradise that smells tantalizingly of garlic, ginger, and cooking meats scenting the air. In addition to a full Thai menu with favorites like drunken noodles and panang curries, Mai Thai also offers a bakery and bubble tea menu for a sweet experience from start to finish. 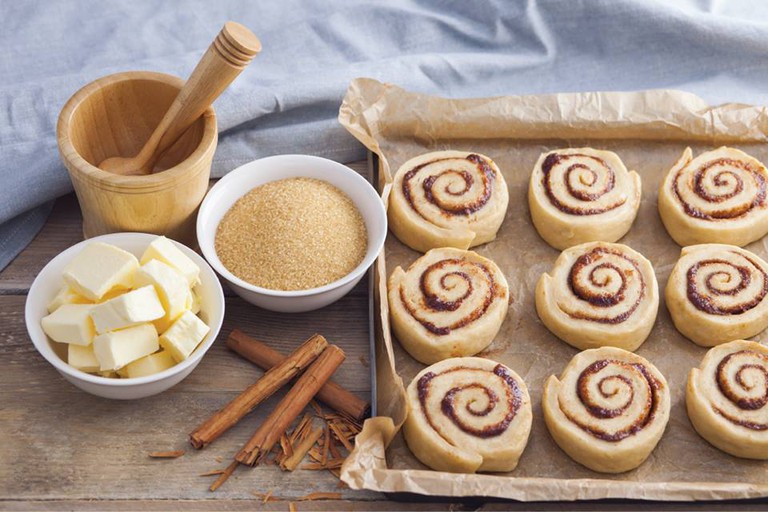 People stand in line nearly daily at this deli for more than cinnamon rolls, because everything on the menu is worth it. Inventive meat-vegetable-cheese combinations atop a fluffy bun, zippy salads, and of course, the deceivingly named mini cinni rolls keep people coming back and telling their friends to come, too. Owned by mother-and-son team Jody and Richard Kreush, these locals give their dishes amusing names, like the Aunt Patty Melt, which is composed of rye bread, Swiss cheese, roast beef, grilled onion, and a choice of sauce—just like your own favorite aunt. 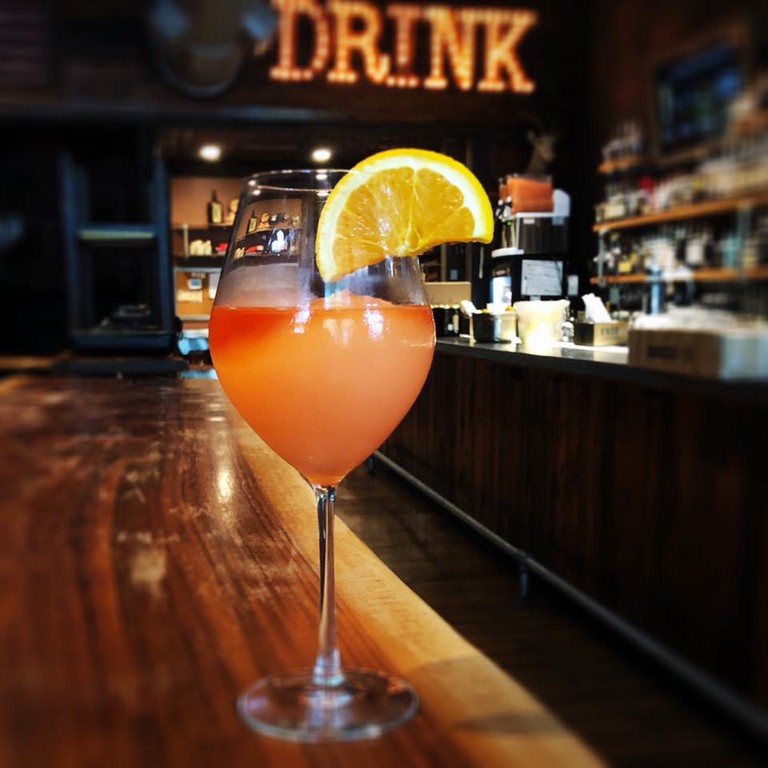 A shrine to the whiskey variation, Bourbon houses more than 400 types of bourbon and makes damn good cocktails out of them. There are also some bourbons so smooth it would be a crime not to enjoy them neat. A large lit sign on the wall encourages all to “drink.” The chef-driven, Cajun-Creole menu perfectly complements the saloon-style space and brings a spicy flair from the Gulf up to the central Carolinas. 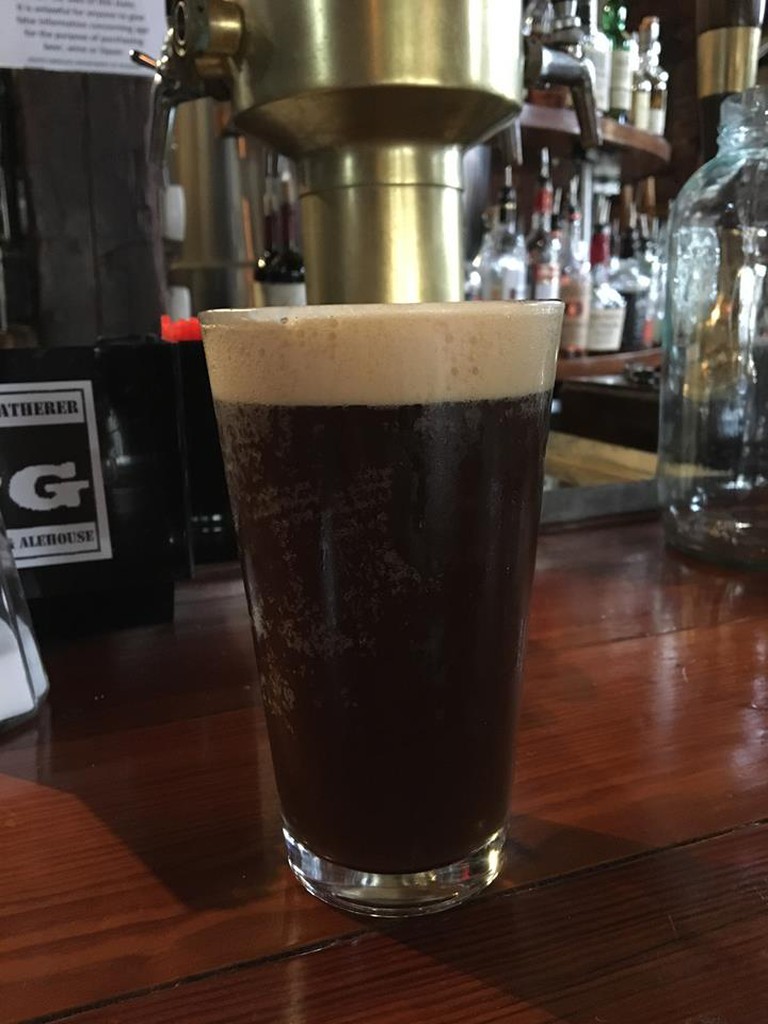 Before craft beer was cool—way before, in fact—Hunter-Gatherer was churning out house-made beers in huge metal tanks right behind the bar and in front of all of the tables in the entire restaurant. Upscale, imaginative food choices have always been paired with the staple beers, which have changed so little that owner and brewer Kevin Varner has gotten them down to a science. The kitchen serves up a combination of staple favorites like its ESB black bean dip, infused with its ESB beer, and inventive seasonal dishes that make use of local meats and vegetables.

A Peace of Soul Vegan Kitchen 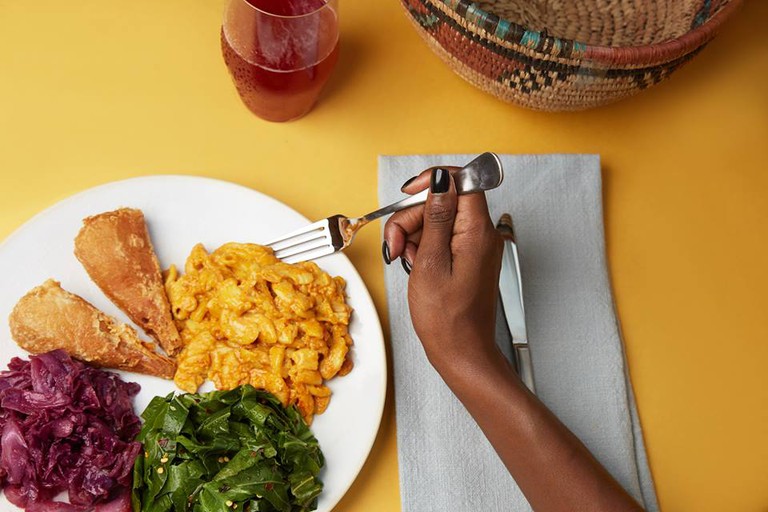 A Peace of Soul Vegan Kitchen has been serving up vegan soul food since before it was cool | © A Peace of Soul Vegan Kitchen
Veganism isn’t the biggest trend in the South, but the restaurant formerly known as Lamb’s Bread has been a vegan paradise for those who are of that persuasion and even those who aren’t with its imaginative use of fresh vegetables and vegetable proteins. Using special methods, it is able to make vegan versions of wings, barbecue, burgers, and sausages that would satisfy any carnivore. Its soul food twist on healthy cooking and its mac and cheez is not to be missed.
Open In Google Maps
2338 Main Street, Midtown - Downtown, Columbia, South Carolina, 29201, USA
+18032537889
Visit Website
Visit Facebook page
Give us feedback 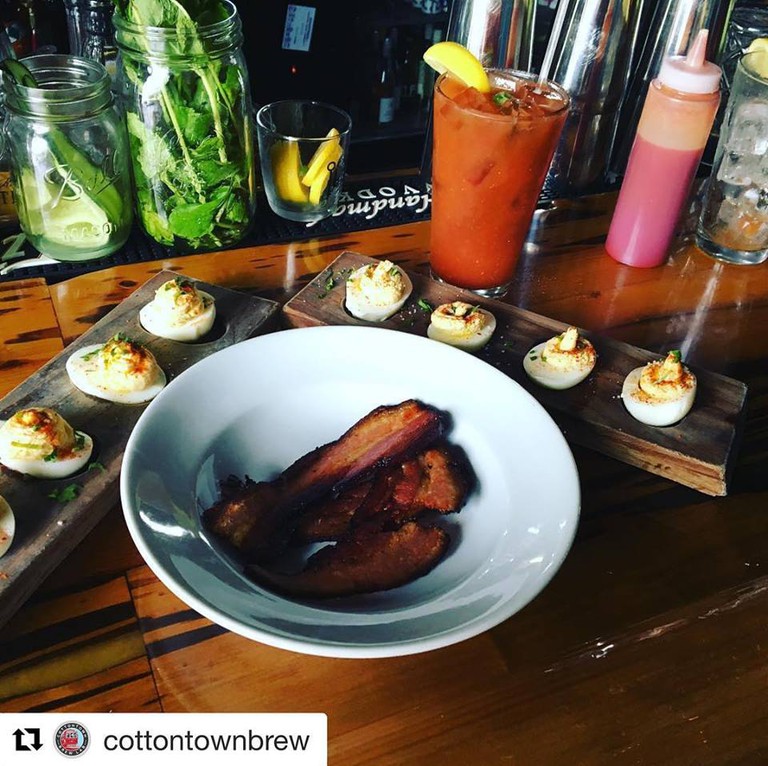 Southern food gets a gourmet touch at War Mouth, and the cocktails get inventive | © War Mouth

If you know that a war mouth is a type of freshwater fish, you’ll know what you’re in for at War Mouth. Southern cooking techniques and ingredients are the star here, and the chef and bartender keep the menu interesting with seasonally rotating ingredients, even changing out items and adding specials by the week to accommodate the freshest ingredients. War Mouth features traditional South Carolina fishes like chicken bog and catfish, and has a barbecue plate mix with inventive pickle plates and pimento cheese smashed potatoes for a true taste of Columbia.