Providence has dubbed itself the ‘Creative Capital’ of Rhode Island, a title which it fully deserves. Brimming with institutes of learning, technology, art and design, the city can’t be faulted for its creative output. The culinary scene in Providence is just as vibrant, with the lines between art and food often blurring. Here are 10 of the best restaurants in Providence. 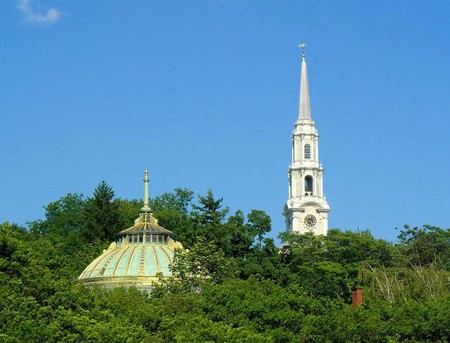 Bar, Restaurant, European, $$$
Facebook
Email
Twitter
Pinterest
Copy link
Share
Map View
Constructed in 1901, the building where The Dorrance now serves up traditional New England fare was once home to the Providence Federal Reserve. The opulence of the interior, the glittering chandeliers and the stained glass windows have all been preserved, and the quality of the venue is gratifyingly matched by the dishes on offer. The award-winning kitchen is run by the Lester family, who work to ensure the ingredients they source are of the highest quality. On the menu are moreish delights such as squid frites and curried cauliflower, while the wine list includes a selection of Tuscan reds transported over from their family estate in the Italian foothills. The Dorrance bar stretches across across the room beneath a balustraded balcony and maintains a well-deserved reputation for high-class cocktails. The restaurant is ideally located for lovers of theatre, as both the The Trinity Repertory Company and the Providence Performing Arts Center are just a short walk away.
Open In Google Maps
60 Dorrance Street, Downtown Providence, Providence, Rhode Island, 2903, USA
+14015216000
Visit Website
Give us feedback

Farmstead, Inc. has become a local institution in regards to locally sourced, sustainable ingredients, with the kitchen winning numerous awards to that effect. Owners Kate and Matt Jennings run the restaurant and the shop next door, selling artisan cheeses, cured meats and melt-in-your-mouth pastries. Among the customer favourites are the candied nuts and the blue cheese shortbread. Farmstead, Inc. acts as a cultural culinary centre, putting on workshops to teach guests about sustainable cooking and the provenance of ingredients. The menu is dictated by the seasons and as a result is in constant flux, but with a butcher and master baker on the premises, the quality of the creations never drops. Wines and ales come from both local and international suppliers, meaning there is always something novel to pair with the cheese and charcuterie boards that Farmstead, Inc. does so well.

The Pot Au Feu is widely regarded as the place to go for French cuisine in town. The restaurant is tucked away in the Wilcox Building, which was built in 1875 and was one of the most expensive constructions of its time. As you enter, stone flora and fauna peer out at you from atop the pillars surrounding the building, while downstairs chisel marks can still be seen on the carved stone blocks. Excellent food and fine wine is of course the order of the day, with foie gras, bouillabaisse and escargots among the traditional dishes on offer. In a restaurant with a deep love of French cuisine and culture, it is not unknown for champagne bottles to be opened here with a sabre. In the spirit of sharing all things French, the Pot Au Feu offers day cooking classes which include a wine seminar and the preparation of a five-course meal.

AS220 FOO (D) serves as both as place to eat and a place to meet for those living and working in the Empire Street arts complex. Galleries and artist studios make up the 24,000 square foot premises provided by the arts initiative AS220. In the café, the atmosphere is low-key and relaxed, with a range of healthy dishes sourced from local suppliers. Order the ‘house made sweet potato burger’ and you’ll be getting slices of thick white bread filled with black beans, spinach and spicy vegan aioli. The adjacent bar serves beer and wine from New England breweries, with a row of ever-changing beers on tap. Drink with a clear conscience as all the proceeds go to keeping the AS220 arts and performance spaces running.

Diner, Restaurant, Steakhouse, $$$
Facebook
Email
Twitter
Pinterest
Copy link
Share
Map View
Lou Cruz and his team at 10 Prime Steak & Sushi have taken the idea of surf and turf to new heights. The restaurant is having its cake and eating it here, serving up award-winning sushi and then doing it again with their prime cuts of Angus beef. Artwork adorns the walls of a cobalt blue interior, ensuring sensory stimulation doesn’t end with your taste buds. The steaks at 10 are aged for at least a month and portions can be pared down to suit the diner. Not to be outdone, the sushi platters are sumptuous, and the rich variety of New England seafood allows for signature rolls combining lobster, crab and caviar. Right in the centre of Providence’s cultural heartland, 10 is ideally placed to work into a day of visiting the nearby galleries, museums and theatres.
Open In Google Maps
55 Pine Street, Downtown Providence, Providence, Rhode Island, 2903, USA
+14014532333
Visit Website
Give us feedback

Gastropub, Pub Grub, American, Seafood, $$$
Facebook
Email
Twitter
Pinterest
Copy link
Share
Map View
The Black Pearl is a 45 minute drive out of town to the waterfront in Newport, but is well worth the trip. An old sail loft built in the 1920s was bought by a yachtsman in the late 60s and transformed into a seafood restaurant. Under the same management for over thirty years, the restaurant has built up a solid reputation of serving high quality dishes in its unique setting. Start with a shrimp bisque or clam chowder, and for an entrée take your pick of their salmon, crab and scampi creations. The Black Pearl is divided neatly in two. On the one side, The Commodore’s Room offers a fine dining atmosphere with dark green walls showcasing 19th century sailing prints. On the other side sits The Tavern, where you’ll find nautical maps of bygone times and cable-reel tables to seat yourself round for an evening meal.
Open In Google Maps
30 Bannister's Wharf, Newport, Rhode Island, 2840, USA
+14018465264
Visit Website
Give us feedback 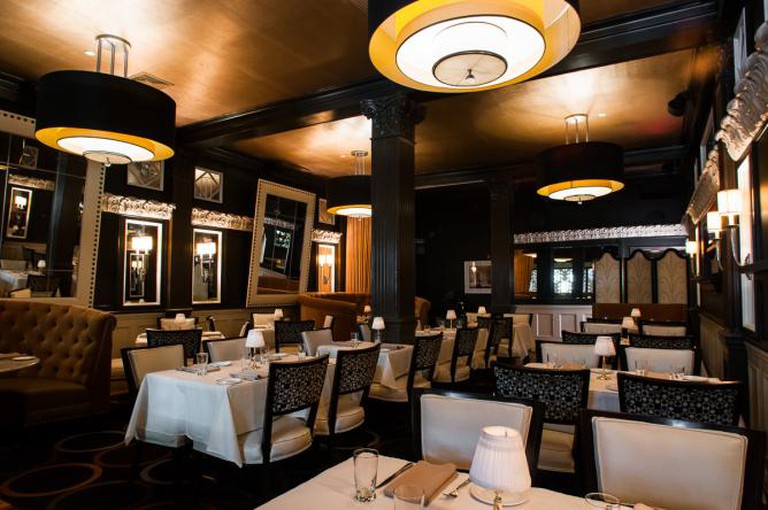 Courtesy of Local 121
Local 121 has its roots deep in the Rhode Island arts scene. It makes up part of the old Dreyfus Hotel, which dates back to the 1890s. The building lay abandoned for many years until the mid-2000s, when the space was bought up by the arts initiative AS220 to be converted into a series of studios for local artists and performers. In keeping with the ethos of AS220, Local 121 plays its part to support local artists and small scale farms. Dining here you will therefore encounter a menu filled with lovingly prepared organic produce. Local cheese-makers, brewers and artisans all form part of Local 121’s food cycle. As a means of promoting the creative industries, artwork fills the restaurant, from the dishes the food is served on to the photography on the walls.
Open In Google Maps
121 Washington St, Providence, Rhode Island, 2903, USA
+14012742121
Give us feedback

Upon entering the old Pilgrim’s Mill, visitors are greeted by the aroma of fine cooking and the warmth of a wood-burning oven. In keeping with its history, the interior of Mill’s Tavern is all red brick walls, dark wood and vaulted ceilings. Its circular booths look out through bay windows onto the tree-lined street beyond. The menu changes with the seasons though is generally a fusion of French and American cuisines. Making a trip to the Tavern doubly worth it is its proximity to the Providence Arts Club. The arts establishment sits on the next road along, and has a rich history with a free gallery open to the public.

A seafood grill and oyster bar not to be missed, Hemenway’s was named in memory of the founder’s fisherman grandfather. It’s a riverside restaurant that prides itself in the variety and quality of its menu, excelling in clam, calamari, mussel, squid and scallop dishes. Nestled between the Woonasquatucket river and Brown University, Hemenway’s is a perfect place from which to explore the city. A short walk away are the museums of the Rhode Island School of Design and the John Brown House. On a Monday, Hemenway’s Raw Bar is half price, making it the ideal opportunity to tuck into their Alaskan King Crab cocktails and Cherrystone clams. If you feel like a change from seafood then there is always the Guinness-brined pork chop with cheddar, bacon, scallion mash, and a Guinness balsamic glaze to top it all off.

Bar, Restaurant, Spanish, $$$
Facebook
Email
Twitter
Pinterest
Copy link
Share
Map View
French and Italian are not the only Old World cuisines making their mark on the Providence food scene. Flan Y Ajo is doing a tremendous job bringing the best of Spanish tapas to the centre of town. A tiny little place where your food is prepared in front of you, the restaurant has a few tables inside and, when the sun is shining, a couple more on the street outside. You’ll find the traditional flavours of Spain here, with succulent jamón Ibérico, grilled peppers and slices of white bread drenched in rich olive oil. If there’s space (which there often isn’t), take a seat at the bar and start selecting delicacies to try. With a wineseller next door where you can pick up a bottle of vino tinto, Flan y Ajo offers an authentic Spanish dining experience.
Open In Google Maps
225A Westminster St, Providence, Rhode Island, 2903, USA
+14014326656
Give us feedback
Give us feedback