The Best Public Art In Philadelphia

The historic city of Philadelphia has changed a lot in the past 300 years, but there are always reasons for people to go visit the beautiful city, just one of which is the number of works of art that are available to the public. There are statues in every park and murals painted on the sides of many buildings, lending this city added color and vibrancy and making visitors feel welcome. Read ahead to see our picks for the best public art in Philadelphia. 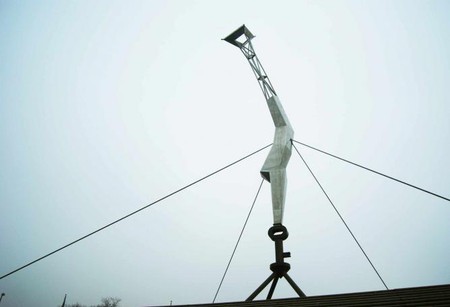 A Bolt of Lightning… A Memorial to Benjamin Franklin | Courtesy of the Association for Public Art. Photo by Caitlin Martin © 2013

Bolt of Lightning… A Memorial to Benjamin Franklin

The idea for this statue was conceived in 1933 by sculptor Isamu Noguchi, but it wasn’t until years later, in 1984, that it became a reality. The 101 foot stainless steel statue is made up of three main components: a key, a lightning bolt and a kite. Each of these represent Benjamin Franklin’s famed attempt to capture lightning using a simple key tied to the string of a kite during a thunderstorm. The location of the statue is fitting in itself, as it sits directly on the Philadelphia side of the Ben Franklin Bridge, to be seen by everyone entering the city. 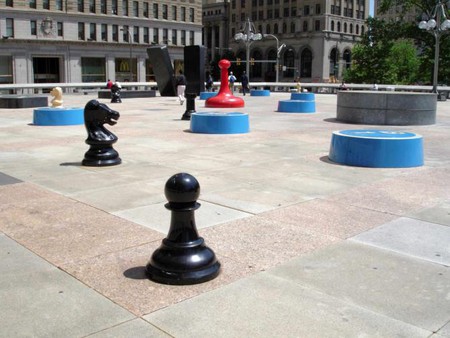 Your Move | Courtesy of the Association for Public Art. Photo by Gloria Lau © 2007

This work of art was created by three artists, Daniel Martinez, Renee Petropoulis and Roger White, in 1996. It consists of various game pieces from several well-known board games like dominoes, chess and parcheesi, made out of metal and fiberglass. The display is located outside of the Municipal Services Building in Center City, Philadelphia, and adds a bit of whimsy to a business-oriented area. 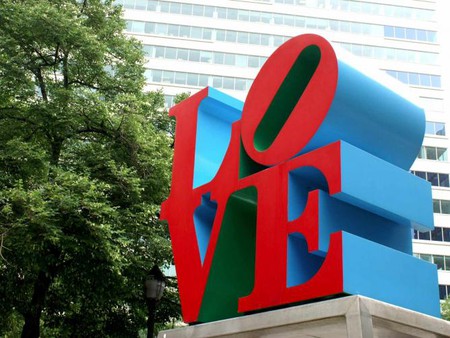 LOVE | Courtesy of the Association for Public Art. Photo by Caitlin Martin © 2010

Created for the bicentennial celebration of the United States in 1976 by Robert Indiana, this sculpture is 6 feet tall and made out of red, blue and green painted aluminum and stainless steel. The sculpture itself is the word ‘love’ with the letter ‘L’ and ‘O’ stacked on top of ‘V’ and ‘E.’ LOVE is located in John F. Kennedy Plaza, or as it is more affectionately known by the people of Philadelphia, Love Park. 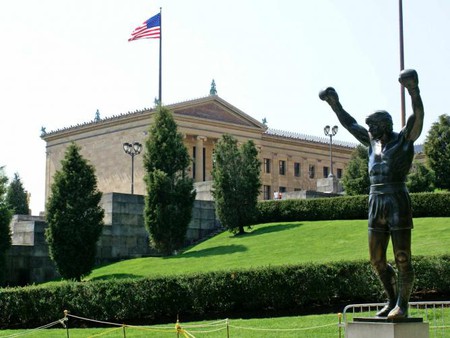 Rocky | Courtesy of the Association for Public Art. Photo by Caitlin Martin © 2010

This 8 foot 6 inch bronze statue of Sylvester Stallone’s Rocky was created by A. Thomas Schomberg for the film Rocky III in 1982. Since then it has been moved to the bottom of the steps at the Philadelphia Art Museum, specifically, at the famous spot where the fictional Rocky climbed the stairs at the end of his training, his arms stretched above him in victory. This is a popular spot for locals and visitors who like to race each other on the steps and then get a photo with the statue afterward. 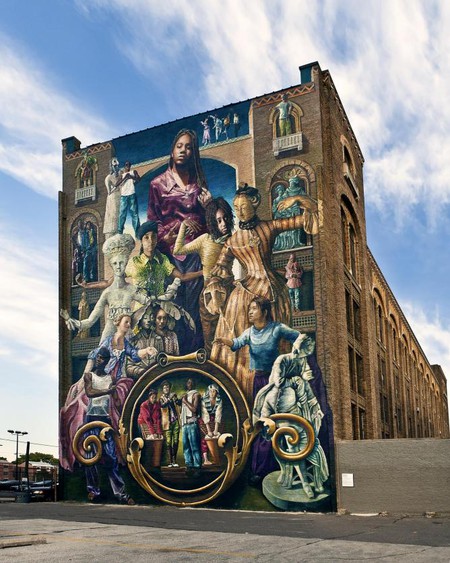 This beautiful and intricate mural is located at the corner of Broad and Spring Garden St. and stands eight stories tall. It was painted in 1997 by artist, Meg Saligman, and features people and figurines in both modern and period dress. The mural represents that all people are linked together, through both culture and time.