The Best Burgers In Philadelphia, Pennsylvania

Philadelphia, Pennsylvania is starting to become well-known for its cuisine, and in recent years it has improved greatly on its burger scene. Here’s our guide to the best burgers in the city. 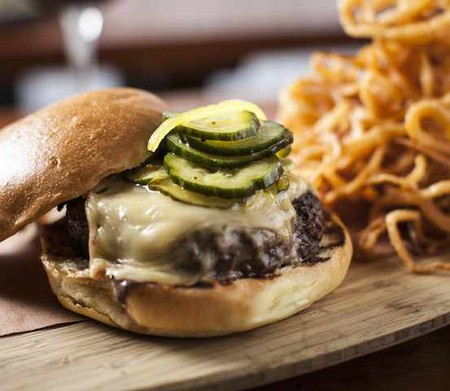 Fishtown’s Sketch Burger is a local favorite. The vast menu includes build-your-own as well as suggested options, and you can choose from an 8 oz. 100 percent ground beef, kobe, turkey or veggie patty. Luckily for vegans, they have choices not only from the patties, but from their house sauces and milkshakes. Gourmet favorites such as the Truffle burger comes with truffle butter, seasoning, mushrooms, fried egg, bacon and avocado. Cheese and additional burger toppings have an additional charge. The joint also serves Belgian-style fries. While you wait, you can sketch a picture of a burger as numerous others have to hang on the walls.

It’s a surprise Tria Taproom’s burger isn’t more well-known. The half-pound patty is perfectly tender and retains just enough juiciness to its lean texture. The beer pickles, Chimay cheese and “Beer-naise” sauce add elevated flavors that blend so well with the meat. The only burger option on the menu is really the only one you need. Served with thin, crispy fried onions, the burger is not only filling, but a gourmet revolution. Once you order the burger, choose from their excellent draft list to officially enter tastebud heaven.

Rated as one of America’s top burgers, the Rouge burger has made many lists of the best burgers in Philadelphia. The 12-ounce seasoned beef burger comes with Gruyere cheese and caramelized onions and a stack of pomme frites. Although a generally simple burger, it’s the quality of ingredients and meat-to-fat ration (only 15% fat) that make for such a good bite. The brioche bun is lightly buttered with super-fancy Plurga butter. The burger has becomes a piece of Philadelphia lore after being praised by GQ and having Oprah Winfrey stop by to give it a thumbs-up. 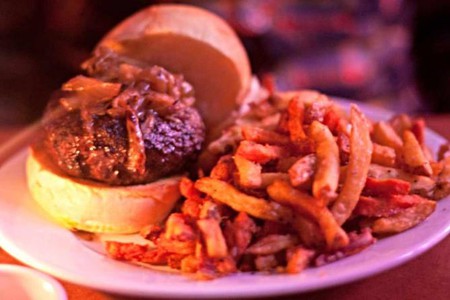 Good Dog’s signature burger is a must try. The half-pound sirloin favorite is stuffed with Roquefort cheese and piled with caramelized onions on a brioche bun. Coming with a heaping handful of seasoned sweet potato and potato fries with house aioli, the price is more than worth it. The burger is so juicy and comes with a nice hearty, earthy flavor that goes great with some whiskey or dark craft beers.

If you’re looking for a unusual burger, Sassafras Bar has all the burger options you could ask for. Diners may choose from bison, ostrich, lamb, veggie or classic sirloin. For an additional charge, you can make it ‘Gangster Style’. Order the Dillinger for caramelized onions and Gruyere or the Al Capone for for bleu cheese and bacon. The classy cocktails, antique bar and romantic Victorian mosaic tiles make eating this burger have a more sophisticated feel, like you’re in an old French bistro.

The Whiskey King burger is probably one of the most delectably rich items you’ll ever try. Pricey, this burger comes with applewood bacon, bleu-cheese, maple bourbon glazed cippollini onions and foie gras on top. It’s best to order this burger medium-rare for the optimal flavor. Don’t forget a side of duck fat fries and an old fashioned to go with it.