The Best Beer Gardens In Philadelphia

Philadelphia has several local breweries with lots of different kinds of craft beers served on tap or bottled, and the best places to try them out is at one of the many hip beer gardens around the city. Here’s our list of our favorite beer gardens in Philadelphia. 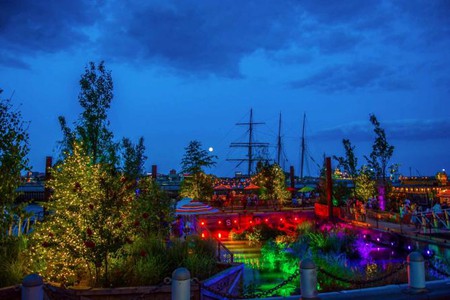 This scenic park is situated on the Delaware River Waterfront and is gorgeous at all times of the day. With over 50 colorful hammocks spread throughout the park as well as giant chess, bocce, and shuffleboard, this is a great place to hang out. Spruce Street Harbor Park also features a floating restaurant by local chef Jose Garces and a few food stalls of popular restaurants that provide beer and food to visitors. Hours vary.

Just steps from the Ben Franklin Bridge, Morgan’s Pier is located on the Delaware River and is a fun location to visit with friends. Guests can sit at one of the many picnic benches overlooking the river and harbor while partaking in food prepared by the season’s guest chef and sipping on craft beers. The drink menu features an extensive list of domestic beers and a simple list of wines. For food, the menu offers a wide range of American favorites, as well as several vegetarian and gluten-free options. 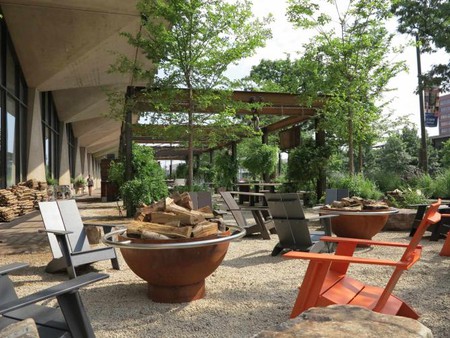 Built with reclaimed timber and distressed metals, Independence Beer Garden has an urban rustic aesthetic that grabs your attention right away. The bar overlooks both the Liberty Bell and Independence National Park, making it a fun hotspot for visitors to Historic Philadelphia as they make their way around the sites. There are 40 different regional and domestic craft beers to choose from, and games to play guaranteeing a good time.

A German centric beer garden and restaurant, Frankford Hall offers a wide variety of traditional food and beers. Guests have their choice of many German beers, such as Hofbräu Sommer or Köstritzer Schwarzbier, as well as several American favorites. They also offer beer cocktails and a small wine list. For those looking for a bite to eat, Frankford Hall has a menu of German classics, like pretzels, bratwurst and wiener schnitzel. 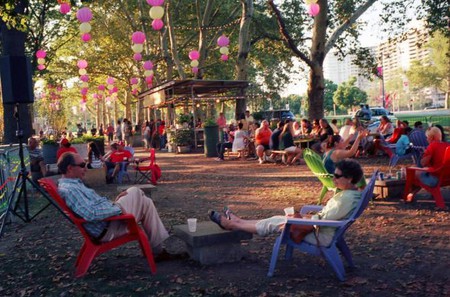 Situated on the Benjamin Franklin Parkway at the foot of the Rocky Steps to the Philadelphia Art Museum, The Oval is in one of Philadelphia’s liveliest locations. The vibrant park has a variety of interactive games like giant chess or checkers, as well as the occasional live musical performance or a movie night. In the evenings, food trucks line up, providing an assorted collection of food, and the beer garden opens, where visitors can enjoy a brew under the canopy of trees and in colorful lawn chairs.