The 10 Best Bars In Rittenhouse, Philadelphia

Rittenhouse is one of the most popular and refined neighborhoods in Center City, Philadelphia. Along with the great food the neighborhood offers, Rittenhouse’s bars have become nationally renowned for their creative and innovative cocktails as well as beautifully curated wine, beer and food pairings. Read ahead for our guide to Rittenhouse’s 10 best bars. 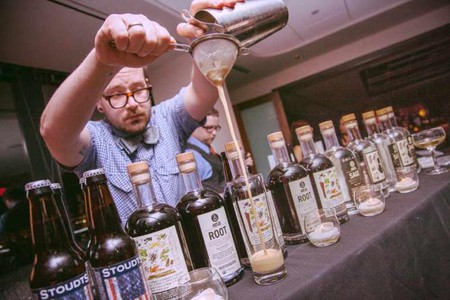 Bar, American
Facebook
Email
Twitter
Pinterest
Copy link
Share
Map View
Classy and sophisticated, Franklin Mortgage & Investment Co. – named after the local Prohibition era front for the largest alcohol ring in the US – is one of Philadelphia’s most popular Prohibition-style speakeasies. Narrow and dark inside with classic leather tufted banquettes and Carrara marble tables, customers will feel as if they’re stepping into the days of ‘Mad Men’. Their new menu has been cut down to one page of drinks, but customers who know what they’re looking for can still ask the bartenders for a specific concoction. The flavorful and creative cocktails are instilled with expert knowledge of the mixologists. Perfect for dates, happy hour or a nightcap, this bar is well worth a visit.
Open In Google Maps
112 South 18th Street, Center City West, Philadelphia, Pennsylvania, 19103, USA
Give us feedback

Good Dog Bar | ©Steve Legato
A convenient alternative to a proper cocktail bar, Good Dog is a lively gastro-pub with an array of craft beer options and a varied menu. The dark, three-story bar is decorated with monochrome pictures of all types of dogs. The draft list consists quality pale ales to porters and stouts (along with your cheaper more common drafts), the majority of them from American breweries. Pair these crafts with a burgers oozing with Roquefort cheese and heaps of seasoned sweet potato fries with a side of dipping mayonnaise, and you’ll be convinced that Good Dog is man or woman’s best friend.
Open In Google Maps
224 South 15th Street, Rittenhouse Square, Philadelphia, Pennsylvania, 19102, USA
+12159859600
Visit Website
Visit Facebook page
Give us feedback

Named one of the top wine and beer bars by Philadelphia Magazine, Food & Wine and Bon Appétit magazine, Tria Taproom has won numerous local awards for its service and selection. The twenty-five beer line-up is updated live online. Menu touchscreen tablets are provided in order for customers to read up on the beers and wines. For snacks, try the fish tacos and flatbreads. Tria Taproom has the sophistication and clean design of somewhere you’d assume might be elitist or stuffy, but this place is casual and the staff is friendly and helpful.
Address & phone number: 2005 Walnut St Philadelphia, PA 19103 215-557-8277

The art of mixology and craft cocktails has become better known in the last decade, and Ranstead Room has its fair share of specialty cocktails. Located just behind Stephen Starr’s casual Mexican restaurant El Rey, this small and dark cocktail bar has a sexy atmosphere; the red walls and black leather booths are perfect for a date night. Appetizers can also be ordered from El Rey’s menu or some plates like a charcuterie board from Ranstead itself. All cocktails at the speakeasy are priced the same, but if confused with what to order, ask for the ‘Bartender’s Choice’ option as they will curate a well-crafted cocktail to your liking.
Address & phone number: 2013 Ranstead St Philadelphia, PA 19103 215-563-3330 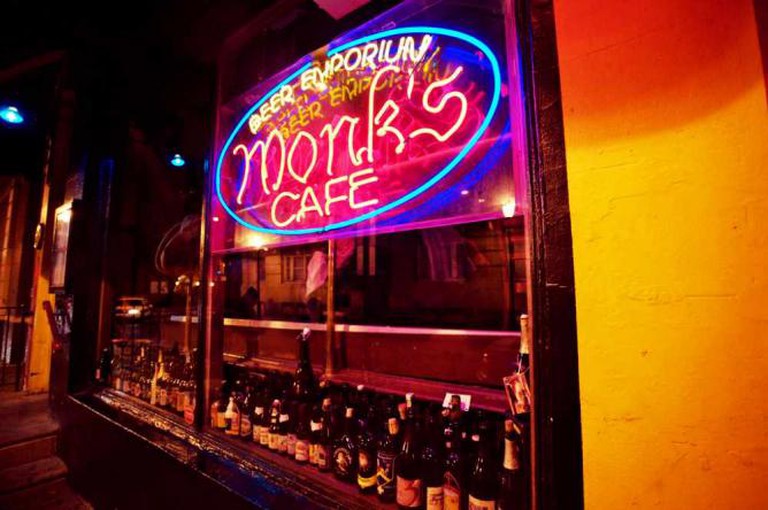 Oscar’s Tavern, Philadelphia | ©Buzz Andersen/Flickr
Oscar’s is a staple Center City dive bar that attracts all types of people from young professionals to college students. With decor that seemingly hasn’t changed for 30 years, Oscar’s is the type of place where you come with comrades to relax and indulge in cheap beer and food.
Open In Google Maps
1524 Sansom Street, Center City West, Philadelphia, Pennsylvania, 19102, USA
+12159729938
Visit Website
Give us feedback

Bar, Restaurant, Beer, Belgian, European, American, $$$
Facebook
Email
Twitter
Pinterest
Copy link
Share
Map View
Monk’s is a beer lover’s heaven – it has a massive beer bible with over 20 drafts and 300-plus bottles from around the globe. With a national reputation as a European beer pioneer, they are known for helping introduce American audiences to understanding the art of Belgian brews. The best place to curl up in the restaurant and bar is the back room, which boasts cathedral mirrors and medieval-looking tapestries. They also have a full menu with light fare and classic Belgian-style mussels and pommes frites.
Open In Google Maps
264 South 16th Street, Rittenhouse Square, Philadelphia, Pennsylvania, 19102, USA
+12155457005
Visit Website
Give us feedback

This bar has the atmosphere of a an old antique shop or an old library, with big worn out couches perfect for cozying up to your partner or friends for a warm, fun evening. Recognized as one of the top 24 speakeasies and cocktail lounges in the country by Food & Wine Magazine, this bar’s menu has a great mix of classic cocktails and contemporary concoctions. The kitchen’s grilled cheese menu is of note, but the highlights here are the drinks, service and atmosphere, where customers can learn a thing or two from the knowledgeable bartenders.
Address & phone number: 2006 Chestnut St Philadelphia, PA 19103 215-665-0456 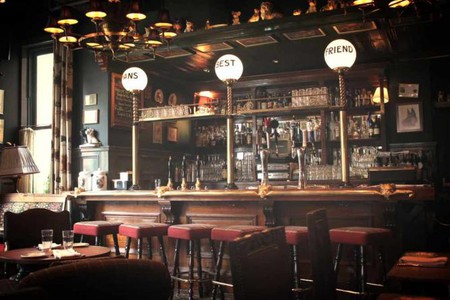 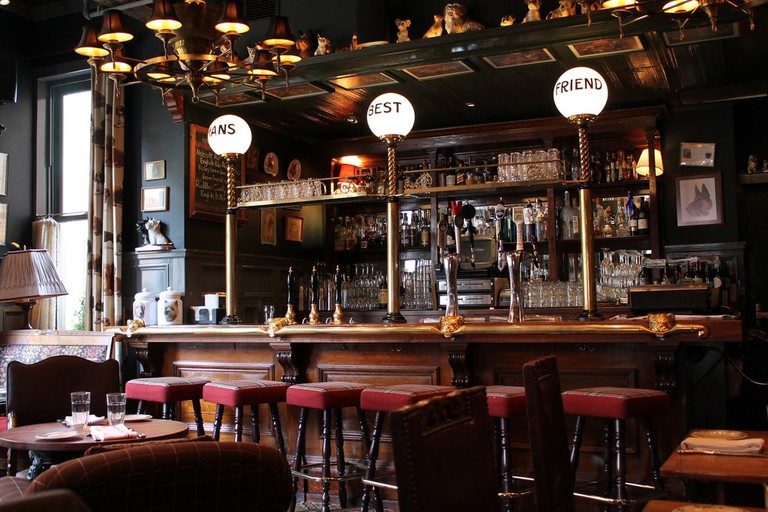 A British-style bar. | ©Tom Ipri / Flickr
Stephen Starr’s The Dandelion is a British-inspired restaurant and gastropub with more than enough beer options and British cocktail specialties. Taking a glance at their menu, customers will peruse the mix of British, American and a few Belgian beers. Also, available in half and imperial pints are cask beers, a nod to the British tradition of casks being stored in the cellars of England’s public houses for centuries. In fact, The Dandelion was the first restaurant in the US to earn a certification to serve cask beers, and these casks usually rotate more than once a week. Cocktails such as the London Fog (Bluecoat Gin, Earl Grey Tea Syrup, egg white and lemon juice) and Pimm’s Deluxe will give you the perfect buzz.
Open In Google Maps
18th Street, Philadelphia , Pennsylvania, USA
+12155582500
Visit Website
Visit Facebook page
Give us feedback 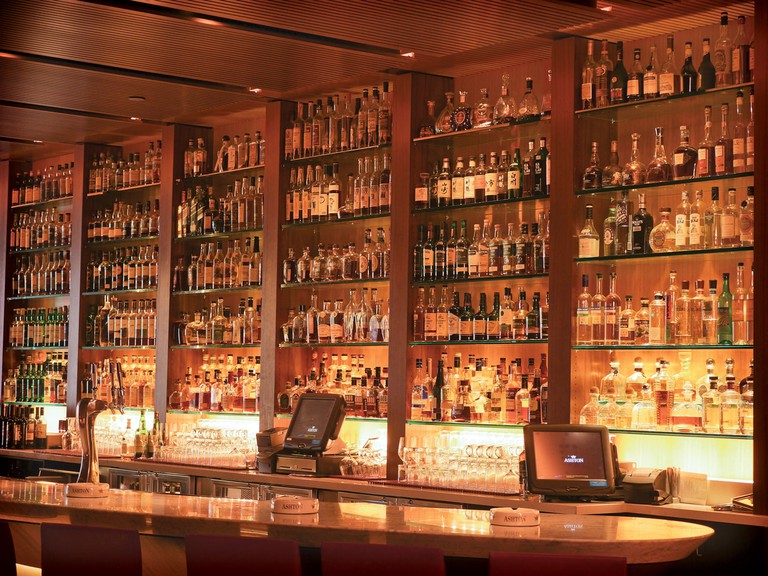 A Philly bar where you can smoke cigars | © Ashton Cigar Bar
Located above Holt’s Cigar Company, the second-story Ashton Cigar Bar boasts an extensive list of 330 whiskeys and over 100 bourbons and ryes, along with the single-malt scotches and international and blended whiskey drinks. Cocktails use fresh, local ingredients, and it’s also the only bar in Philadelphia that is legally allowed to host cigar smoking, so most of the drinks are paired with smoky tastes and environments. Intact with air purifiers, this bar won’t leave anyone irritated if they don’t like the smoke. The knowledgable staff here will help you with a selection of over 200 cigars to perfectly pair with your drink. The attire here is upscale and business casual. This sleek and modern bar will be sure to impress visitors as well as locals who are looking for finer tastes.
Open In Google Maps
Walnut Street, Philadelphia, Pennsylvania, 19121, USA
+2678003210
Give us feedback

Philadelphia’s Jose Garces saloon-style bar and restaurant is sure to have an outstanding hard-liquor fix. It carries over 175 choices for bourbon, rye, and Scotch as well as Irish and blended whiskies. They also carry a Laphroaig 25-year single-malt Scotch, and a blend of Woodford Reserve bourbon that was specifically selected for the bar. For those who don’t know what they like, ask one of the expert bartenders for their opinion.
Address & phone number: 118 S 20th St Philadelphia, PA 19103 215-655-1088