The Citywide Special is native to Philadelphia, consisting of a shot and a beer. First created at Bob & Barbara’s Lounge on South Street in 1994, the concept has since spread from many different dive bars in the city, each with its own spin on the special. Read ahead for our guide to the best of the Citywide deals in town. 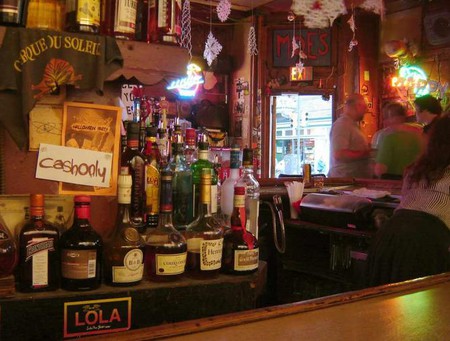 In 1994, band booker Rick Dobrowolsk suggested a special at Bob and Barbara’s with a can of PBR and a shot of Jim Beam for only $3. Today, they still keep it old school with PBR and Jim Beam for the same price. The bar itself has a nice divey, neighborhood feel, with plenty of PBR memorabilia decorating the wood walls. Every Friday and Saturday night, you’ll find The Crowd Pleasers playing some great jazz songs with patrons dancing around in the open floor space. On Thursdays, catch one of the drag performances.

This Old Irish style pub has its own take on the Citywide special, calling it the “Classy Special” and serving up a shot of Jameson and Narragansett for only $5. Monday is good if you want to show off your skills at open-mic night, and if you’re feeling up to the challenge, their tough Quizzo is hosted on Tuesday and Thursdays evenings at 8pm. Be sure to take a look at their schedule, because they often feature a variety of musicians during happy hour. Also try their fantastic fried pickles.

Instead of PBR in their Citywide Special, Doobie’s serves Sly Fox Phoenix Pale Ale with a shot of Heaven Hill bourbon for $5 all day long. It also has a variety of Citywide specials whom they have proudly named after customers and the inventor of the special, Rick Dobrowolsk. The small dive is a local favorite with frequent regulars. The bar has board games and a jukebox with rock classics, including lots of David Bowie classics. Doobie’s is cash only, but their ATM service charge goes to a local cat rescue.

The Dive serves PBR with cheap whiskey for their Citywide special that is $2.50 during happy hour. Happy hour runs from 5pm to 7pm and features $2 drafts and other weekly liquor specials and two free slices of pizza. The beer list is cheaply priced, while the shots here are generally served big. The bar is obviously a dive through and through, with cheap food like hot pockets, but the prices keep people coming back. There’s also a pool table upstairs.

The shot and beer special here is one of the cheaper ones you’ll find in the city. Patrons will get a Kamikaze shot with a seven-ounce beer of choice like Miller High Life or Pabst for only $3.50. The bar is recognized by their mural of different famous Franks outside, and be sure to check out their “Off the Wall” one wall gallery featuring the work of local painters, sculptors and photographers. No food is served here, but patrons are welcome to bring their own.