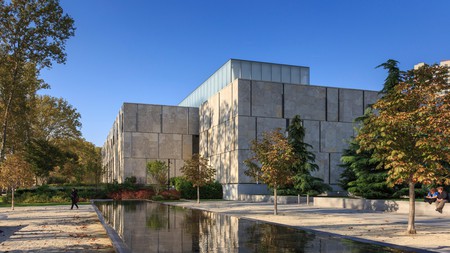 Ever since the Barnes Foundation moved to Philadelphia, it’s been more accessible than ever. But more than that, it’s a must-visit because its collection is unparalleled.

Running up the stairs to the Philadelphia Museum of Art was a time-honored tradition among art lovers of all ages even before Sylvester Stallone made it a popular homage to his Rocky franchise. But once the Barnes Foundation relocated from Merion to Philly proper, it became the city’s preeminent collection. Not only does the Barnes feature paintings by Picasso, Modigliani, Matisse, Seurat, Manet and Monet, it also has the world’s largest holdings of works by Renoir and Cézanne.

“We have 181 Renoirs and 69 Cézannes,” says Nancy Ireson, the Barnes Foundation chief curator. “That’s the most you’ll see anywhere. And so really, you have a depth of understanding of those artists that you can’t get anywhere else.”

“The other thing that makes us unique is that alongside our model French works, you also see African works, you see antiquities, you see pieces from China,” says Ireson. “Really, it’s a wonderful mixture of artwork from different times and periods and places. We even have old masterworks, so really, it’s that variety. The fact that you see all of these things side by side is really quite something exceptional.”

When Albert Barnes established the Barnes Foundation in 1922, it was due to his love for art and his desire to share that appreciation. Barnes, who was from one of the toughest areas of Philadelphia, excelled at school, and by the age of 20, he’d qualified as a medical doctor. However, Barnes decided not to practice medicine; he traveled to Germany instead, where he co-developed an antiseptic that made him a very wealthy man. With his fortune secured, he began collecting the best art of his era.

Barnes sent artist William Glackens, his friend, to Paris in 1912, and Glackens came back with pictures by Monet, Picasso and Van Gogh. After that, Barnes was hooked and eventually founded the foundation. His appreciation for art was so strong that he began to educate his factory workers about it.

“Even today, we have this wonderful sense of being a place where you don’t need to know about art to enjoy the museum. You come in, and it’s a really visual experience. You don’t see labels on the walls. What you do see are ensembles. Barnes created a way of putting [artworks] together, so you look at them in terms of how colors match up, how lines match up, how light and space connect. It’s a really beautiful, visual experience, and it’s very unique,” says Ireson.

She points out the highlights of the collection, which focuses on late-19th- and early-20th-century French works. There’s Van Gogh’s 1889 The Postman (Joseph-Étienne Rouli), which is “a wonderful picture of his friend who he lived nearby”; Matisse’s The Joy of Life, a painting that in 1906 ushered in the modern art movement with its shockingly vibrant colors; and important early works from Picasso, including the Acrobat and Young Harlequin, which straddles his Blue and Rose Periods.

Ireson’s personal favorite in the collection is Henri Rousseau’s The Past and the Present, or Philosophical Thought (1899). It features the artist standing with his second wife on their wedding day. Above, in the clouds, are the lovingly rendered portraits of their deceased partners.

Because of how the doctor set up his collection, the Barnes is a place where you can stumble across something new right next to one of your tried-and-true favorites.

“You come to see a Cézanne or a Van Gogh or a Seurat, and then you come away having discovered something completely unexpected,” says Ireson. “In one of the rooms where we have a fabulous Matisse, right in front of it, you see a little parrot made out of a lobster claw. It’s wonderfully eclectic. You see really great decorative arts, such as ceramics from the Pennsylvania area; you see works by De Chirico, the Italian artist. So, Barnes bought widely, and he bought quality.”