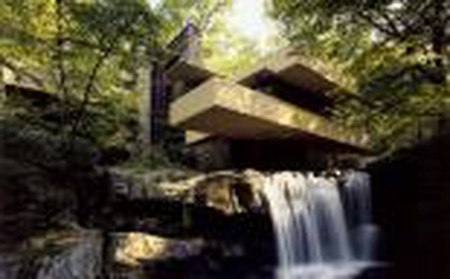 Frank Lloyd Wright’s architecture is quintessentially American. Not only is it nestled in its Pennsylvanian environment, it also reflects uniquely American cultural sensibilities. 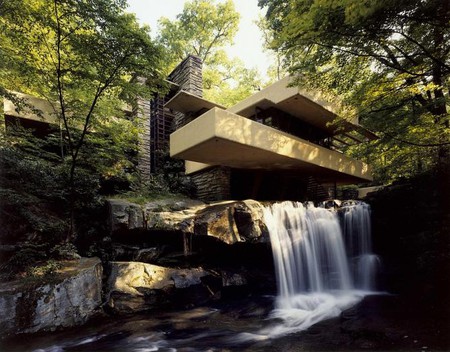 Frank Lloyd Wright is known for his unabashedly American architecture. His ‘Prairie’ style, exemplified in houses such as the 1909 Robie Residence, is humble to the point of unobtrusiveness yet remains intimately linked to its American roots.
Fallingwater is, without doubt, Wright’s most widely-known work. Nestled into the natural landscape of the Allegheny Mountains, its cantilevered floors mimic nature’s work; the rocky shelf from which the waterfall drops into Bear Run is multiplied and modified in reinforced concrete. The brazen horizontality of the camel-coloured form is offset by the vertical boulders which were assembled from around the site. From certain angles, the rigidly vertical walls appear as if they emerge organically from the rock bed above which the house stands. Thus integrated, the house looks as if it is a natural extension of the mountains.
Wright’s construction is notable for its daring use of experimental engineering works. Using reinforced concrete to create the cantilever design required a delicate balance of physical forces. Without sufficient steel support, the cantilevered beams would bend and sag. Whereas buildings such as Frank Gehry‘s Guggenheim in Bilbao, Spain or Fariborz Sahba‘s Lotus Temple in India impose upon their materials forcibly, causing steel to stretch and marble to bend under the architect’s will, Wright’s Fallingwater weaves its magic by creating an experience of apparent effortlessness and weightlessness.
By Stephanie Chang