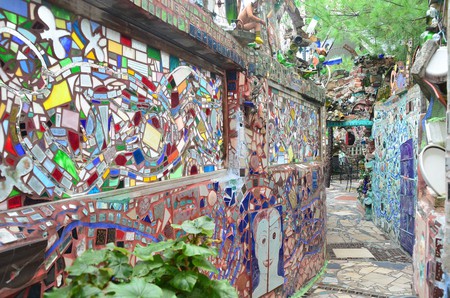 Philadelphia is home to plenty of incredible art, but many may not know about the mosaic wonderland in the heart of the City of Brotherly Love just waiting for visitors to explore it. Here’s a brief history of Philadelphia’s Magic Gardens—a mosaic installation and gallery.

Philadelphia’s Magic Gardens, located on South Street between 10th and 11th Streets, is a nonprofit art installation and gallery populated by mosaics, found pieces, and everything from kitchen objects to bicycle wheels that have been handcrafted into surreal works of art. The space is the largest one to date created by the artist behind it, whose name is Isaiah Zagar. 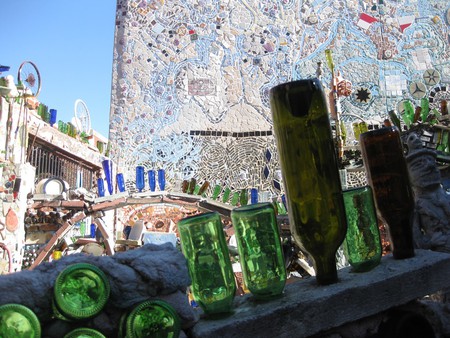 How the space came to be

Zagar and his wife, Julia, found a home on South Street during the end of the 1960s, when the city was considering razing the entire area to build highway expansions (specifically, to create a Crosstown Expressway that would conceivably link two other area highways, I-76 and I-95). Thanks to this proposition, the area was deserted, uninhabited, and, in fact, rather dangerous, but Zagar and his wife saw the value in it and opened a gallery at 402 South Street called the Eyes Gallery, their first project, which was also the first building that Zagar used to create his signature mosaic pieces and which also sold work primarily by Latin American artists.

Zagar bought the building that is now home to today’s Magic Gardens in 1994, among several other buildings that he used to create murals and public art. Once the vacant lots near the Magic Gardens became available, he purchased those as well. Zagar spent 14 whole years building the Magic Gardens, which are characterized by incredibly large murals made from sparkling shards of glass, everyday items like kitchen tiles and bicycle parts, shattered mirrors, and other found objects that can create art. In 2002, the space found itself in danger, as the owner of lots near the Magic Gardens wanted to sell. Luckily, the South Street community, who was rejuvenated by a massive upswing in the entire neighborhood, banded together and raised the money to purchase those as well so that Zagar’s work could continue uninterrupted. 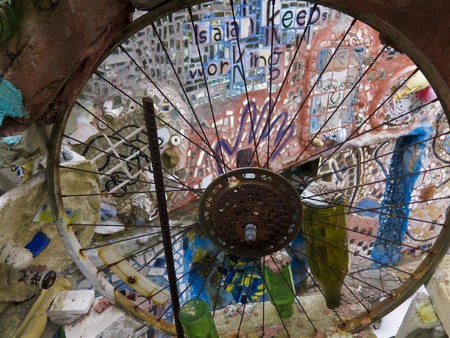 The Magic Gardens are, first and foremost, an enormous and interactive art installation, but it also functions as a gallery, which resides inside and hosts artists’ work from all over the world that is related to the gardens in some way, whether these works are mosaic, ceramics, or anything that can be considered “outsider art.” They also offer educational programming, host private events and performances, provide frequent tours, and, most importantly, mosaic workshops. If you visit the Magic Gardens and love them, be sure to check in on many of Zagar’s other works within Philadelphia, including murals in the South Street area and Old City’s Painted Bride Theater, but if you’re on a visit to the city, don’t miss this gorgeous world of mosaics, ceramics, and imaginative art.