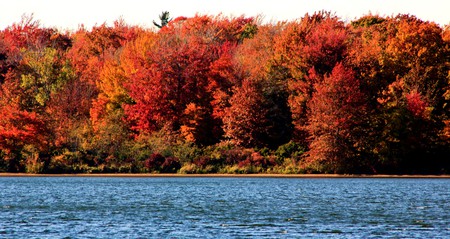 Located in the Northwest region of Pennsylvania, Erie is named after the Great Lake. With such close proximity to Buffalo, Cleveland and Pittsburgh, Erie attracts increasing numbers of tourists for its natural surroundings. Erie’s culinary scene has developed to accommodate the huge numbers of visitors circulating the area each year. We take a look at ten of Erie’s best cultural restaurants. 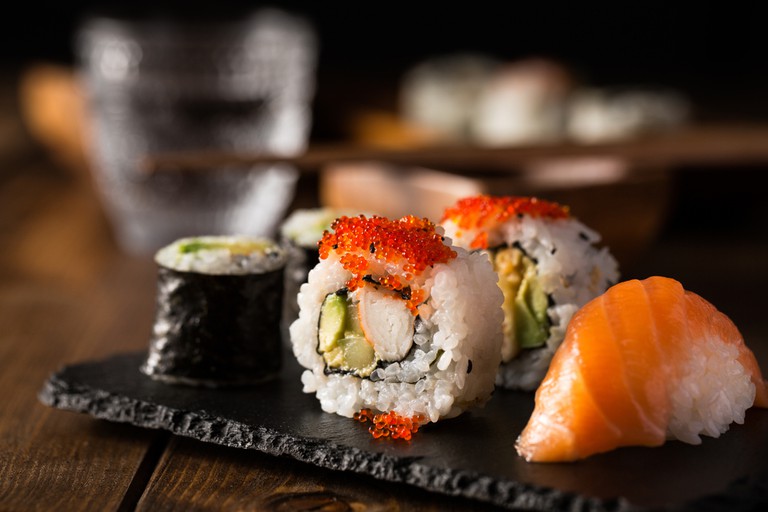 Sushi at | © funkyfrogstock / Shutterstock
Located in Downtown Erie, 1201 Kitchen expertly fuses contemporary Latin and Asian flavors to create a dynamic menu unique to the area. 1201 Kitchen enhances the culinary traditions of these two global regions with a twist of innovation that makes each visit an exciting experience. The restaurant’s menu changes with the seasons to ensure the freshest ingredients make their way to your plate from local farms and fishermen. The eatery offers a sushi bar and regular entrées from ramen and gyoza to artisan salsas, artfully pairing unexpected flavors like queso fresco with yuzu and mint. The restaurant’s décor is contemporary and urban with rustic wooden accents and warm red hues. In addition to a refreshingly modern atmosphere, 1201 Kitchen offers wine tastings each first Thursday of the month as well as cooking lessons and private parties.
Open In Google Maps
1201 State Street, Erie, Pennsylvania, 16501, USA
+18144648989
Visit Website
Give us feedback

Rave customer reviews and a long list of culinary accolades make Bertrand’s Bistro one of the most popular dining destinations in Erie. The eatery received the ‘Wine Spectator’s Award of Excellence’ five years in a row, whilst Chef Bertrand Artigues won first place in the ‘Preferred Erie’s Best Chef’ competition, as well as the ‘Pennsylvania Restaurateur of the Year’ award in 2012. Originally opened as a crêperie in 2001, Bertrand’s Bistro has since altered its concept and now offers dinner from Tuesday to Saturday and a delicious Sunday brunch. Amidst a welcoming and cosmopolitan atmosphere, guests enjoy the likes of butternut apple bisque and steak frites, topped off with an indulgent selection of fresh-made crêpes for dessert. Specializing in locally sourced, quality French fare, Bertrand’s Bistro is a true dining experience. 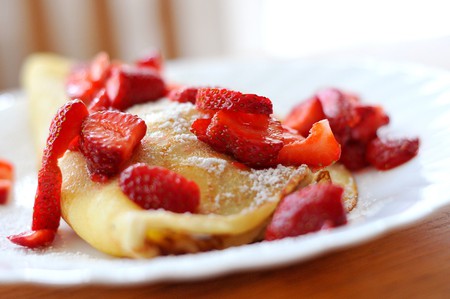 Located in the historic mid-19th century Union Station, The Brewerie specializes in craft beers and well-priced, hearty pub-style food. This unique restaurant offers multiple dining experiences throughout the Tap Room, Rotunda, private balcony and Trackside Beer Garden, and corresponding menus for a casual lunch or an intimate, refined dinner. The primary dining room is spacious with unusually high ceilings due to the nature of its special location, with a relaxed atmosphere and trendy decorative accents. The menus are extensive so there’s something for everyone, whether you’re looking for a full meal or some hors d’oeurves at the bar. The Brewerie also offers a choice of bottled and draft beers produced on site. For delicious, American-style food and authentic American atmosphere, The Brewerie is the perfect choice. 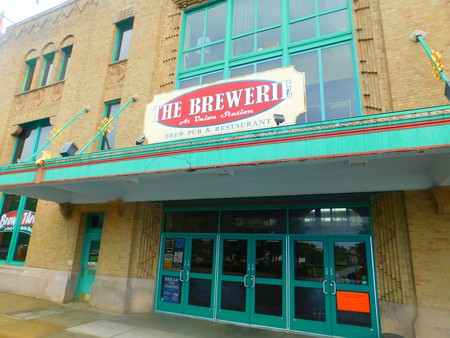 Jr’s on the Bay, The Sloppy Duck Saloon 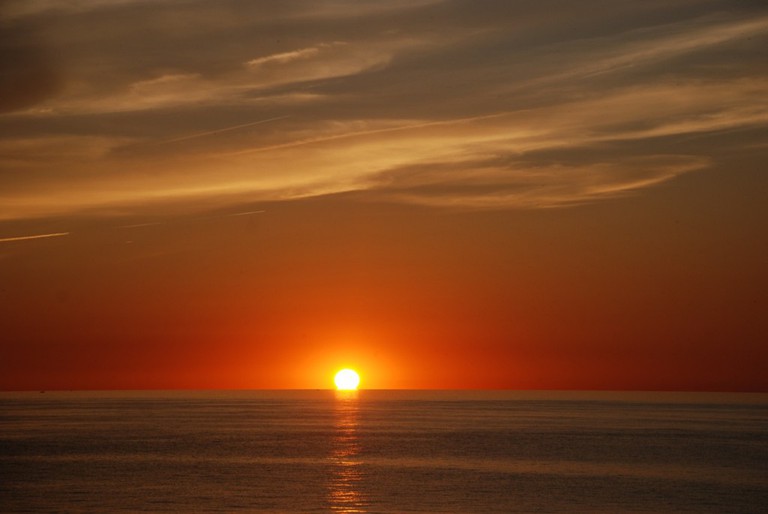 Lake Erie sunset | ©Jeffrey Avery/Flickr
The Sloppy Duck Saloon opened its waterfront doors in 2003. The restaurant features two decks overlooking Lake Erie, a principal dining area and a tiki bar, perfect for parties, date nights or relaxed meals. The Sloppy Duck is a great place to watch the sunset over Lake Erie and as the scenery changes throughout the year, the experience varies with the seasons. The restaurant offers a casual menu of appetizers such as nachos, wings and coconut shrimp, and meals include a selection of sandwiches, salads and American-style entrées from crab cakes and chicken bruschetta to grilled Ahi tuna. Live music and dancing on select evenings add to The Sloppy Duck’s fun, laid-back atmosphere.
Open In Google Maps
726 West Bayfront Parkway, Erie, Pennsylvania, 16507, USA
+18144526699
Visit Website
Give us feedback 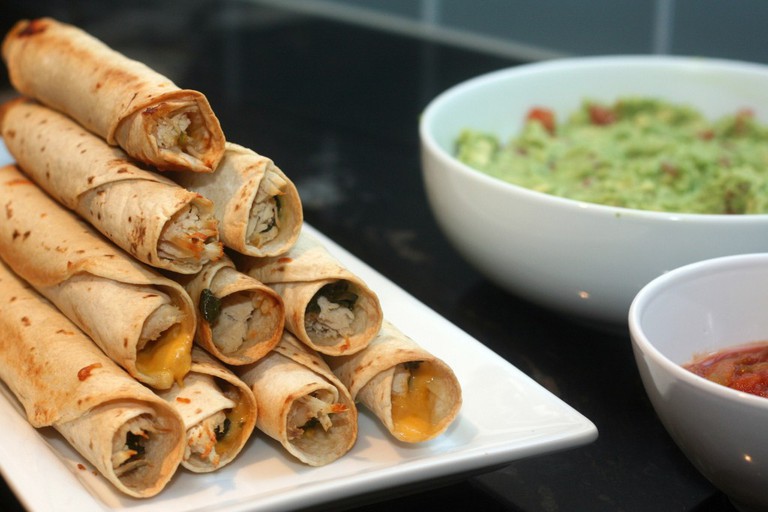 Baked Chicken and Spinach Flautas | ©kae71463/Flickr
It’s all about authentic Mexican cuisine, fresh ingredients and top-notch service at Latino’s Restaurant & Bar. Dine on the rich flavors of spicy pepper, cool guacamole and crisp salsa whilst listening to the rhythmic music of Latin America in a cozy yet cultural family-friendly atmosphere. Bringing the best of Mexican culture to the forefront of your dining experience, Latino’s offers traditional recipes passed down from generation to generation, using farm-fresh ingredients sourced from local markets. From enchiladas and flautas to ceviche and tamales, Latino’s aims to accommodate your every dining need, including a children’s menu and vegetable soup bases for vegetarians. The premier venue for truly delicious Mexican food in Erie, Latino’s Restaurant & Bar is a must-try for a relaxing meal out.
Open In Google Maps
1315 Parade Street, Erie, Pennsylvania, 16503, USA
+18144521966
Give us feedback 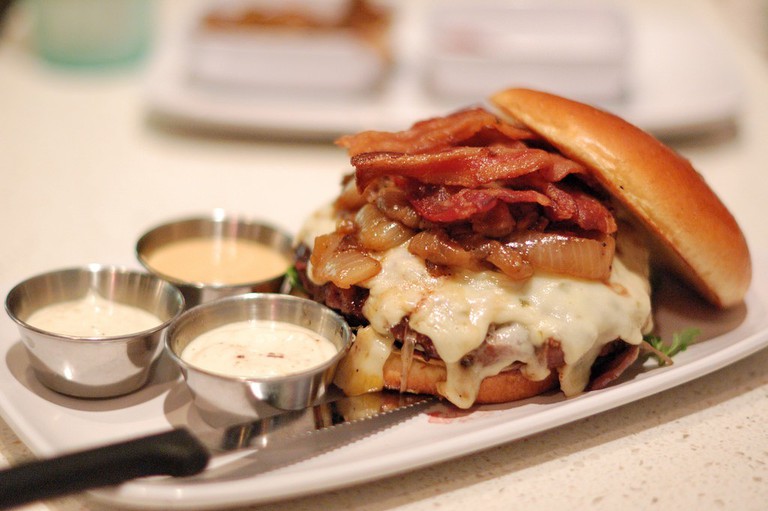 Cheesy bacon burger | © Michael Saechang/Flickr
A model of retro American style, Lawrence Park Dinor was built in 1948 by New Jersey-based Paterson Vehicle Company. The small pre-fabricated stainless steel and porcelain building was specifically designed for high productivity at a low cost, and bears a unique aesthetic that exudes Americana charm. The restaurant continues to receive glowing customer reviews for its excellent service and delicious food, and stands at the top of Trip Advisor’s list of restaurants in Erie. Offering a comprehensive menu of traditional diner food, guests can choose between an extensive selection of omelettes and hot cakes, hamburgers, sandwiches, soups and salads. Maintained in all its original glory, Lawrence Park Dinor (a spelling unique to the Western Pennsylvania region) remains Pennsylvania’s first individually listed diner to make the National Register of Historical Places.
Open In Google Maps
4019 Main Street, Erie, Pennsylvania, 16511, USA
+18148994390
Visit Website
Give us feedback 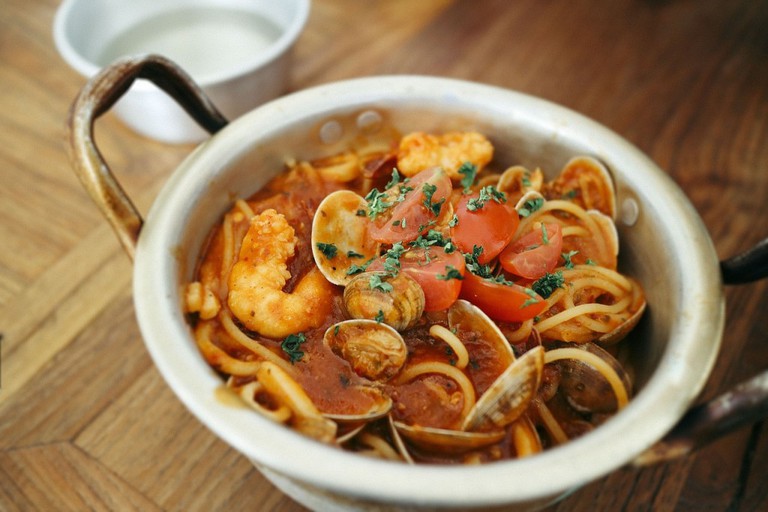 Seafood Pasta | ©Pixabay
With the coveted number one spot at the top of Trip Advisor’s list of restaurants in Erie, family owned and operated Mi Scuzi prides itself on bringing the best of the Mediterranean to Pennsylvania. After traveling throughout southern Italy in search of culinary inspiration, the owners of Mi Scuzi returned with an exceptional menu of traditional favorites from pastas and fresh salads to mussels, sausage and prosciutto. The restaurant presents a rustic feel with warm earthen tones and wooden ceiling beams, fostering a relaxing yet tasteful atmosphere that adds to your dining experience. With a comprehensive dinner menu alongside a long list of wines and beers to pair with your food, Mi Scuzi is an obvious choice for dinner in Erie.
Open In Google Maps
2641 Myrtle Street, Erie, Pennsylvania, 16508, USA
+18144544533
Visit Website
Give us feedback 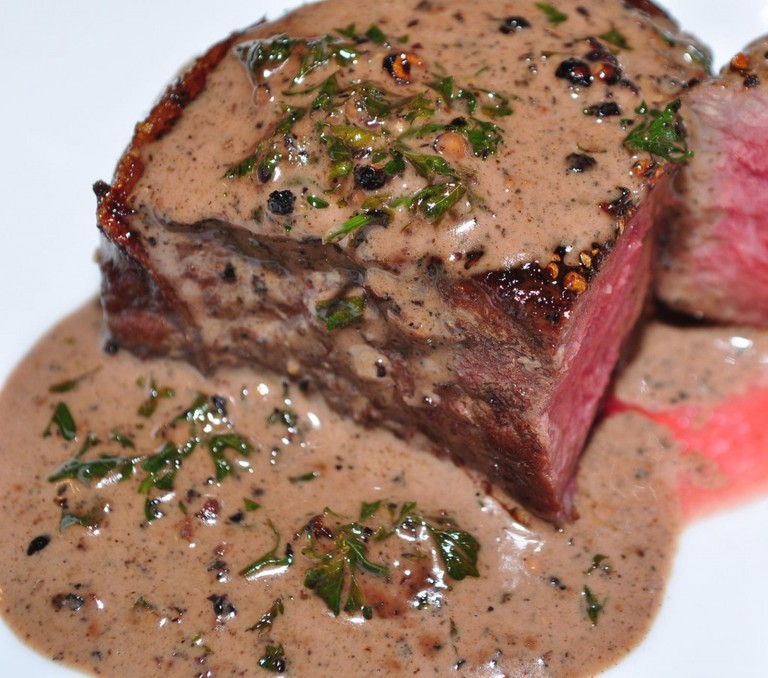 Filet mignon au poivre | ©jeffreyw/Flickr
Offering lunch, early bird and dinner menus, Ricardo’s specializes in a fusion of Italian and American cuisine with an emphasis on steaks, from filet mignon to New York strip steak. The restaurant opened in 1943 and continues to serve large portions of Italian specialities such as pasta with meatballs and chicken Parmesan. A selection of sandwiches, seafood and appetizers are also available and customers rave about the fried breaded zucchini starter. The restaurant’s décor is kept simple to foster a laid-back atmosphere and prices are reasonable, yet you’ll never leave hungry. Now a neighborhood mainstay, Ricardo’s is a popular choice for Erie residents looking for a hearty, traditional meal.
Open In Google Maps
2112 East Lake Road, Erie, Pennsylvania, 16511, USA
+18144554947
Visit Website
Give us feedback 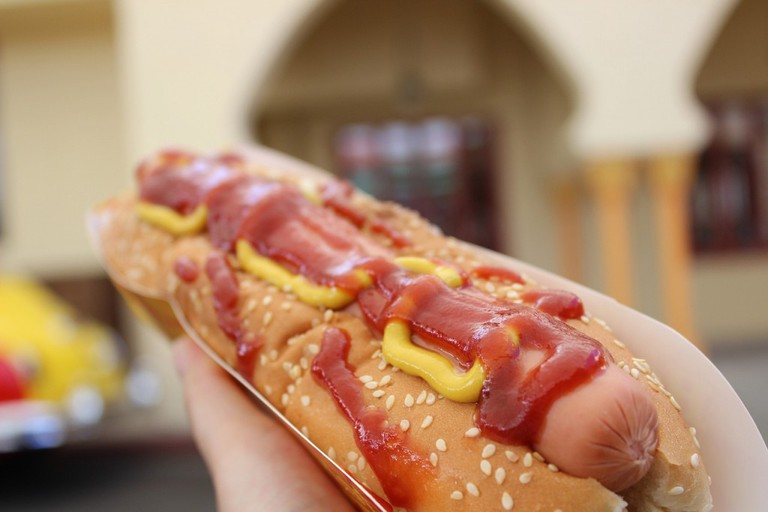 Hot Dog | ©Pixabay
Originally based in Erie, Smith’s Hot Dogs is a family owned and operated mainstay offering the best quality hot dogs and deli meats in the region and distributed around the country. The butcher shop has been around since 1949, but the Smith Provision Company was founded in 1927. Still serving the traditional recipes that made Smith’s Hot Dogs a local legend, the business remains strong in its fourth generation and has grown significantly as a retailer. While Smith’s delivers its signature products right to your door even out of state, the taste of a Smith’s Hot Dog remains synonymous with Erie, Pennsylvania.
Open In Google Maps
1300 Cranberry Street, Erie, Pennsylvania, 16501, USA
+18144594974
Visit Website
Give us feedback

Named ‘The Best BBQ in Erie’ by Lake Erie’s Living Magazine, Three B Saloon specializes in traditional Southern cooking with sticky ribs, slow smoked brisket and pulled pork on offer. Meat is the star of the show at this eatery, with a selection of wedge salads featuring steak, grilled shrimp and chicken, sandwiches and starters including potato skins, mini corn dogs and chicken fingers. The restaurant’s décor is simple as it’s all about the food from preparation to table. Three B Saloon is a popular choice for both on and off-site event catering. For good old-fashioned barbeque made the traditional way, Three B Saloon is the best in Erie. 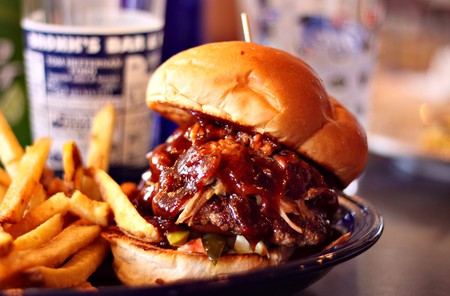