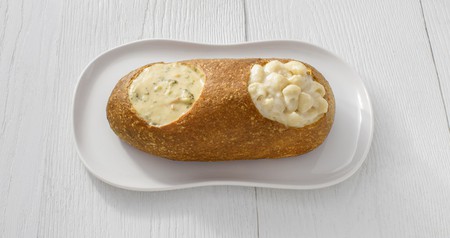 The fast-casual bakery-café will test out a new spin on its adored bread bowl: the double bread bowl.

Panera Bread, which has over 900 locations around the United States, is arguably best known for its beloved bread bowl. Normally this is a round of sourdough bread boasting a crispy crust and a soft interior. It’s hollowed out and the crater is filled with one of Panera’s many chilis, chowders, mac and cheeses or soups such as broccoli, cheddar and baked potato. But in this new iteration, one long loaf of sourdough has two scooped-out pockets – one on each end – each of which can be loaded with a filling. 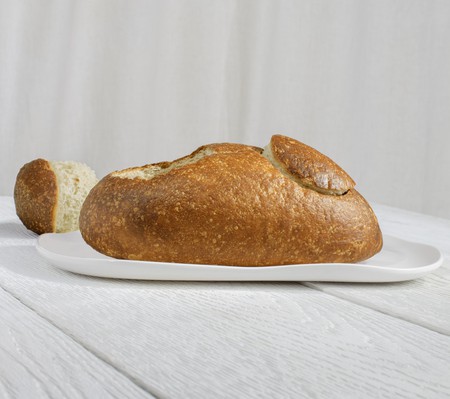 Instead of a round bowl, the double bread bowl is formed of one loaf of sourdough bread | © Panera Bread

Panera claims that the double bread bowl is “ideal for sharing with your BFF, significant other or even co-worker.” And it’s especially fitting for those who struggle to choose a filling for the normal bread bowl: now you’ll be able to feast on twice as many of Panera’s newly launched mac and cheeses (including a bacon version and one flush with avocado and pico de gallo), all at once.

But here’s the catch: for now, the double bread bowl will only be attainable in Philadelphia. Philly locals will be able to access the new item both in stores and through delivery. Ordering in person will be easy, but if you’re looking to submit a request online, all you have to do is log on to Panera’s delivery site: just include an order of one unsliced sourdough loaf, then make a note in the special instructions box to prepare the sourdough as a double bread bowl. Afterward, you’ll be prompted to select two soups or mac and cheeses.

The company will begin rolling out the dish between August 5 and August 31 in 32 locations in the Philadelphia area. If the dish is a roaring success, as the internet already seems to believe, the double bread bowl has the opportunity to become a permanent menu item throughout the country.