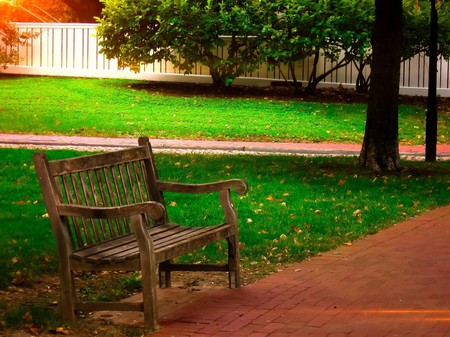 Philadelphia is one of the oldest cities in the country, and as such, the city’s structure and the planning behind it is an enormous part of its history. Here’s a brief overview of the parks and squares that shaped Philadelphia from its inception.

How the city was planned

William Penn, who founded both Philadelphia and the Commonwealth of Pennsylvania thanks to a grant from King Charles II of England, wanted to break away from the haphazardly planned towns and cities he had seen in England and decided to create a grid system, which would eventually serve as a blueprint for several other North American cities. The impetus behind Penn creating the city this way was to craft what he called a “green country town,” where the streets would be spacious enough to be free of the disease and overcrowding that were prominent on small European streets. To accomplish this, he planned the city around five public squares, four of which were placed in their own quadrants of the city and one of which was placed right in the center. 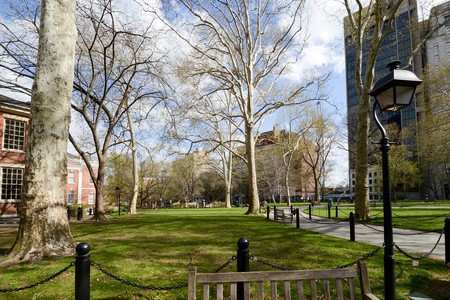 Though Penn’s original plan was to focus on the sprawl from East to West, Philadelphia naturally spread from north to south, leading to two squares in the southern parts of the city. Rittenhouse Square, which is located at the corner of 18th and Walnut, is the city’s southwest square and is now one of the most popular parks in the city, finding itself in the middle of one of Philadelphia’s most vibrant neighborhoods. Though it was originally aptly named Southwest Square, it was renamed after David Rittenhouse, who was the first director of the United States Mint and a well-known astronomer.

The southeast square, Washington Square Park (located at 6th and Walnut), is technically a part of Independence National Historic Park along with several nearby historic sites, including Independence Mall, the Liberty Bell, and others. Originally named Southeast Square, this space was originally used as grazing ground for cattle, but after that, it served as a burial ground for both soldiers who died in Revolutionary War and victims of the yellow fever outbreak of 1793. It’s also home to the Tomb of the Unknown Soldier, which contains reconsecrated remains of an unidentified Revolutionary War soldier who was found buried underneath the square.

Northwest Square, which is now known as Logan Square, was originally its own oasis, but changed drastically in the early 20th century thanks to the construction of the Benjamin Franklin Parkway. Logan Square sits in the middle of this enormous thoroughfare, which is bookended by City Hall and the Philadelphia Museum of Art and was modeled after the Champs Elysees in Paris. Though modern-day Logan Square is home to Swann Fountain, which is one of the city’s most beautiful sculptures and fountains, it was once both a burial ground and a square where the city’s public executions were held. 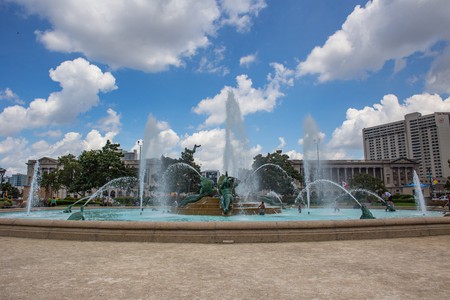 Meanwhile, the original Northeast Square, Franklin Square, is, of course, named after Ben Franklin, and is likely where Franklin conducted his kite and key experiment that led to his studies on lightning and electricity. Though it was part of an extremely popular Philadelphia neighborhood, Old City, for many years, highway construction left this fourth square desolate until the 21st century, when it was revitalized with a park, a mini-golf course, a carousel, and a burger stand.

The central square of William Penn’s city plan was, of course, City Hall, the only square that is no longer entirely functioning as a public park. Constructed in a style that adopts aspects from both medieval palaces and French architecture, the top of the building is adorned with a sculpture of William Penn himself, looking out at his own creation. Until Liberty One Tower was built in 1985, no other structure in the city rose above this statue of William Penn, out of pure courtesy. Though the building is, of course, a municipal structure, it does have a park attached to it — Dilworth Plaza operates year round, with markets, skating rinks during the winter, fountains during the summer, and more.