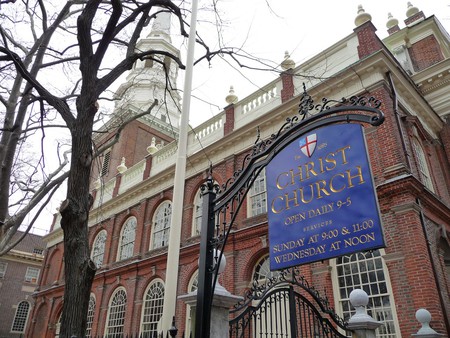 Philadelphia’s Old City neighborhood is home to plenty of historic structures, but one of the most significant is Christ Church, which is where famous figures such as George Washington and Benjamin Franklin prayed during their time in the city. Here’s a brief history of Philadelphia’s Christ Church.

The founding & construction of the church

In 1695, several erstwhile members of the Church of England helped found Christ Church, which was initially a modest wooden structure on the site where today’s elegant church now resides. What we see today was built between 1727 and 1744, and the steeple, which was added to the church in 1754, made the church the tallest building at the time in the entirety of North America. To this day, it remains one of the country’s most important and beautiful 18th-century structures, and it is also a perfect example of Georgian architecture.

The exact architect of the church is still unknown, but many believe that John Kearsley, a doctor who oversaw most of the construction, was responsible and was helped by John Harrison. In 1777, Robert Smith rebuilt the church, and in 1883, Thomas U. Walter renovated the interior.

One of the most notable features of the entire church is William Penn’s baptismal font, which is still in use today, but during the church’s heyday, many prominent Philadelphians and Americans prayed here. Fifteen signers of the Declaration of Independence prayed at the church, including Revolutionary War leaders like George Washington, Robert Morris, Benjamin Franklin, Betsy Ross, and more. The Reverend William White, who was the rector of Christ Church during the Revolutionary War, was also the Chaplain to the Continental Congress and the United States Senate. To this day, brass plaques are placed where each of these important people once prayed. 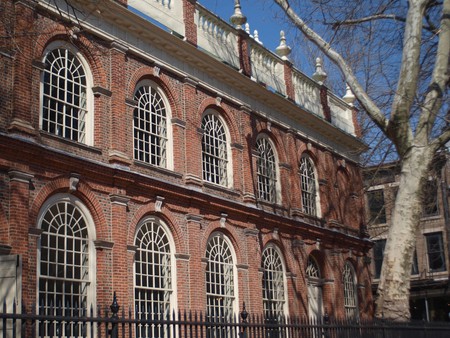 The evolution of the church

In the fall of 1785, several states sent deputies to meet at Christ Church and elect a leader, and Reverend White was eventually chosen to propose that Christ Church become an Episcopal church in the United States, with the approval of the Church of England. After an arduous process, which involved creating a new liturgy that led to the first American Book of Common Prayer, White submitted these two documents to the Church of England, and once he became the first-ever bishop of the Diocese of Pennsylvania, he sailed to England to argue the case for this church. Upon his return, the first meeting of the House of Bishops took place at the church, and it officially became the first real General Convention of the Episcopal Church in the United States. 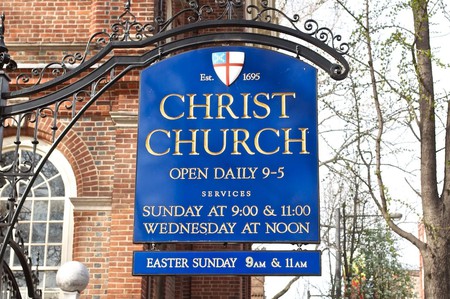 This structure serves as a unique combination of a historical site and an active church—it still fully functions as an Episcopal church—and it is also the final resting place of a few notable Americans. Reverend White is buried in the church’s cemetery, as are Charles Lee (a general in the Revolutionary War) and Robert Morris (a signer of the Declaration of Independence). Benjamin Franklin and several other signers of the Declaration are buried at a nearby cemetery that bears Christ Church’s name. All in all, this historic church attracts over 250,000 visitors each year and stands as a remnant of Philadelphia’s religious roots.