Why is Portland Called "Rip City?" 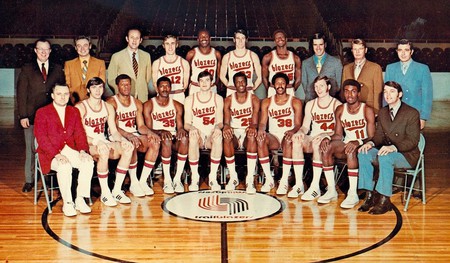 For years, Portland was dubbed “Rip City.” Here’s the story behind the nickname.

The date is February 18, 1971. The Portland Trail Blazers are playing their rivals, the Los Angeles Lakers, and they’re losing. Bad.

After being down by more than 20 points, the Blazers found themselves with a chance to tie the game. Shooting guard Jim Barnett got the ball and took an ill-advised shot from nearly half-court (and this was before the three-point shot existed). Somehow, the ball found the bottom of the net. Barnett tied the game.

The crowd burst into cheer, and the team’s play-by-play announcer, Bill Schonely, spewed a nonsensical phrase. “RIP CITY, ALRIGHT!” he yelled. The legendary announcer is the first to admit he has no idea where the words came from, nor did he have any idea his stream of consciousness word vomit would catch fire and change Portland culture forever.

1970-71 was the Trail Blazers’ inaugural season, and though the team’s record was nothing to brag about (they ended up dead last in the Pacific Division, winning only 29 games and losing 53), their mere existence lit a spark in the Rose City that’s only grown brighter in the nearly 50 years that have followed.

Before Portland welcomed the Timbers, and Major League Soccer, to the city in 2009, the Blazers were its only major league team. You weren’t considered a true Portlander unless you were a Blazers fan, and the diehard nature of the fanbase was recognized throughout the league, no matter how good or bad the team was that season.

In 1977, the Trail Blazers won their first and only NBA title, but if you ever visit the city you’d think otherwise. Portland’s pride for its basketball team is palpable. Home games are constantly sold out; local breweries produce Blazers-inspired beers; there’s even a bar called Spirit of ’77. And right outside the Blazers’ home, the Moda Center, stands a statue of the words that started it all: Rip City (the second “I” is missing, so visitors can stand in its place).

As he always does, The Schonz explains his accidental phrase’s significance better than anyone in an interview with Sports Illustrated. “The meaning of ‘Rip City,’ first and foremost,” he says before taking a pause. “… Is it means something good, something positive.”