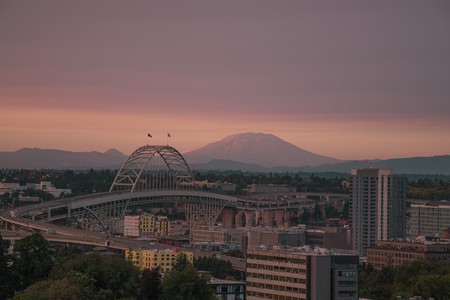 Portland's been keeping it weird since the 1800s | © Elena Kuchko / Unsplash

“Keep Portland weird” is an instruction that’s well known to anyone aware of this rainy, quirky city in Oregon. But what made it weird in the first place? There isn’t just one answer. From the weather to the donuts, we’ve collected some of the best reasons why Portland is unique, for those looking to understand the city a little better.

Portland’s regional rain and gloom aren’t special on their own (nearby Seattle is just as well known for being drenched for a large part of the year), but what Portlanders do despite the weather makes for a city of weather-resistant West Coasters. Portland’s fashion, architecture and outdoor activities are all dictated largely by the 154 rainy days the city sees on average in a year, and the drizzle rarely stops a Portlander’s plans. Loving the rain goes so far in Portland culture that it’s become a point of pride to never carry an umbrella — locals will brag that umbrellas are for tourists only.

A passion for getting tipsy

The city’s love of alcoholic beverages is best represented by the incredible number of craft breweries, distilleries and wineries in the Portland region. Many of the country’s top-rated brews come from Portland, and with a burgeoning distillery scene and the renowned Willamette Valley wine region to the south, the city is prouder of its tipsy offerings than many other cities, even those that are much larger in size. Having a drink is culturally common in the city; head to most events, sports games or movie theaters, and you’ll find beer and wine served with pleasure.

New York City may have the Brooklyn Bridge, and San Francisco the Golden Gate, but Portland values quantity and quality in its bridges over the Willamette River. With 12 total river crossings in Portland – eight of them pedestrian-friendly – the average commute is a scenic stroll over the river that divides the city. The bridges are important for all Portlanders, but cyclists especially find the bridges to be the city’s most valuable resource, as they’re the setting for the annual Providence Bridge Pedal event, in which riders can cross 11 of the 12 bridges in a massive, 37-mi (60km) community ride.

An investment in the arts

Portland’s reputation as an artistic haven is well founded, but some may not know that the city government has played a pivotal role in establishing that reputation. As artists found Portland to be an affordable and creative base throughout the second half of the 20th century, city officials collaborated with local artists to create impressive works, including the now-famous Portlandia statue stretched over buildings in downtown Portland. Today, city-funded efforts for street art and murals have turned many of Portland’s brick buildings into long-lasting works of art and are well worth slowing down for and catching if you’re visiting the city.

Only in Portland will locals argue about the important differences between glazed and jelly-filled donuts. While many first think of the over-the-top but delicious Voodoo Doughnuts when they think of Portland’s sweets scene, the city has a passion for these fried baked goods that goes beyond showmanship. The art of the donut is embedded in the city’s greater passion for food, as you can find an independent craft bakery in every neighborhood and can usually find donuts on the dessert menus of high-caliber restaurants across town. Whether they’re fancy or fast, approach these sweet treats with respect; most Portlanders will demand it.

Since the city’s founding in the 1800s, Portland has acted as one of the premier outdoorsy towns in America’s western states. The town has attracted woodsy types for generations, and as a result, the city has grown to treat nature as a priority. The most influential act to preserve the city’s nature was the urban growth boundary, set in 1973, which prevents Portland from becoming a sprawl and protects some of the finest forests and mountains in the Pacific Northwest. A prime example of how this makes Portland unique is that anyone with a car and an adventurous spirit can hit the snowy slopes of Mount Hood to the west in the morning, surf waves on the Oregon Coast to the east in the afternoon and be back in Portland for dinner.

Rapid growth (and a welcoming spirit)

Portland has seen a remarkable population increase in the past few decades, gaining an estimated 30,000 new residents every year since 2000 and becoming one of the country’s fastest-growing cities. Thanks to the friendly spirit of many of the city’s independent businesses and residents, the resounding mood as Portland experiences an influx of new residents has been welcoming. The truly impressive feat throughout this period of time has been in retaining the city’s small-town feel; and with a collective effort, Portland keeps itself weird while gaining new residents all the time.