The Best Hotels to Book Near the Portland Japanese Garden 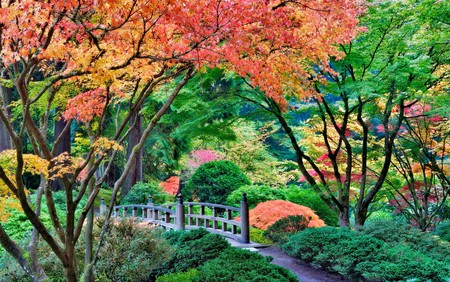 Choose a restful downtown hotel in Portland, Oregon, for your visit to the Portland Japanese Garden, one of many attractions, along with the Oregon Zoo and the Hoyt Arboretum, in Washington Park. Here’s our pick of the best – bookable on Culture Trip.

It’s no surprise that many Portland visitors plan a trip around this serene showcase of botanical bliss. You could hurry through and see it all in an hour or two, but having a hotel room nearby allows you to slow down and appreciate the many sensory delights of the garden. Parking can be difficult and expensive, so take a cab, hop on a bus or hike up to Washington Park from downtown. 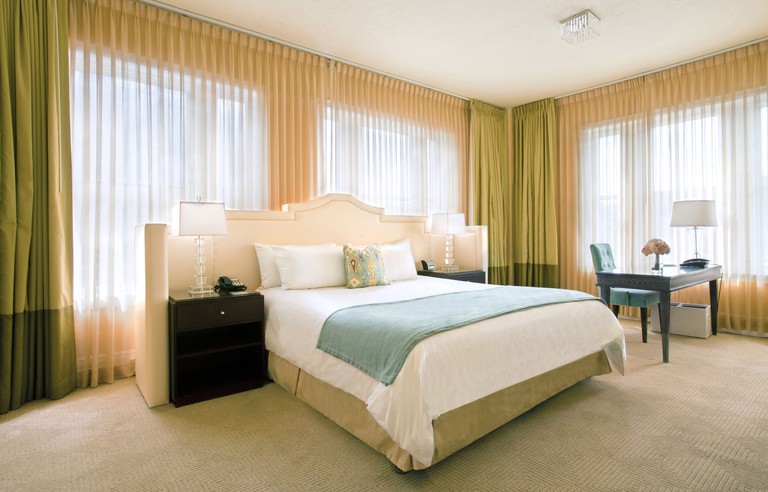 Courtesy of Hotel deLuxe / Expedia
This historic hotel pays tribute to the golden days of Hollywood, with its name a nod to deLuxe Labs, which brought color to the movies. Guest rooms in the former Hotel Mallory were built in the 1920s, so they are on the small side but warmly furnished in calming pastel tones. Gracie’s, the on-site restaurant, serves afternoon tea, and there’s fresh fruit in the lobby, too. 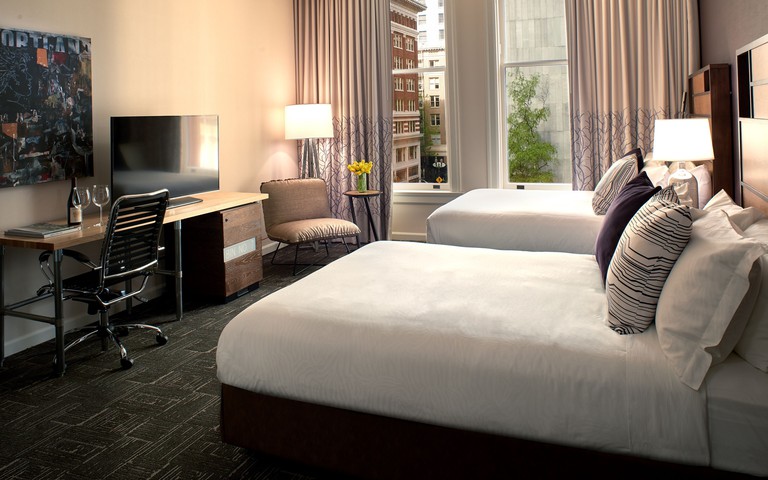 Courtesy of Kimpton Hotel Vintage Portland / Expedia
The Hotel Vintage vibe brings the outdoors inside, from the nightly tasting celebration of Oregon wineries to the Sky Loft rooms featuring solarium-style windows and cool cork-lined walls. Each of the rooms is unique. Loaner bicycles promote outdoor fun, and there’s an extensive game room with shuffleboard, billiards, video games and more to enjoy if the weather turns foul. 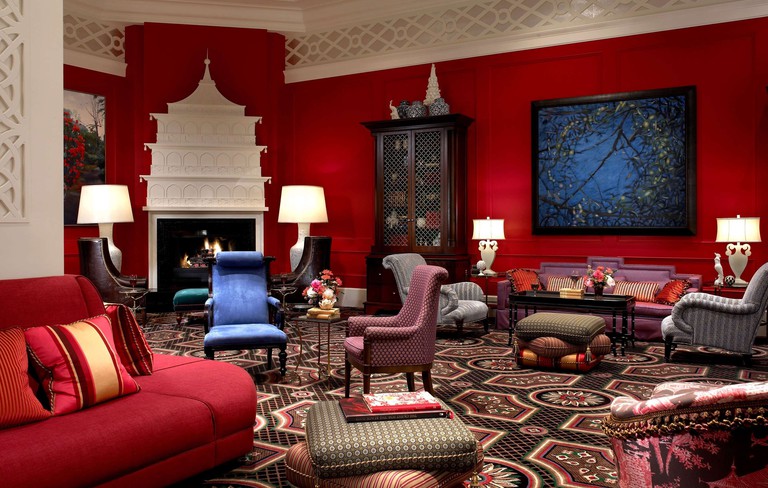 Courtesy of Royal Sonesta Portland / Expedia
Take the Portlandia cable series, add a dash of your favorite Wes Anderson film and you have the Royal Sonesta’s whimsical take on hospitality. Guest rooms feature bird-themed wallpaper and tufted headboards. Get a good night’s rest, grab a cup of organic coffee in the lobby, then catch a bus to the Portland Japanese Garden. Afterward, return for the social hour. 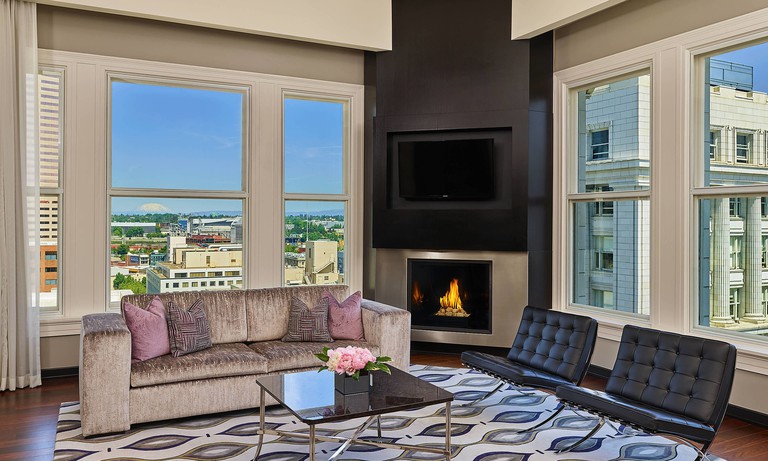 Courtesy of The Nines / Expedia

Relax in luxury at the Nines, a hotel fashioned from what was once the leading department store in Portland. The elegant high-ceilinged guest rooms feature greenery, window seats and sustainable toiletries from BeeKind. Inspiring restaurant choices include Departure, which serves Asian fare with a view on the 15th floor, and Urban Farmer, a plant-filled modern steakhouse in the atrium. The fitness center includes a Peloton bike and free weights. 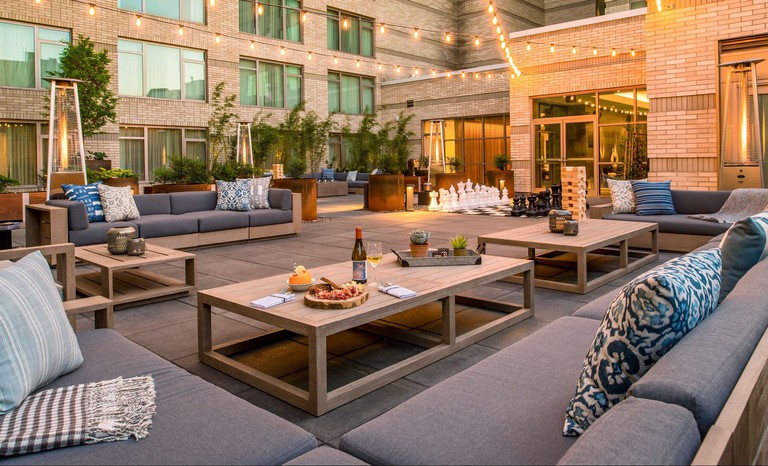 Courtesy of The Duniway Portland, a Hilton Hotel / Expedia

A long-time Hilton property and one of the biggest hotels in Portland, the Duniway is reimagined to honor Abigail Duniway, an early Portland rabble-rouser on behalf of women’s suffrage. It gets the small details right, such as colorful and comfy guest room furniture, Bluetooth radios and umbrellas to take out in the Oregon rain. Nearby Pioneer Square has good transit connections. 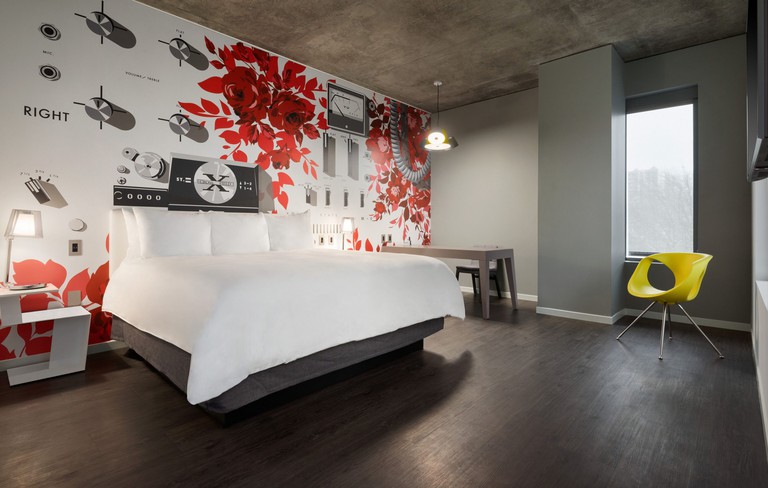 A counterpart to the calm you’ll experience at the Portland Japanese Garden, this former Radisson Red hotel has been rebranded into a high-energy retreat tucked into a downtown office tower. Guest rooms feature vibrant murals intended to inspire creativity, with large walk-in showers tiled with fun motifs that recall Portland’s beloved Benson Bubbler drinking fountains. There’s an on-site Starbucks and many restaurant choices nearby. 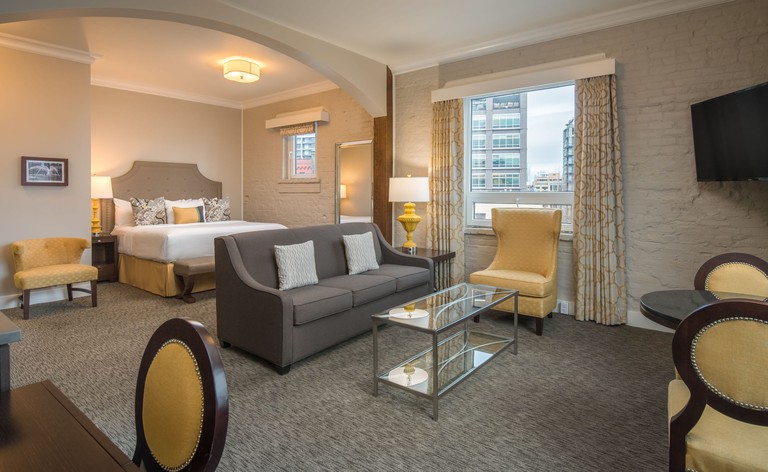 Long a favorite among creative visitors to Portland, the Mark Spencer is an older hotel with rooms to suit all budgets, most on the small side but with luxe touches such as marble floors in the spa-inspired bathrooms. The indie Powell’s Books is just a block away, and the Portland Japanese Garden is a quick trip on the bus. 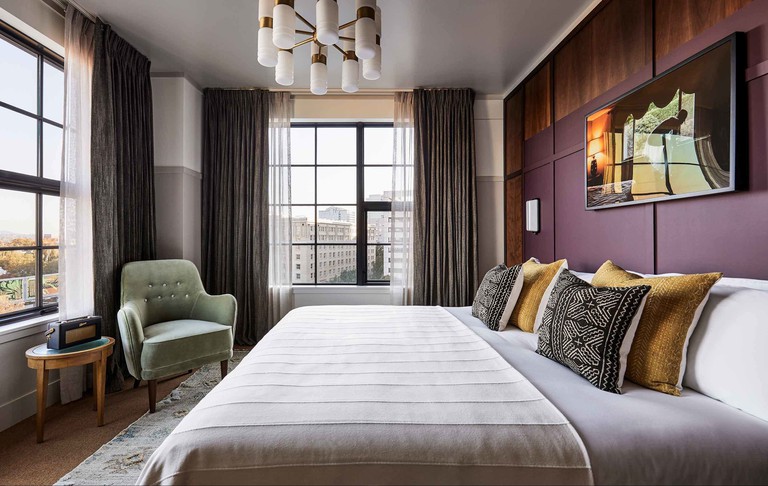 Courtesy of The Hoxton, Portland / Expedia

Extend your pan-Asian explorations with a stay at this British-accented hotel in the Old Town Chinatown district. It’s within walking distance of the Lan Su Chinese Garden, another beloved botanical oasis. The Hoxton’s array of rooms feature walnut paneling and pink marble accents, along with locally curated art and ceramics. Mix it up with locals at the rooftop restaurant or basement bar.

What makes Portland so distinctive is that there’s something for everyone. If you don’t want to break the bank, discover the best budget-friendly hotels in the city, or for those interested in sleeping somewhere more upmarket, see Portland’s range of boutique hotels, now bookable via Culture Trip. With a good night’s sleep secured, you’ll be able to explore all the things to do that make this city unique. Spend as little as 48 hours in Oregon’s largest city and feel like a local, making sure to end your day in one of the many bars that Portland is famed for.