The Best Hotels to Book Near Forest Park, Portland 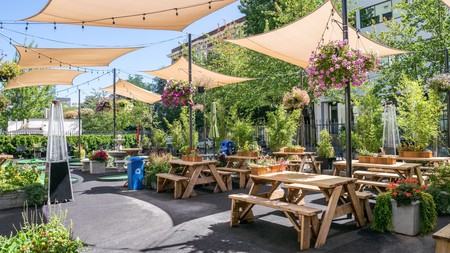 With a stay at Hotel deLuxe, you’ll be within striking distance of Forest Park | Courtesy of Hotel deLuxe / Expedia

Explore the trails and trees of Forest Park, one of the largest urban forests in the United States, then spend a restful night at a convenient hotel in Portland, Oregon. Here are the best places to stay – bookable on Culture Trip.

Designed by the Olmsted Brothers, whose father, Frederick Law Olmsted, created Central Park in New York City, Forest Park is one of the great urban parks in the United States. It’s densely wooded and laced with more than 80mi (129km) of hiking and cycling trails, making Portland the perfect destination for combining city fun with outdoor adventure. 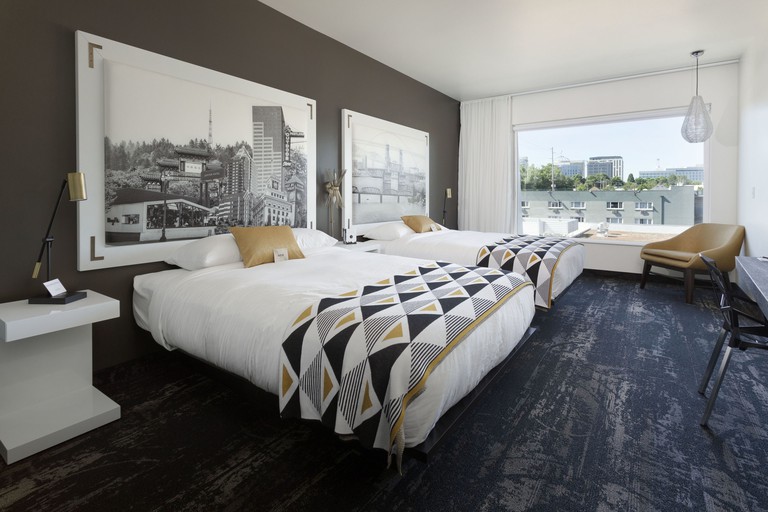 Courtesy of Jupiter Next / Expedia

After a day on the trails, Jupiter Next beckons with rooms infused with creations by local artisans – from muraled headboards to bold geometric blankets – and city views. Next is an expansion of the Jupiter Hotel, a hotspot with two restaurants and a top small music venue, the Doug Fir Lounge. The hotel is on the east side of Portland between the Lloyd District and the Buckman neighborhood. 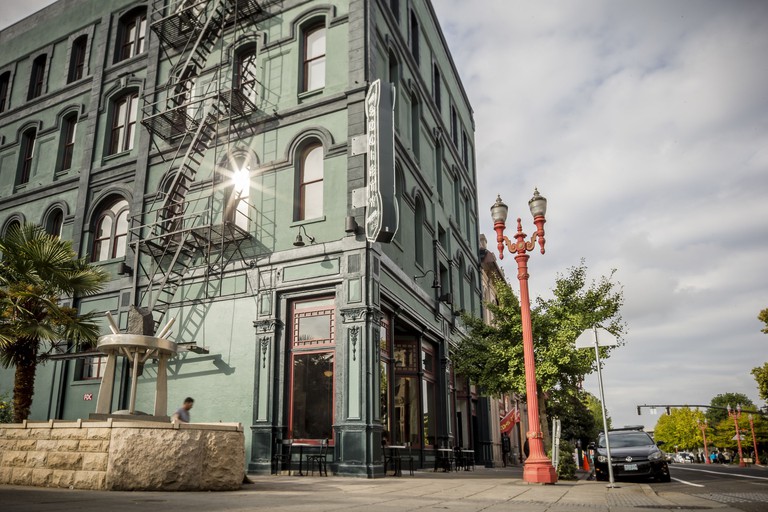 Courtesy of The Society Hotel / Expedia

If your great-grandpa caught his ship in Portland, he might have stayed at an earlier incarnation of the Society Hotel. Right in the thick of the Old Town Chinatown district, it has everything from hostel bunks (with privacy curtains) to ensuite rooms. The convivial lobby includes the Society Cafe – a cafe and bar – and the rooftop deck is another good gathering spot. 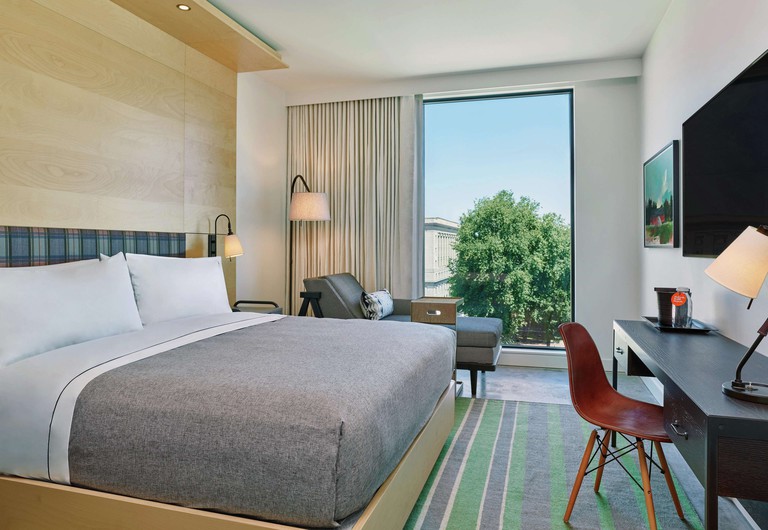 Before heading out for a day of urban hiking, you can start your day with a grab-and-go breakfast. Ecofriendly touches include water bottle filling stations on every floor. The hotel is a little closer to Forest Park than other downtown areas. And if you want added comfort, premium rooms come with snug robes and slipper socks.

The Benson, a Coast Hotel 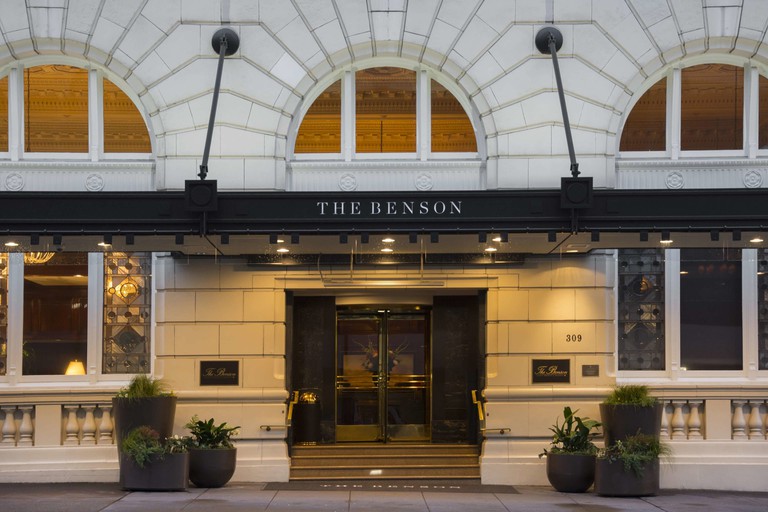 Courtesy of The Benson, a Coast Hotel / Expedia
The Benson is one of the classic old hotels in Portland, with lots of polished wood and a restaurant specializing in steak and after-dinner cigars – maybe not the first choice of health-conscious hikers, but your mileage may vary. Pad your daily step total with a trip down the historic marble stairwell; it’s 12 floors of photos, stories and fun facts about the Rose City. 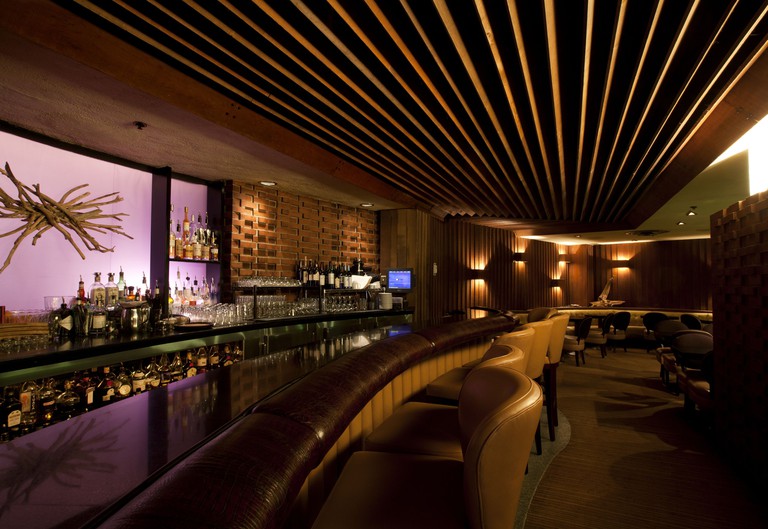 Courtesy of Hotel deLuxe / Expedia
Set west of I-405, this updated historic inn has a lobby worthy of a movie set, occasional pop-up film screenings and a classic cocktail lounge. The rooms are charming but a bit on the small side. The Goose Hollow location northwest of downtown is good for accessing Forest Park and Washington Park attractions, including the Portland Japanese Garden and the Oregon Zoo. 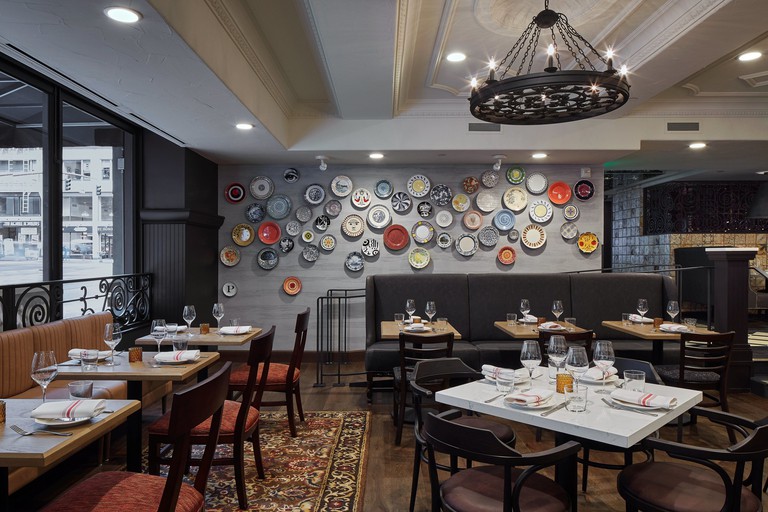 Courtesy of Kimpton Hotel Vintage Portland / Expedia
The Kimpton Hotel Vintage Portland appreciates all things wine-related, from a nightly tasting session in the lobby to wine-themed decor and rooms named after Oregon wineries. No two rooms are alike. Take the spiral staircase from the lobby to the Game Lounge stocked with pool, shuffleboard, and even Xbox and Nintendo consoles. The restaurant, Il Solito, serves East Coast-style Italian food. 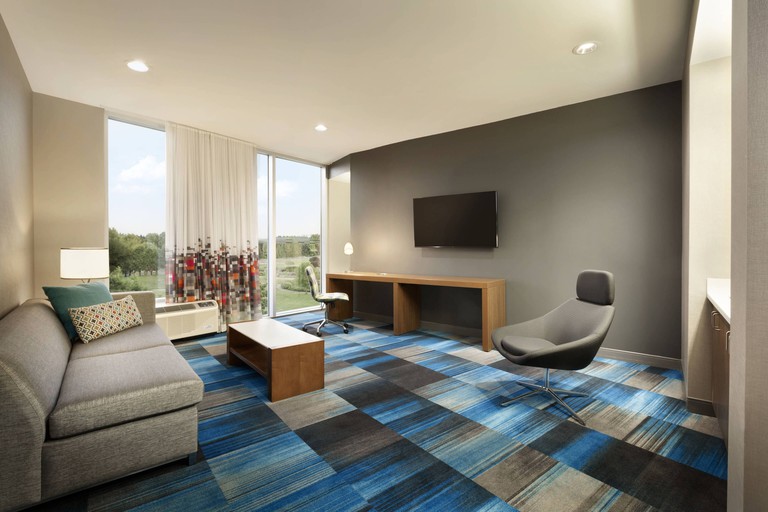 Within a 20-minute drive of Forest Park, this suburban outpost of the Aloft chain is a good bet if you prefer to stay out of the city. The hotel caters mainly to business travelers heading to Intel or Nike, but families like it, too. The lobby has games, including a giant Jenga set and a pool table, and the indoor pool is a nice plus. 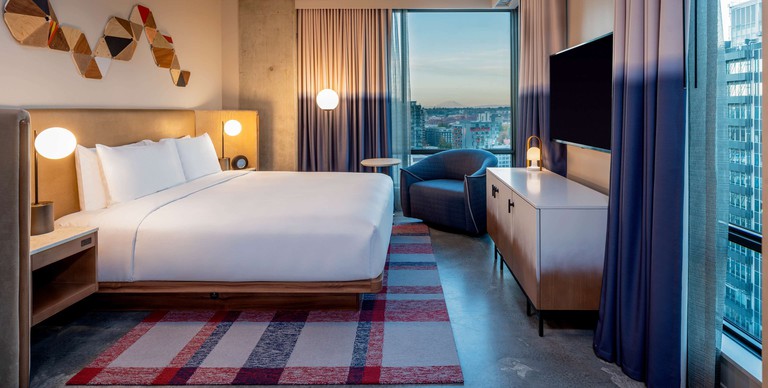 Hyatt’s take on the modernist hotel features an ideal location (on the north side of downtown) for outdoor treks plus some serious shopping in the Pearl District, home to Powell’s City of Books and many hip national chains. Room amenities include a Keurig coffee maker, a Drybar Buttercup blow dryer and under-the-bed mood lighting. Also, an on-site 24-hour market features lots of local food and beverages to try.

Looking for somewhere different to stay? Via Culture Trip, book into one of the best boutique hotels in Portland, or if you’re traveling with a four-legged friend, opt for a top pet-friendly stay. Inspire your itinerary with our guide on what to see in the city, including the best beaches nearby. Don’t miss the best nightlife in Portland.