The Best Gluten-Free Bakeries in Portland 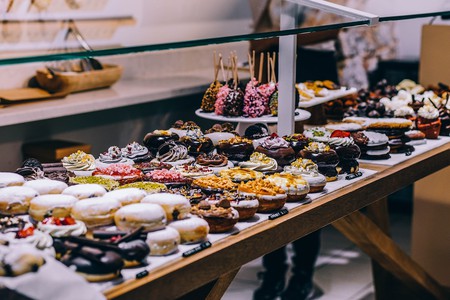 Portland has an abundance of gluten-free bakeries | © Pexels / Pixabay

Some Portland bakeries are completely gluten-free, but you’d never know from tasting their mouthwatering loaves of bread, pastries and desserts.

Portland is a foodie’s paradise. The city’s food cart culture is something to behold. Plus, vegetarian and vegan options are boundless, and gluten-free restaurants are abundant. However, those with celiac or those who simply want to cut wheat out of their diet have a harder time finding a bakery that caters to their needs and tastes good. Complaints of gluten-free baked goods are usually the same: the bread is too flaky, the pastries too bland, the desserts too dry.

These seven Rose City establishments manage to cut out the wheat without sacrificing flavor and texture. They also operate out of totally wheat-free facilities, so those with a severe intolerance can treat themselves without fear. Next time you’re in Portland and eating gluten-free, check out these seven bakeries.

Aside from being completely gluten-free, Back to Eden also operates out of a vegan kitchen and is aware of common allergies (soy, nuts, potato, coconut, etc.), so it makes an effort to omit those ingredients from its cooking and baking whenever possible. The bakery also mixes its own flour blend that is nut-, soy-, coconut-, potato- and bean-free.

The café is rooted in Northeast Portland’s Alberta neighborhood and serves a full breakfast, lunch and dinner menu, as well as delectable pastries (think raspberry rose brownies). However, if you’re coming to Back to Eden specifically for the sweet stuff, the Dessert Bar next door to the café or the Bakery food cart in Woodstock are where you want to go.

Gluten Free Gem is one of the city’s oldest quality purveyors of GF sweets. The bakery has been selling its tasty baked goods all over the city in cafés and markets, including Floyd’s Coffee, The Arbor Lodge, Kure Juice Bar, New Seasons, Zupan and Green Zebra, for years, and now, it has a retail shop of its own. It operates out of a completely gluten-free facility, so no matter where you are on the spectrum, you can enjoy that muffin, brownie or custom cake without fear.

Kyra Bussanich attended the prestigious Le Cordon Bleu patisserie program and is the only four-time winner of Cupcake Wars, so with those accolades, Kyra’s Bake Shop is a must-visit. The gluten-free bakery is just outside of Portland, in Lake Oswego, but it’s well worth the drive. Her cupcakes, donuts and muffins are fluffy, moist and bursting with flavor. If you’re craving something more savory, the café also offers a selection of delicious breakfast and lunch items.

Wheat-free eaters have long praised New Cascadia Traditional because its bread actually tastes and feels like bread rather than that flaky, odd-tasting mess usually associated with GF loaves. Aside from some of the best gluten-free bread that you can find in town, the Southeast bakery also specializes in muffins, scones, cakes and other delicious baked goods. Stop in early for a lox-covered bagel or challah french toast during Sunday brunch. Cruise in for lunch and scope out the various sandwich and pizza options. And if you have celiac, fear not – the bakery is 100% gluten-free.

Eight years ago, Jenn Pereau had a piece of raw, vegan cheesecake in Austin, Texas, that changed her life. Upon returning home, she began experimenting in her kitchen in an attempt to replicate that heavenly dessert. She succeeded, and in the process, she concocted so many other raw, vegan delights that she decided to start a business: Rawdacious Desserts.

Pereau’s sweets can be found in restaurants all over Portland; however, it’s easiest to find her creations at Tiny Moreso, Pereau’s new little café in the Cully neighborhood. There’s a case stocked with Rawdacious treats, as well as a new menu of plant-based, gluten-free desserts, snacks, salads, smoothies and more.

Petunia’s Pies & Pastries has got it all – if you’re looking for gluten-free, vegan eats. As the name suggests, the downtown café offers a variety of decadent pies, pastries, donuts, cakes, bars and ice cream in homemade waffle cones. That said, Petunia’s also serves a wide selection of savory fare, including breakfast sandwiches, biscuits and gravy, mac and cheese, and pizza that is 100% gluten-free and 100% vegan.

Bakery, American, $$$
Facebook
Email
Twitter
Pinterest
Copy link
Share
Map View
Liberated Baking is just east of Portland, in Clackamas, and just like Kyra’s Bake Shop, it’s well worth the drive. The bakery operates 100% gluten-free, with no wheat, rye or barley products in its kitchen, and everything is made from scratch. Liberated Baking does offer vegan options on some items, but only if the taste isn’t compromised. Aside from a wide array of pastries, pies, cupcakes, bread and cookies, the bakery also offers breakfast and lunch fare.
https://www.instagram.com/p/Bie_vI7BlYI/?taken-by=liberated_baking
Open In Google Maps
16100 Southeast 82nd Drive, Clackamas, Oregon, 97015, USA
+15035459797
Visit Website
Give us feedback

Breakfast, Lunch, Dessert
Give us feedback