Rental Scooters Are Coming to Portland, Here’s What You Need to Know 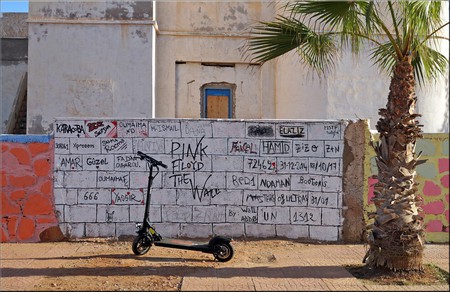 Shared e-scooters have become a craze in the U.S. | © mhobl / Flickr

A new era is upon Portland, and it’s the era of rental scooters.

Rentable e-scooters infiltrated a handful of U.S. cities in recent months, and Portland is the latest to join the craze. In the latest iteration of the nationwide scooter takeover, all you need to obtain these dockless transportation devices are a smartphone and good sense of direction to scour the city.

The concept behind the venture is a good one: allowing the public to rent motorized scooters that can be picked up and dropped off anywhere for a nominal fee. And the ultimate goal is to get people out of their cars and reducing carbon emissions. But, in hubs like Venice Beach, San Francisco, Austin, Washington DC, and Seattle, some problems with this concept are already waving red flags.

Though the idea of being able to drop off an electric scooter anywhere sounds genius in theory, it’s quite chaotic in practice. In metropolitan cities, careless users are haphazardly dumping their rides wherever they please and obstructing walkways in the process. Additionally, many of the start-up companies behind the scooters didn’t go through the legal steps necessary to begin business.

“Cities have been shocked to discover that thousands of electric scooters have been dropped onto their sidewalks seemingly overnight,” a recent New York Times article explains. “Often, the companies ignored all the usual avenues of getting city approval to set up shop.” San Francisco recently banned scooters all together until rental companies obtain city permits.

Nonetheless, Portland is now the latest to agree to a trial run with several e-scooter companies. With hopes that the venture will turn out more like Nike’s coveted cycle rental platform, Biketown, the city hopes to avoid the greater disaster that scooters caused in participating cities. The motorized two-wheelers are set to deploy this summer, so here’s everything you need to know before their arrival.

There will be several e-scooter providers involved

Portland Bureau of Transportation (PBOT) commissioner Dan Saltzman wrote a letter to potential e-scooter providers in May, laying down the rules before deployment. That letter instructed companies “must apply for and receive a business license and a permit.” The letter was sent to five companies—Skip, Spin, Lime, Bird, and Goat.

In the letter, Saltzman also made it clear the “Pilot Period” will last four months, after which officials will evaluate shared e-scooters’ value in the city to determine whether continuing the program makes sense. During the trial run, “providers will be expected to report on and mitigate impacts in several areas of concern that either the city has, or that have arisen in other cities where e-scooter companies are operating.” Those areas include pedestrian safety, accessibility for the disabled, compliance with state law, and anonymized ride data that logs trip origin, destination and length. Additionally, PBOT will seek input from the public.

Riders will need to abide by Oregon law

Oregon law states e-scooter riders must wear helmets at all times. Scooters are also required to use roadways and bike lanes, not sidewalks, which could pose problems in areas of the city that have not yet implemented bike lanes. Gabriel Scheer, Lime’s director of strategic development, addressed these concerns in a recent interview with The Oregonian. He hopes e-scooter rider data will help drive infrastructure improvements in underserved areas if the data shows ridership is there.