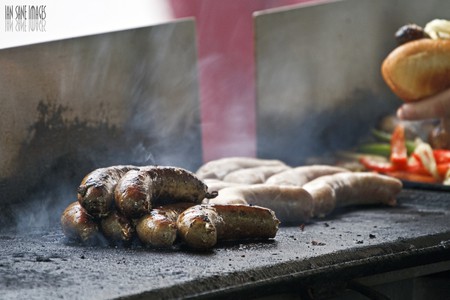 Sandwiched between Seattle to the north and San Francisco to the south, Portland is often passed over by travelers. We love the chilled out, cool vibe of the city.and think you will too. Here are 10 foodie reasons to skip Seattle and visit Portland. 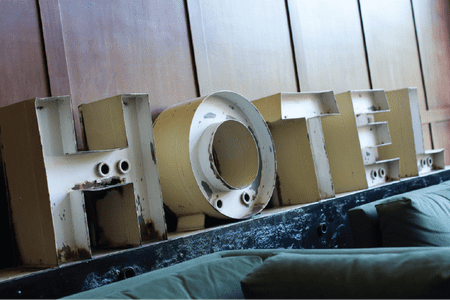 Although the Ace Hotel originated in neighbouring Seattle, the Ace Hotel in Portland so oozes hipster chic that it inspired the ‘Deuce Hotel’ in sketch comedy show Portlandia, which poked fun at and celebrated the city’s quirky vibe. Located in downtown Portland near the Pearl District and Powell’s City of Books, the Ace is also within walking distance of some of the city’s best foodie hangouts. Sip on cold brew coffee from local favourite Stumptown Coffee, located adjacent to the hotel lobby, or borrow a handmade Jordan Hufnagel bike and cycle around town in true Portland style. 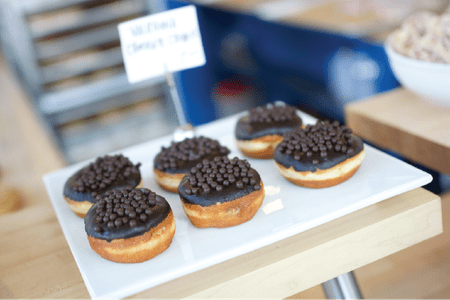 Voodoo Doughnuts, known for its quirky variations on the doughnut, is all the rage amongst Portland outsiders having been featured on the Travel Channel and in Man v. Food. But in our opinion, Blue Star Donuts, located on the edge of the Pearl District, focuses on perfecting the art of the classic doughnut. If you’re in luck and there are still some left (around 11am), the Creme Brûlée doughnut fresh from the ovens is phenomenally good, with a crackling layer and gooey centre. The Valrhona Chocolate Crunch was, arguably, the best doughnut we had at Blue Star Donuts. 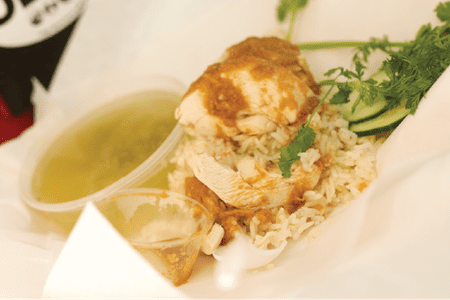 At first glance, Nong’s Khao Man Gai is nothing much to look at. Located in one of Portland’s famous food pods, food cart clusters dotted around the city, Nong’s menu is anchored by one deceptively simple dish, Chicken and Rice, or khao man gai. Inspired by Nong’s Thai heritage, having grown up in Bangkok, Nong’s poached chicken, cooked to perfection, is served on a bed of rice cooked in chicken broth and flavoured with herbs. On top of all this, Nong’s khao man gai is served with her specialty sauce, a blend of fermented soya beans, garlic, ginger, Thai chili, vinegar and sugar. This unbelievably delicious blend turns the humble dish into a truly unique experience. 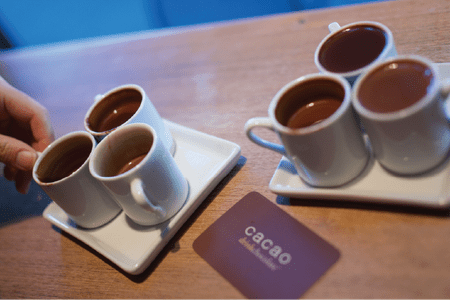 The aroma of chocolate wafts through the door as you step over the threshold into the world of Cacao. A world filled with chocolate delights, our first move was to order a flight of three drinking chocolates, classic, cinnamon and spicy, served in petite glasses that belied their immense flavour. The cinnamon had the perfect mix of sugar and spice and each of them had a luxuriant consistency that left us feeling deeply satisfied. After the drinks, we then perused the shop which is filled with handpicked, beautifully-packaged craft chocolate from around the world, including a rich selection of chocolate from local chocolate makers including Xocolatl de Davíd, CocaNu and Woodblock Chocolates. Selecting their chocolates by taste, Cacao ensures that all of their chocolate is sourced with the chocolate-lover in mind. 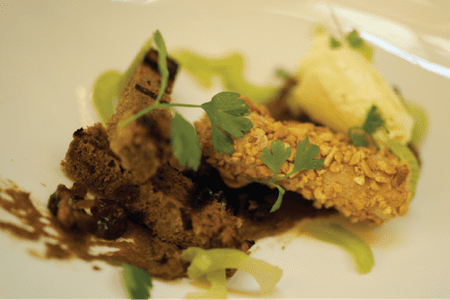 Le Pigeon is a French-inspired eatery that combines the creative and the classic, infusing traditional French flavours and styles of cooking with an innovative combination of ingredients that surprises the palate. From the Chef’s Table, get a front row view of the kitchen action as beef is seared, pigeon plated and sauces prepared. Otherwise, Le Pigeon offers shared informal (and cozy) seating around long wooden tables. Pigeon is, as its name suggests, a specialty. On our evening, pigeon wasn’t on the menu so we opted for an appetiser of Foie Gras ‘ants on a log’, which was white chocolate ice cream, peanut butter on a ‘torchon’ de foie gras. For our mains, we ordered Beef Cheek Bourguignon and Braised Rabbit served with shell pasta, cheese, truffle vinaigrette and crispy spring onions. All in all, a deliciously hearty meal. 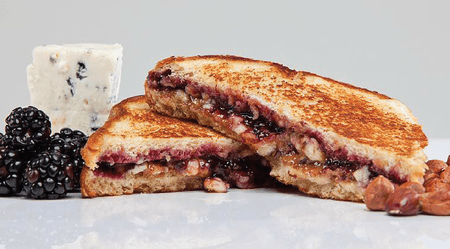 The humble, everyman Peanut Butter and Jelly sandwich gets a gourmet update at PBJ’s Grilled in Portland’s Alphabet District, a sandwich cart that serves up PB&Js in all their variety. Creators Shane Chapman and Keena Tallman thought: Why not throw in bacon, jalapeño or Sriracha in between some grilled bread with homemade peanut butter? And the menu at PBJ’s does just that. Whilst peanut butter and grape jelly is a heart warming favourite, PBJ’s menu bursts with creative variety, from Spicy Thai (PBJ’s peanut butter, Sriracha sauce, fresh basil, curry, orange marmalade) to Sun Up (Cinnamon raisin bread, wild flower honey, granola, bananas, PBJ’s peanut butter) and Pumpkin Pie (pumpkin butter, caramel sauce, pie crust, PBJ’s peanut butter). The resulting sandwich, grilled to tasty perfection, is a mouth-watering, stomach-warming delight. 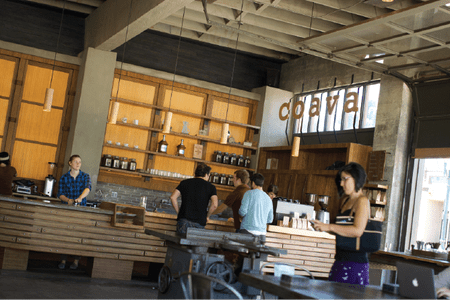 We heard about Coava Coffee long before visiting Portland having discovered the environmentally-friendly Chemex Coava Kone at a coffee shop in London. Thus on the second day of our stay in Portland, armed with our Jordan Hufnagel bikes from the Ace Hotel, we headed across the river to Coava Coffee’s warehouse brew bar, which opened in 2010. Situated in the coffee-loving Pacific Northwest, Coava Coffee sources single-origin beans that combine quality, complexity and balance. With innovation at its core and with a team of baristas immersed in the craft of coffee-making, from its humble origins in the founder’s garage, Coava Coffee started roasting its own specially-selected beans from around the world in a garage in 2008. Since then, Coava Coffee has quickly made a name for itself as a creative force in American coffee. Coava’s spacious café, excellent baristas and delicious coffee were well worth the trip. 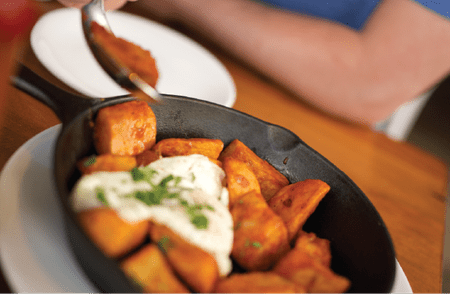 Having heard and read so much about Tasty n Sons from area locals, we were sorely disappointed to realise that Tasty was located across town from where we were staying. Having just about given up hope of enjoying its renowned brunch at Tasty, we stumbled upon Tasty’s newest location: Tasty n Alder. Having opened its doors in the spring of 2013, Tasty n Alder matches its sister restaurant in flavour and fervour — be prepared to wait for a table if you come during its notoriously busy brunch hours. Luckily we breeze in without a wait and ordered Patatas Bravas with eggs and aioli and Fried Egg & Cheddar Biscuit with fried chicken. The Patatas Bravas were incredibly well-seasoned and we fought to finish off the plate. Be warned that the platters are huge and meant to be shared. 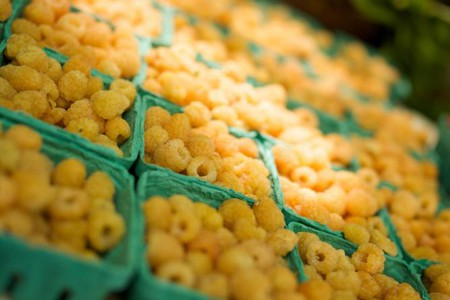 Portland celebrates its local food traders and farmers throughout the year at the many farmer’s markets dotted throughout the city. The Saturday Portland Farmer’s Market offers huge variety of fresh produce, meats, baked goods and prepared foods. The Market, which is located on the campus of Portland State University (PSU), also has stalls selling seasonal flowers, breads, jams, pickles, butters and more. For the freshest, most seasonal foods from across Oregon, the Portland Farmers Markets is the place to go. 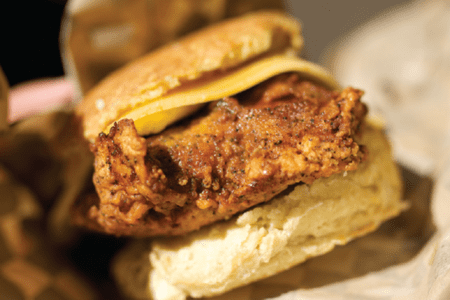 Southern food is comfort food, and Pine State Biscuits has brought southern comfort up to the Pacific Northwest where it’s made found a home at the Saturday Portland Farmer’s Market, giving us a two-for-one treat and an extra excuse to indulge. We joined the unmissable queue for biscuits at Pine State Biscuits. The menu is chock full of choices, which made choosing one item particularly agonising. In the end, we went for a classic: Buttermilk biscuit with fried chicken, cheese and drowned in gravy. If it weren’t for having a flight to catch, we would have hopped straight back into the queue after sharing one biscuit. Even with the rich, meaty gravy, the buttery flavours of the biscuit were strong and distinct, complemented by the fried chicken wedged in between. As our last stop before heading to PDX for the long flight back to London, Pine State Biscuits made for a perfect and delicious end to our stay in Portland.

More from our USA Dining Guide: