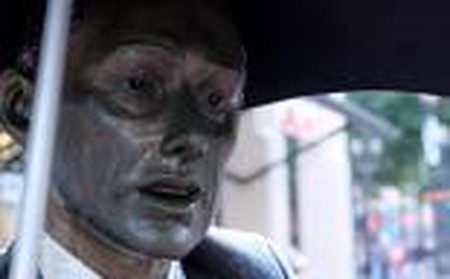 In the state of Oregon, Portland’s public art scene is a thriving collection of permanent and temporary works across all mediums including sculpture, video installations and murals. Carefully organised by the Regional Arts and Cultural Council, there is an ingenious work of art around every corner. Successfully merging art into public spaces, the art scene in Portland aims to represent the many differing viewpoints and creative communities across the city’s districts. 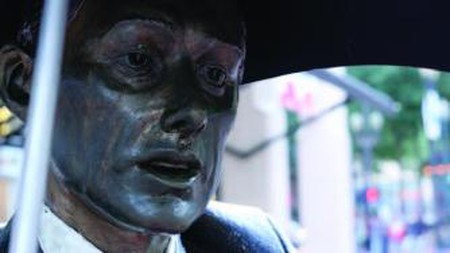 With his sculpture, Allow Me, J. Seward Johnson has created a celebrated landmark in Portland. The New Jersey based artist is best known for his realistic, life size sculptures, although his first dominant work The Awakening (1980) displayed a dramatic surrealism. Known throughout the United States, he gained international acclaim for his sculpture of a similar style, Waiting, which is located in Sydney, Australia. These playful sculptures are often mistaken for real people, and Allow Me has become a popular spot for photographers when visiting the city. 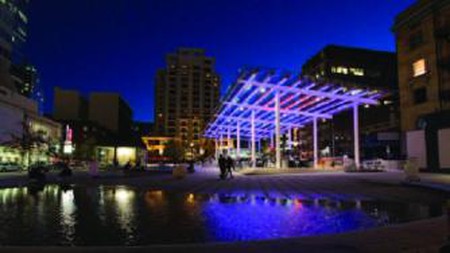 This video and light installation works to transform a basic structure of geometric precision into a moving surface of organic shape and colour. In this work, a video is emitted through LED tubes which are worked into the canopy structure, reflecting light off the glass roof and onto the nearby fountain. Mercurial Sky is particularly stunning at night. The artist has expressed a desire to soften the harsh lines of this concrete park by using footage of the movements found in natural aspects such as clouds, fire, water and animals like the jellyfish. 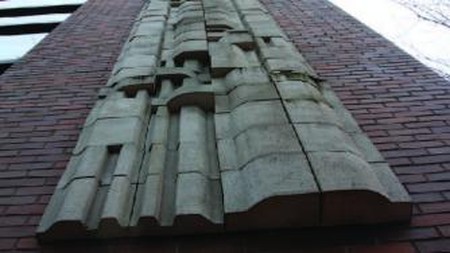 This structure of white stoneware is fixed onto the side of a parking garage, the red bricks of which contrast against the white colour of the stone used by Rogers. This large abstract work is representative of the artists’ former works, which are in hard materials such as metal, stone and concrete, and his studies at Portland State University where his focus was ceramics. The location of the structure and the shapes used by Rogers here display his affiliation with technical forms in sculpture, and their relation to architecture and engineering. 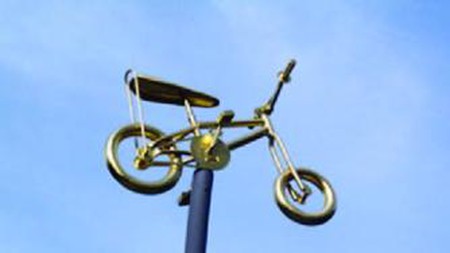 This popular public artwork is not only a testament to the thriving cycling community in Portland, but also works as a functioning bike rack and a ‘Zoobomb Pile’ which serves to lend bikes to those in need during the weekly event. Bikes are locked to the base of the sculpture and the top holds a golden bicycle so that it might be seen from afar. ‘Zoobombing‘ first began in 2002 and involves riding bicycles down Portland’s West Hills area, as quickly but as safely as possible. This homage to cycling portrays the community-driven side of the city and their emphasis on non-polluting methods of transport. 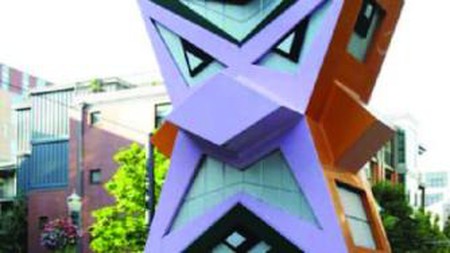 California-born artist Kenny Scharf is known worldwide for his bold works of painting, sculpture and collage in addition to other diverse media, with which he strives to connect the often inaccessible world of fine art to popular mainstream culture. Known throughout Portland simply as the ‘Tiki Totems’, this public installation consists of four totem poles, 30-foot tall, which are located around Jamison Square. Expressive faces run along the sides of the poles, framed in daringly bright colours. The artist has said that his goal in the creation of this artwork is for it to be enjoyable and fun, and these sculptures undoubtedly achieve this. 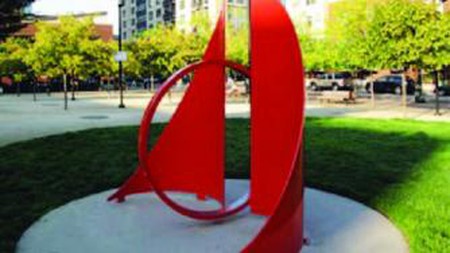 The late Alexander Liberman was an incredibly successful individual, originally from Russia before relocating to London, Paris and then New York. After a career as Arts Director for Vogue and Editorial Director of Condé Nast publications, he turned his skills to practicing the arts and began creating works of geometric abstraction. In addition to working with paint, Liberman’s works of steel are known for their grand appearance and size, and the ways in which they address the spectator. Contact II is representative of Liberman’s oeuvre as it is painted in red and its form centres on a circular shape, both of which were often repeated in his works. 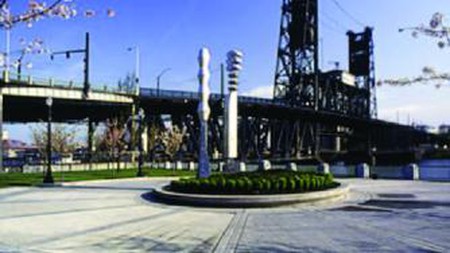 These two stainless steel sculptures are a tribute to the tie between Portland and its sister city, Sapporo, Japan. Designed and created by established sculptor Lee Kelly the works stand at 20 feet tall and emit electronic tones, which were created by composer Michel Stirling. Throughout his commissioned pieces, Kelly favours large scale projects, whilst aiming to combine the design with newly available technologies. In this case music is played through the structures to passers by. Kelly’s rich history of travelling the world and his passion for mountaineering are seen through the shapes used in Friendship Circle and its function in promoting international affairs. 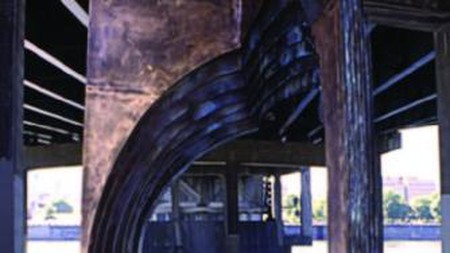 Located within the historically important Eastbank Esplanade in downtown Portland, Echo Gate is just one of four works of public art that can be found here, created by a group of local Portland artists called RIGGA. The first of four, Ean Eldred’s Echo Gate uses rustic-looking copper which has been heat treated, fitted and welded into shape. Harking back to the past, this gateway tunnel is seen to be reminiscent of the Shanghai tunnels of Portland’s history and the commercial use of the piers; the installation’s shape replicates the pier structures surrounding it. With a view over downtown, this is a popular spot for walkers and cyclists in the city. 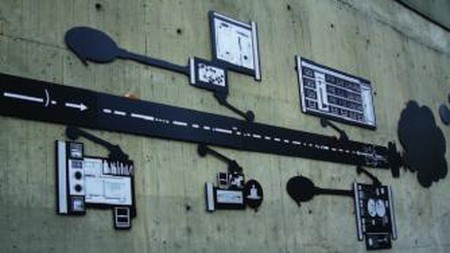 This site-specific work was commissioned by Portland State University and reflects the creative dialogue within the creative community of Portland. Using laser cut and etched aluminium, Ginsburg portrays the physical act of travelling as a metaphor for sharing thoughts and creative ideas. Conduit consists of two forms, one illustrating thought and the other communication. Linking them is a road, along which the processes are tied. To outline these processes the work also includes visual maps of different aspects of life including work, home and learning, which are all connected to the act of travelling. 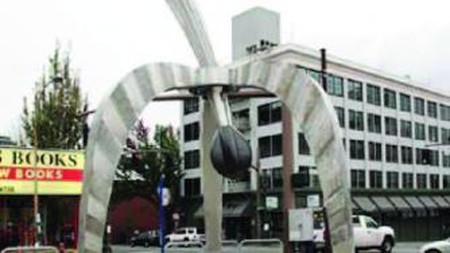 This well-known modern sculpture is an interactive piece that encourages the public to move the counterweight, or Pod, part of the structure in order to move the upper and lower sections. Essentially serving as a massive pendulum, the artwork consists of a vertical section which wildly swings about above the individual as they push the central pod and three supporting legs, which bounce around on their wheels the more vigorously the pod is shoved. Standing at 30 feet tall, the artist has said that the piece reflects the ‘vibrancy of Portland’ and it certainly illustrates the community’s thorough enjoyment of art.

Take a walk through Portland to view the rest of their public artworks, using Portland’s Public Art Guide.