Bible Club Is Where Portland Liquor Connoisseurs Come to Pray 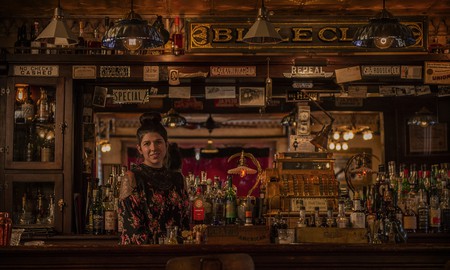 Bible Club is Portland’s unique intersection between liquor and religion. And the Sellwood establishment is so much more than just another speakeasy. 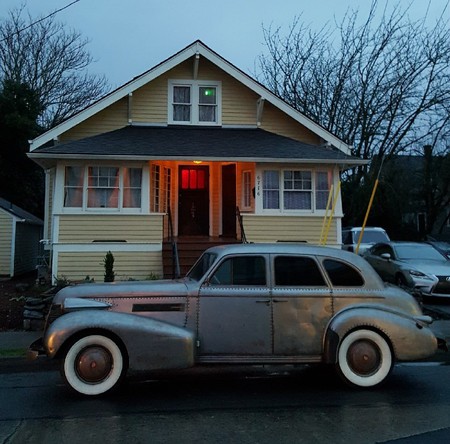 As soon as you open the front door, you’re teleported to the 1920s. To your right, there’s a sturdy wood bar with plates tacked up behind it that say “REPEAL 18th AMDT FOR PROSPERITY” and “WIN WITH ROOSEVELT.” To your left, tabled seating includes plush sofas and wooden chairs. You may think that you just walked into a speakeasy-style bar, but founder Ryk Maverick doesn’t like to call it that. To him, it’s a museum you can drink in.

Ryk is an antiquer, among other things, but was never impressed by the Prohibition-era bars he visited. “I was excited time and time again to visit these old-type bars all over the world and 99% of the time [was] disappointed,” he admitted. “I always thought of what I would do different as to not ruin the vibe, the illusion of stepping back in time.” 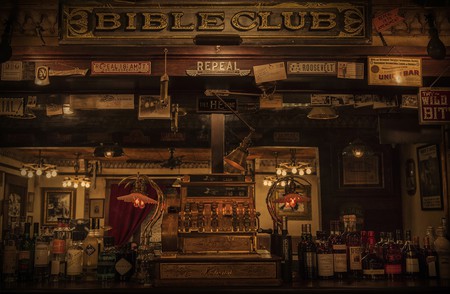 When Bible Club started transforming from vision to reality, Ryk shopped around for American-made, pre-1930s antiques—he bought pieces from Etsy and eBay and searched antique shops in the U.S. and Europe. He went to swap meets and estate sales all over the world. When it came time to open the bar, most everything inside was authentic, from the crystal glassware and doily coasters to the “HOOVER” plaque in the men’s bathroom floor that’s used as a piss guard. Even the music played in the bar is era-appropriate.

As for the house, its location wasn’t chosen by accident. “The Westmoreland-Sellwood area was of particular interest to me because of the amount of quality antique stores and the overall vibe of the neighborhoods,” Ryk explained. The 1922 craftsman was a residential home until the ’80s and a coffeehouse with a sterile, white interior for 20 years after being commercially zoned.

It took Ryk a year and a half to remodel the house to his liking. He gutted the place and then went through the process of putting in new (er, old) flooring, wallpaper and lighting. Even the ceiling was meticulously thought out. It’s completely unrecognizable from its past lives.

Bible Club before and after | © Bible Club

The food and drinks are made with the same amount of thought and care that went into the bar’s aesthetic. Bible Club’s provisions are all made in-house, and its libations are crafted with premium spirits (you won’t find well liquor behind the bar) and made-from-scratch cocktail components. The menu ranges from “Proprietary Libations,” which include signature drinks like the smoky mezcal/scotch creation “Peat and Play” and the refreshing tequila-forward “Wishing Huel,” to “Heritage” cocktails, which see Bible Club put its spin on classics like the Mai Tai and Penicillin.

For those who are feeling extra mischievous, ask for the “Seven Deadly Sins” menu, where you’ll find a Manhattan made with WhistlePig 15 Year Rye and an Old Fashioned made with Joseph Magnus Cigar Blend Bourbon. 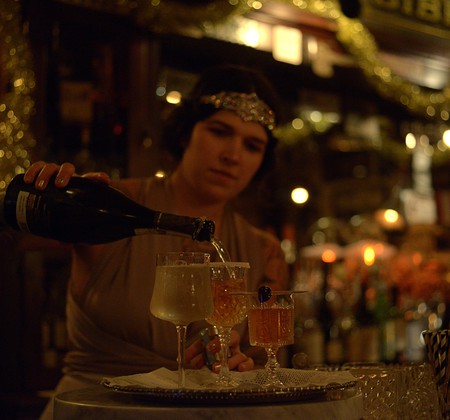 Bible Club’s name wasn’t a coincidental choice either (Ryk said he has family members who won’t talk to him after he opened the bar), and its owner knew Portland was the perfect locale for such a blasphemous establishment. “Portland [encompasses a] spirit of being able to be a bit cheeky with religion,” Ryk said with a smile before noting that Bible Club could have been burned to the ground if opened in other parts of the country.

There are so many reasons why Ryk Maverick opened this special bar—to display the art of yesteryear, to create a space for people to drink and socialize comfortably—but when asked point-blank why he was fascinated with the Prohibition era enough to open Bible Club, his answer is simple. “To be honest, I have always (like many kids) had a fascination with booze, gals and guns,” he confessed. “This is about the closest I can come legally to feeling a part of that [time in] unique American history.”