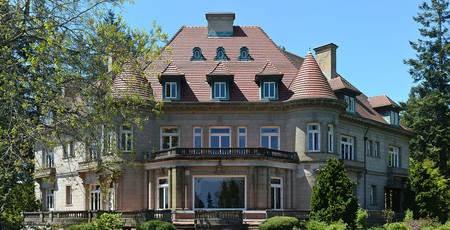 Nestled high in the West Hills of Portland, Oregon, the Pittock Mansion sits majestically on 46 acres of land, boasting a panoramic view of the city, Willamette River, and the Cascade Mountains. The French Renaissance-style château has been an icon of the Rose City since its construction in 1909 and acts as a history lesson on one of Portland’s most influential, respected, and wealthiest men at the turn of the 20th century: Henry Pittock.

Pittock arrived in Oregon from Pennsylvania “barefoot and without a cent” in 1853, but all of that quickly changed. After eight years of working as a typesetter for the Oregonian, the 25-year-old was given ownership of the debt-ridden newspaper after his boss Thomas J. Dryer, was hired as part of President Lincoln’s administration. Pittock made it his life’s work to transform the paper into a lucrative business that is still printing today.

As Pittock’s fortune grew, he and his wife Georgiana dreamed up what would become the Pittock Mansion. Built by the Oregon-born architect Edward T. Foulkes, the 16,000 square-foot marvel was ready for habitation in 1914, and the Pittocks, along with eight family members, promptly moved in. 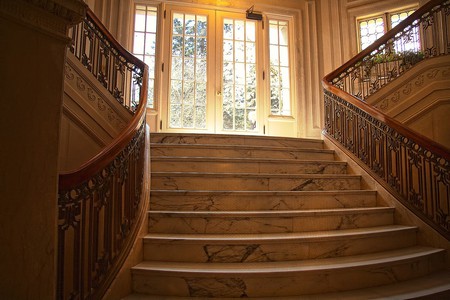 Despite its massive size, the home was designed for a family with its largest room being the children’s playroom. A large marble central staircase took up a third of the mansion’s space and connected three stories. An adventurer at heart, Henry is rumored to be one of the first mountain climbers to reach Mount Hood’s summit in 1857. Subsequently, he positioned a mirror on the west wall of his grandiose Edwardian dining room to reflect the great mountain, so everyone could have a view during meals.

But the views didn’t stop in the dining room. The house itself was built in a unique oval-shaped design with wings attached at a 45-degree angle to ensure the most awe-inspiring views of the city all over the expansive abode.

Unfortunately, Mr. and Mrs. Pittock were only able to enjoy their masterpiece for a few short years. Georgiana passed away in 1918 and Henry a year later. As the story goes, the night before he died, the great adventurer, stricken with grippe, asked to be carried to an east bay window to look at the vista across the city that held his legacy one last time. He passed away on January 28, 1919, at the age of 83. Other family members occupied the estate until 1958, and for years after that, the once-breathtaking architectural feat laid dormant. 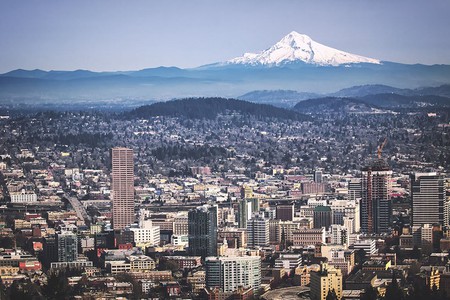 It was in the mid-sixties when Portland’s local treasure made way as a city-wide landmark. Portlanders rallied together to help the city purchase the estate for $225,000, finally labeling it a landmark. After 15 months of restoration, the mansion opened to the public in 1965.

Five decades after first opening its doors to the community, the Pittock Mansion is a magnificent reminder of how Portland grew into the city it is today. Classic Houses of Portland calls it “the most beloved…of all the great houses of Portland….It typifies the success of the nineteenth-century American entrepreneurial spirit.” It also signifies the adventurous spirit of Henry Pittock and the great Pacific Northwest, acting as a stop on Forest Park’s famous Wildwood Trail.

Replete with rich history, breathtaking interior features, and the best views of the city from 1,000 feet above sea level, Henry Pittock’s legacy will always be remembered within the walls of his “House on the Hill.”