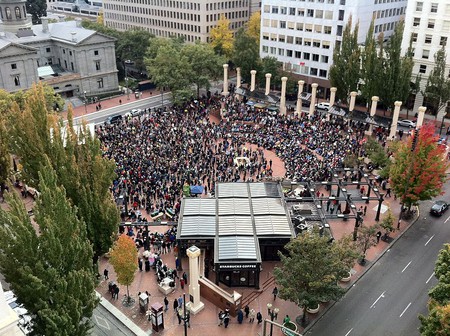 Located in the heart of downtown, Pioneer Courthouse Square – dubbed Portland’s “living room” – is a public park and gathering space operated by a non-profit organization. With the help of donations, volunteers, and the City of Portland, the square provides a public space for events, traditions, and annual programming for the community. The space, occupying an entire 40,000-square-foot (3,716-square-meter) city block, opened in 1984, but its history dates back to over a century ago.

The block that would later become the site of the Pioneer Courthouse Square was first purchased in 1849 by shoemaker Elijah Hill for 24 dollars and a pair of boots. In 1856, the school board purchased the block, opening the first public school in Portland – Central School – in 1858. In 1883, Henry Villard bought the block as the site for a new hotel, and the school moved a block north to the present-day American Bank Building. The eight-story Portland Hotel, completed in 1890, contained 326 rooms, a restaurant, ballroom, billiard room, bar, ladies’ parlors, a telegraph office, and a news and cigar stand. 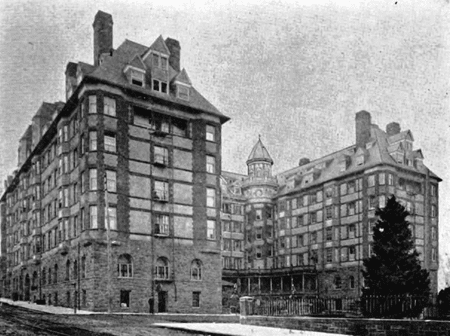 In 1951, Meier & Frank purchased the site; the hotel was torn down and replaced with a two-story parking structure. Much of the original stone foundation of the hotel remains under the sidewalks today. In the late 1960s, Meier & Frank proposed another parking structure, but this time plans included a much larger 11-story parking garage. The plan was denied by the City of Portland, prompting the development of a planning program for Portland’s downtown. 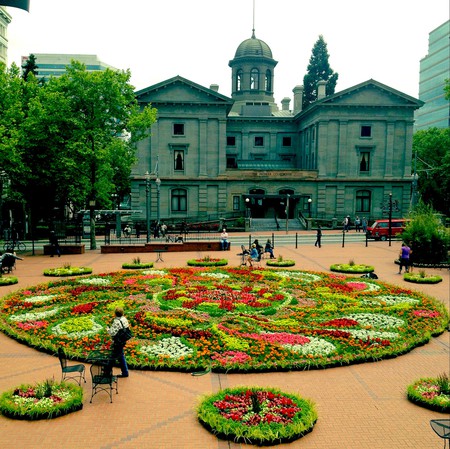