8 of the Best Independent Bookstores in Portland, Oregon 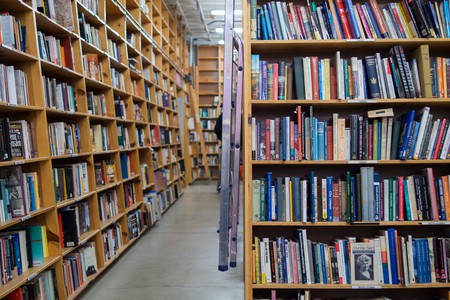 Home to a treasure trove of poets, writers, and literary greats (dead and alive), Portland, Oregon, still retains its bookish reputation as a city that loves to read. A literary town in every sense of the word, with among the highest literacy rates in the U.S. (along with the greenest!), Portland is a perfect place to think and be creative, so it should come as no surprise that the city is home to many wonderful independent bookshops, large and small. Here’s a list of what not to miss if you happen to love the smell and sight of books.

This list might as well start with Powell’s since no list of Portland bookstores would be complete without the literary institution. The West Coast’s counterpart to New York City’s celebrated 18 miles of books that is the Strand Bookstore, Powell’s City of Books opened its doors in 1971, and it now claims to be the largest independent bookstore in the world. With seemingly never-ending shelves and aisles of new, used, rare and out-of-print titles, Powell’s continues to delight local readers and traveling bookworms visiting from around the world.
Open In Google Maps
1005 West Burnside Street, Northwest Portland, Portland, Oregon, 97209, USA
+18008787323
Visit Website
Visit Facebook page
Give us feedback

Bookstore
Facebook
Email
Twitter
Pinterest
Copy link
Share
Map View
Sitting proudly on Irvington’s NE Broadway since 1992, Broadway Books is a local favorite, delivering all kinds of titles to all kinds of readers, but a few years ago, it looked like the shop’s end was near. Founder Roberta Dyer’s son Aaron Durand had something of a social media presence and decided to take matters into his own hands. With what started as a single tweet, Broadway Books went on to experience its most profitable holiday season, and business has been thriving ever since.
Open In Google Maps
1714 Northeast Broadway, Sullivan's Gulch, Portland, Oregon, 97232, USA
+15032841726
Visit Website
Give us feedback

Tucked away in the Southwest Portland neighborhood of Multnomah, one finds Annie Bloom’s Books, a small bookshop with a lot of charm. Locals love it for its handpicked selection of titles, local author section, customer service, and its great assortment of greeting cards—as well as the resident cat, Mollie Bloom, of course.

Bookstore
Facebook
Email
Twitter
Pinterest
Copy link
Share
Map View
Just south of Reed College and the beautiful grounds of the Crystal Springs Rhododendron Garden, Wallace Books can’t be missed—and not just because its home is a blindingly bright yellow house with blue trim. Regulars appreciate the bookstore’s fair prices and labyrinthine stacks and piles of volumes. Whether you’re looking for new or used, or have an hour to get lost among its many titles, Wallace Books is where to go.
Open In Google Maps
7241 Southeast Milwaukie Avenue, Southeast Portland, Portland, Oregon, 97202, USA
+15032357352
Visit Facebook page
Give us feedback

Known for its unique array of rare and antiquarian volumes, as well as periodicals, posters, maps, and vintage ephemera, Longfellow’s Books & Music on Southeast Division is one of Portland’s more niche literary destinations. With over 7,000 titles in its inventory and limited hours (1–5pm, Monday through Saturday—sometimes), this family-run business is best contacted directly, especially if you’re interested in browsing in person or selling that very special tome.

Wish this shop was open, such a shame 📙

Bookstore
Facebook
Email
Twitter
Pinterest
Copy link
Share
Map View
A literary heaven for serious bibliophiles, Mother Foucault’s Bookshop manages not to be too intimidating (though perhaps a bit pretentious, according to some). Others believe it to be one of the best bookstores in the United States, curated to feature stunning selections of poetry and high-brow literature—“like the library of a very educated, very wealthy person,” according to one fan.
Open In Google Maps
523 Southeast Morrison Street, Buckman Neighborhood, Portland, Oregon, 97214, USA
+15032362665
Visit Facebook page
Give us feedback

In Other Words Feminist Community Center

Bookstore, Shop
Facebook
Email
Twitter
Pinterest
Copy link
Share
Map View
Reaching national fame thanks to a little television show called Portlandia(which the shop does not hold in very high regard, at all), the In Other Words Feminist Community Center is a beloved independent bookstore operating in the Piedmont area of Northeast Portland. In Other Words is a perfect place (and a safe space) to find all sorts of books, as well as zines and gifts such as knitted goods, handmade jewelry, and empowerment-focused artwork. Its only drawback? “Due to the patriarchy,” they require a $5 minimum on credit and debit card purchases.
Open In Google Maps
14 NE Killingsworth St, Portland, Oregon, 97211, USA
+15032326003
Give us feedback

Bookstore
Facebook
Email
Twitter
Pinterest
Copy link
Share
Map View
Sitting in the Alberta Arts District, Green Bean Books offers a literary haven for the kiddies. Children’s books and educational toys, along with events and story hours, make it a family favorite across the city. Portland parents come from near and far to expose their kids to the joy of reading and wonder of stories. A lovely patio makes for a perfect storytime setting on warmer days, and the store is worth a look even if you don’t have kids.
Open In Google Maps
1600 Northeast Alberta Street, Vernon, Portland, Oregon, 97211, USA
+15039542354
Visit Website
Give us feedback
Give us feedback