The 9 Local Restaurants You Should Try in Eugene, Oregon 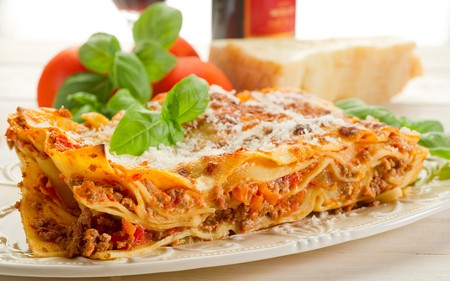 From fresh seafood venues to home-brewed beer taverns, Eugene is full of dining potential. Full of great restaurant options for every kind of taste, Eugene stands out for its eclectic culinary traditions and gastronomic experimentation. Here are our top 10 local places where you can try the best the city has to offer. 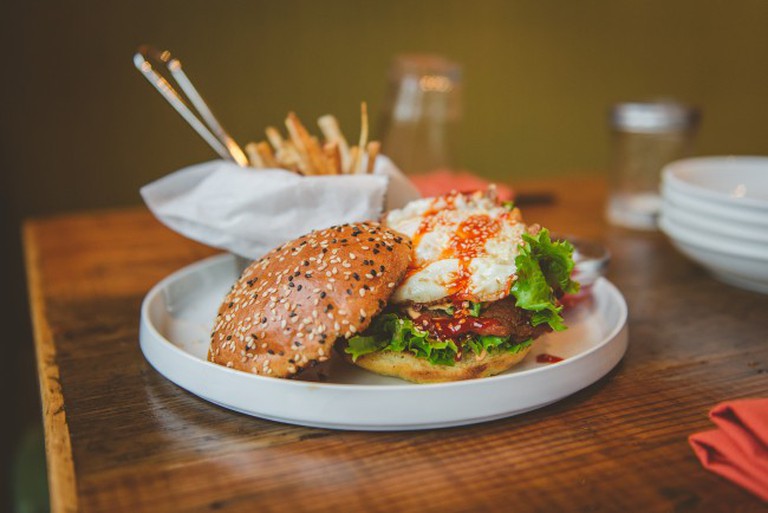 Asian fusion | © Kurman Communications, Inc./Flickr
‘Where East meets country and western’ is the motto of Izakaya Meiji, one of the best Japanese restaurants in Eugene. The concept behind the restaurant is Asian fusion, with a menu consisting of tapas-style plates, ranging from shiitake mushroom skewer with miso butter to onigiri with wasabi and flavoured salt. Located in the small and colorful Whiteaker neighborhood, Izakaya provides a fun and unique experience for those who want to experiment with exotic cuisine without giving up western traditional dining.
Open In Google Maps
345 Van Buren Street, Whiteaker, Eugene, Oregon, 97402, USA
+15415058804
Visit Website
Give us feedback

Featuring the finest Northwest seasonal ingredients and French bistro traditions, Marché represents one of the most successful experimental restaurants in Eugene. It takes its name from the French word for market, describing not only its location in 5th Street Public Market, but also its philosophy of cooking. The menu is based on the food found at a farmers’ market — fresh, seasonal and regional. This farm-to-table venue serves great hors d’oeuvres such as pillowy gougères, spiced rabbit rillettes, amazing duck confit salad and grilled steak with golden pommes frites. Only organic, free range and chemical free products make it into Marché’s high quality food.

As the name suggests, this cozy restaurant is located in downtown Eugene, and it is one of the most creative venues in the city. Although it only opened its doors in May 2013, Party Downtown is already an institution in town: its goal is to serve organic and creative food, which is the reason why the menu changes weekly. Everything is made by the owners Mark and Tiffany using local ingredients: their pig-skin braciole with fennel sausage and their barley risotto are their top specialties, and their cocktails are creative and original.

Born out of the founders’ ambition to build up a vegan venue, Cornbread Cafe’s goal is to make local and organic food, and are strictly against genetically engineered ingredients. The cozy atmosphere, friendly staff and vegan comfort food are the magical ingredients here. The location is as particular as the meals served; set in an old fashioned 1950s diner, with thick and heavy coffee cups and a checkered floor, this restaurant taps into customers’ nostalgia. A must-try are the fried chicken tempeh with gravy and mashed potatoes, and the spicy jalapeno cornbread, as well as the Eugenewich Sandwich with Ju Ju’s potato wedges.
Open In Google Maps
1290 West 7th Avenue, West Eugene, Eugene, Oregon, 97402, USA
+15415059175
Visit Website
Give us feedback 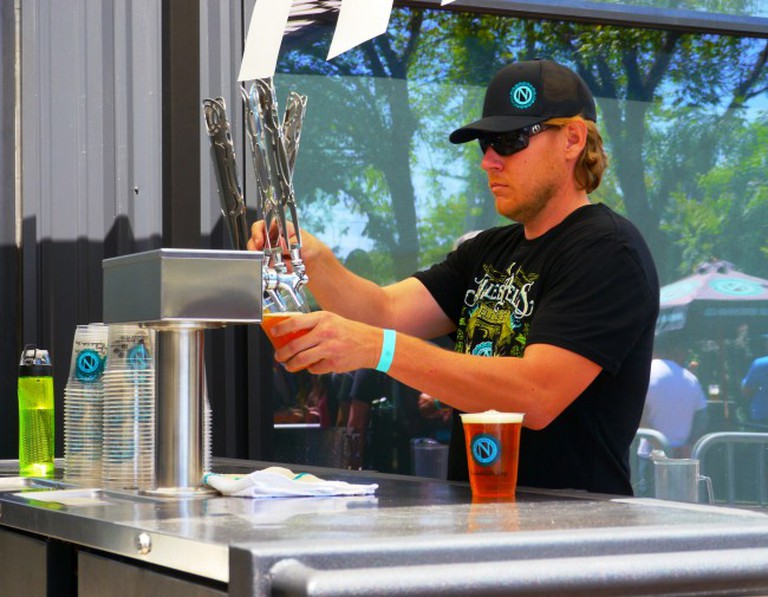 Barman pulling a pint at Ninkasi Brewery | © Rick Obst/Flickr
An Oregon producer of high-quality beers, ales and lagers since 2006, Ninkasi Brewery is famous around town. Fully devoted to local resources, including pure Cascade Mountain water from the McKenzie River and hops from the Pacific Northwest, the village brewer makes what founding brewer Jamie Floyd calls ‘beer geek beer’ with mass appeal. Housed in an old retro-fitted plumbing company, Ninkasi Brewery is the right place for an informal evening spent drinking their flagship Total Domination brew accompanied by some good pub-style food. Tasting rooms are open every day of the week, and will give customers the chance to test their huge selection of beers. Although the Ninkasi doesn’t have a kitchen to call its own, drinkers take take their pick from the many gourmet snack carts that set up on the patio, ready to serve the best in homemade take-away fare.
Open In Google Maps
155 Blair Boulevard, Whiteaker, Eugene, Oregon, 97402, USA
+15417359500
Visit Website
Give us feedback

Authentic kettle-boiled and stone-hearth baked bagels can only be found at Bagel Sphere in Eugene. The small venue features 17 varieties of bagel, all of them made from scratch daily. The restaurant was established in 1995 by Jim and Tamara in its downtown location, and since then has become a required stop in the city. Breakfast bagels, lunch bagels and a selection of different menus and melts are all available, but this venue also stocks a good variety of homemade salads, soups, muffins, brownies and other treats, as well as a selection of hot and cold drinks. 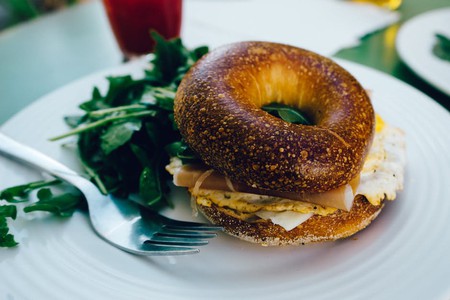 Restaurant, Seafood, BBQ, American, $$$
Facebook
Email
Twitter
Pinterest
Copy link
Share
Map View
Only an hour away from the Oregon coast, Eugene offers a good variety of seafood restaurants, and Fisherman’s Market is one of the best choices. Owned and operated by two long-time Alaskan fishermen, Ryan and Debbie, who handle the eatery when not fishing in Alaska, this venue is both a rich fish market and a fine-dining place. Whether dropping by for a quick takeaway order of fish and chips or staying for a crab or lobster dinner, one can enjoy delicious halibut, cod, mahi-mahi and other seafood entreés, including their masterful salmon-based fish and chips. Thanks to its two experienced owners, Fisherman’s Market offers a great selection of the freshest seafood available, often right off of the boat.
Open In Google Maps
830 West 7th Avenue, West Eugene, Eugene, Oregon, 97402, USA
+15414842722
Visit Website
Give us feedback

A branch of Agate Alley Bistro, Agate Alley Laboratory stands out for its eclectic menu and its unusual mad-scientist theme. The name is symbolic of the restaurant’s conceptual approach to offering the best of the Northwest, but with an experimental element of international cuisine. Customers can choose between the Big Bang Theories menu, Potions and Elixirs, and other sophisticated and ever-changing meals. Their dungeness crab bisque garnished with fried sweet potato and fried squid tossed with korean chili flakes, seasoned flour and sweet chili sauce and jalapeno are not to be missed, as well as their delicious avocado cheesecake, although the menu will change, evolve and metamorphosise on a monthly basis. 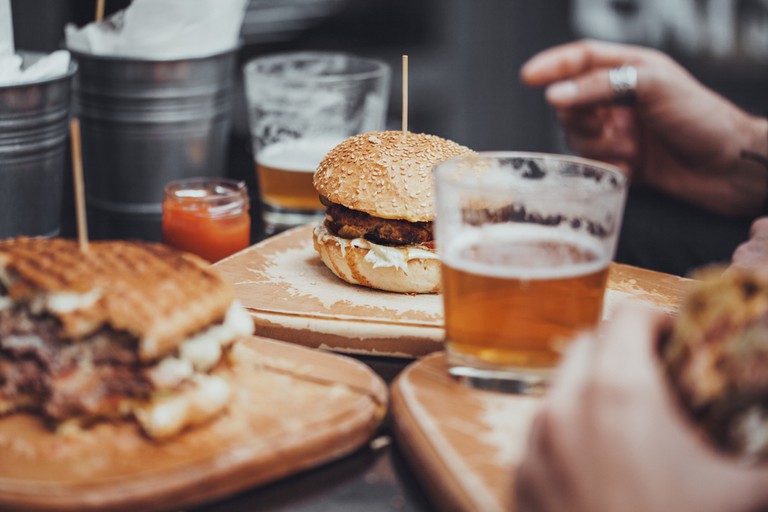 Burger & Beer at The Vintage | © NatashaPhoto / Shutterstock
When best friends Megan and Shannon opened The Vintage, they wanted a place that would be part of Eugene for years to come. A cozy place for a first date, a relaxed venue for brunch with friends or an unusual location to bring visitors, The Vintage started as a childhood dream and finally came true in 2006. Winner of second place in the ‘Best Burger and Beer’ and third place in the ‘Best Cocktails’ category in the Best of Eugene 2013 award, this cute and homey restaurant has a charming back patio where guests can enjoy a tasty breakfast or a fine lunch. Try the The Vinatge’s mouth-watering crepes, famous fondues and their delicious cocktails.
Open In Google Maps
837 Lincoln Street, West Eugene, Eugene, Oregon, 97401, USA
+15413499181
Visit Website
Give us feedback
Give us feedback