The Most Beautiful Rivers in Oregon You Need to Explore 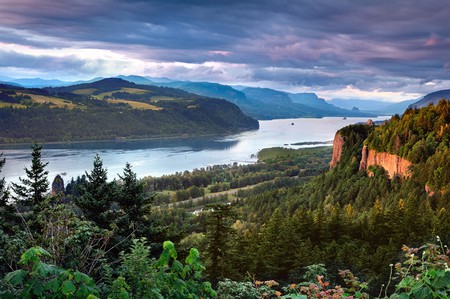 The diverse landscape of the Pacific Northwest – rolling hills of pine, mountain peaks, verdant forests, and sandy beaches – is home to some of the most captivating scenery in America. And rushing through it, find thousands of miles of waterways; Oregon alone has over 110,000 miles (177,028 kilometers) of rivers, nearly 2,000 miles (3218.6 kilometers) designated Wild and Scenic.

This tributary – a 12-mile (19.3-kilometer) extension of the larger Willamette River – is relatively short, but equally beautiful. The North and South tributaries rise in the Cascades, with the North impounding to form Detroit Lake and the Middle joining with the South to form Foster Lake. Along the North Santiam River, find fishermen casting a line for local Chinook salmon and steelhead. 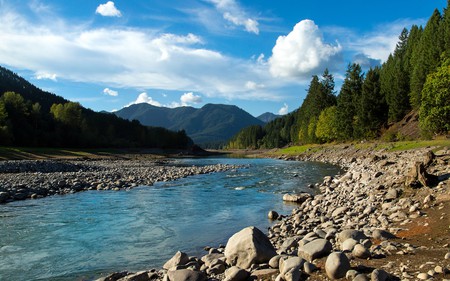 This 33-mile-long (53.1-kilometer-long) river is nestled within the peaks of the Cascade Range, draining the southwestern portion of nearby Mount Hood. The Salmon River, surrounded by rows of pine, roaming elk, and crisp Oregon air, is a protected National Wild and Scenic River from its headwaters on Mount Hood to its junction with the Sandy River. 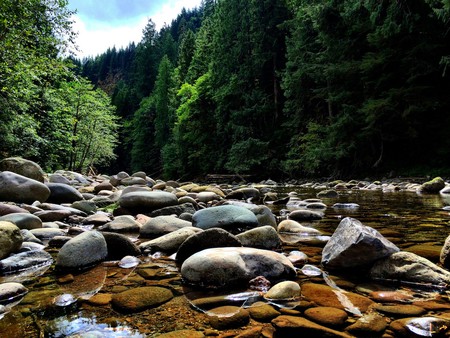 My Public Lands Roadtrip: Counting Fish in the Salmon River in Oregon | © Bureau of Land Management/Flickr 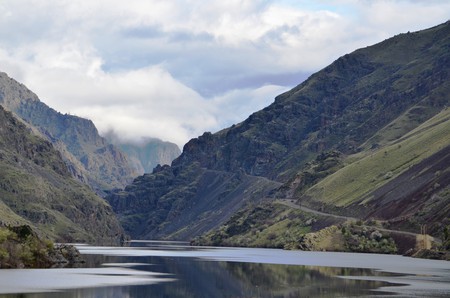 A popular stop for fishing, camping, rafting, and kayaking, McKenzie River flows for 90 miles (144.8 kilometers) through the Cascade Range as it moves westward to the Willamette Valley. The McKenzie River National Recreation Trail follows the banks of the river for over 25 miles (40.2 kilometers); watch for bald eagles, osprey, dippers, and mergansers along this Willamette River tributary. 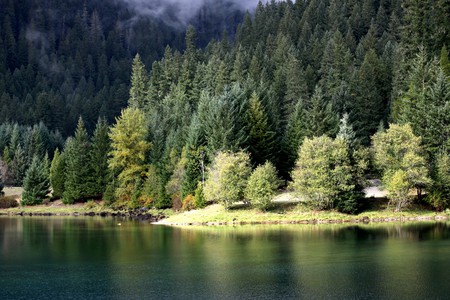 The Columbia River – wedged between the canyons of the Columbia River Gorge – is the largest river in the Pacific Northwest. It rises in the Rocky Mountains of British Columbia, Canada, traveling for over 1,200 miles through Washington and Oregon before emptying into the Pacific Ocean. The Gorge is the largest National Scenic Area in America and one of the Seven Wonders of Oregon, with views of the Cascade Mountains and waterfalls to the south and Washington cliffs to the north. 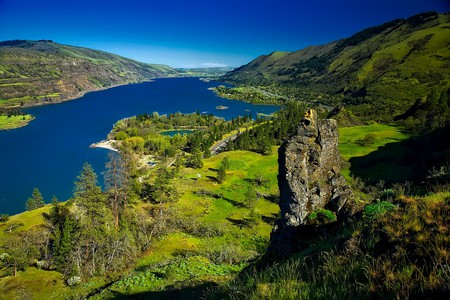 The John Day River is the longest free-flowing river in Oregon, and one of the longest in the U.S. A tributary of the Columbia River, John Day runs for 284 miles (457 kilometers) with its elevation ranging from 265 feet to 9,000 feet (80.7-2743.2 meters). Portions of the river are designated National Wild and Scenic, with the river offering diverse geological features – monoliths, buttes, and ancient red and green soils – and abundant wildlife. The river is known for its Chinook salmon, steelhead, and bass fishing, hiking, hunting, whitewater rafting, and a plethora of other recreational opportunities. 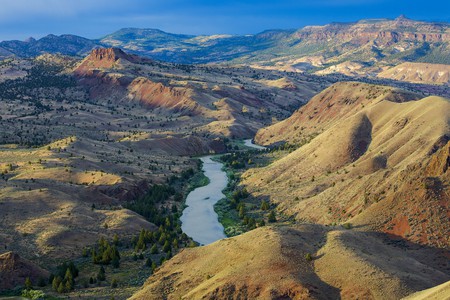 The Deschutes River, a National Wild and Scenic River, flows for 175 miles (281.6 kilometers) through ruggedly beautiful landscapes. The Upper portion is filled with trout and offers views of the Newberry National Volcanic Monument; the Middle, a popular hiking destination, is known for its remarkable geologic formations and waterfalls; and the Lower is a whitewater rafting and premier fishing hot spot. 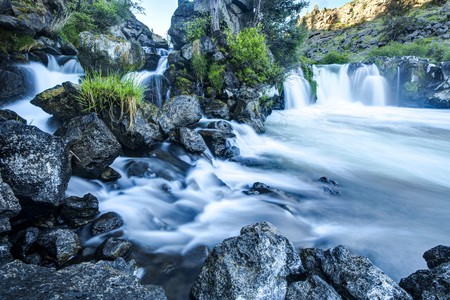 Marked by steep canyons and the towering walls of the Owyhee Plateau, this National Wild and Scenic River is a popular hiking and whitewater rafting destination. The canyon rims are home to deer, bighorn sheep, mountain lions, bobcats, and several species of raptors. A tributary of the colossal Snake River, the Owyhee runs for 346 miles (556.8 kilometers) before entering the Snake River Plain near the Oregon-Idaho state line. 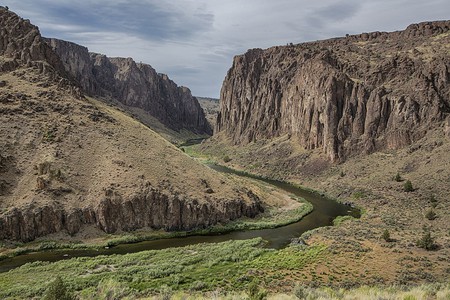 The Europeans, in 1838, were the first to cross the Sandy River, using a Native American trail to drive cattle from the Willamette Valley to Wascopam; the trail was later frequented by other pioneers to drive livestock over the mountains. Rising from the Reid Glacier on Mount Hood, Sandy River flows for 57 miles (91.7 kilometers) through Clackamas and Multnomah Counties before joining the Columbia River. The always stunning backdrop boasts views of the Mount Hood Wilderness and National Forest, Zigzag Mountain, Old Maid Flat, and the majestic, snow-capped Mount Hood. 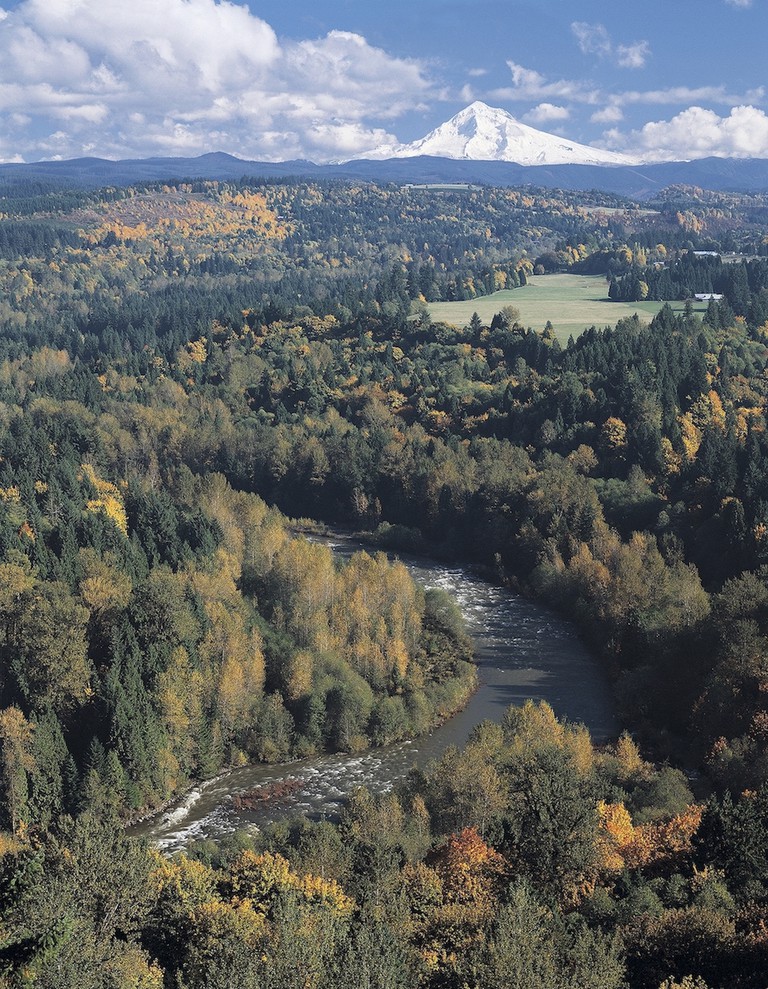 The North Umpqua River is considered to be one of Oregon’s most beautiful rivers; with its crystal clear waters traversing through lush forests and mountainous landscapes, it’s hard to disagree. A renowned fly-fishing and whitewater rafting waterway, this National Wild and Scenic River draws hundreds of visitors annually with its allure and recreational opportunities. 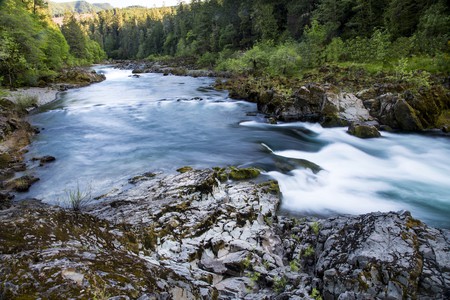 Named for its deeply blue waters, this river in the Willamette National Forest defines all that is Oregon beauty. Expect wide-open vistas of Blue River as its aqua-marine waters travel through rows of Douglas fir-lined mountains. The river is 17 miles (27.3 kilometers) long, joining with the McKenzie River near the town of Blue River. 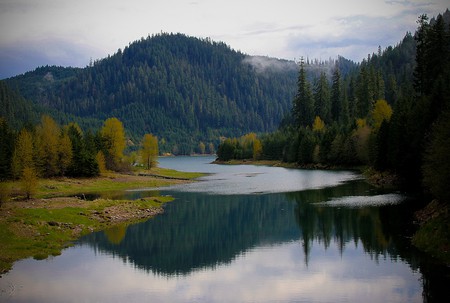 It comes as no surprise that Chetco River is a designated National Wild and Scenic River: tropical-like turquoise waters, steep mountainous terrain, and boulder-strewn falls can be seen along its 44-mile (70.8-kilometer) designated segment, backed by views of the Kalmiopsis Wilderness. For the remaining 55 miles (88.5 kilometers), the Chetco descends from its 3,700-foot (1127.7-meter) elevation to sea level as it prepares to empty into the Pacific Ocean. The river is recognized for its pristine water quality and is a destination for a myriad of recreational activities. 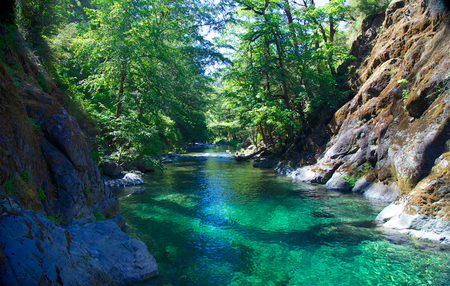 Rising in the mountains of the Tillamook State Forest, the Wilson River flows for 33 miles (53.1 kilometers), merging with its North Fork before entering Tillamook Bay. Locals claim this waterway is one of the best fishing spots for steelhead and Chinook salmon in the state. 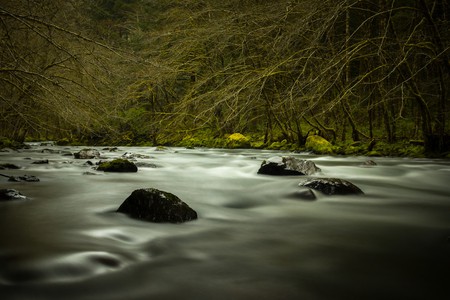 One million years ago, the Owyhee Mountains separated the Snake River from the Columbia River, creating a lake in present-day Idaho. The river finally pushed through the mountains, rushing northward and cutting through the volcanic rock that borders it today. The canyon that resulted is 10 miles (16 kilometers) across, with surrounding walls steep and enormous – some reach an average height of 5,500 feet (1676.4 meters) above the river, with Seven Devils the tallest at 9,393 feet (2863 meters) high. They create the deepest gorge in the U.S. The Oregon portion winds through Hells Canyon before entering the Columbia River. At a whopping 1,078 miles (1734.8 kilometers) long, Snake River is nothing but wild and scenic. 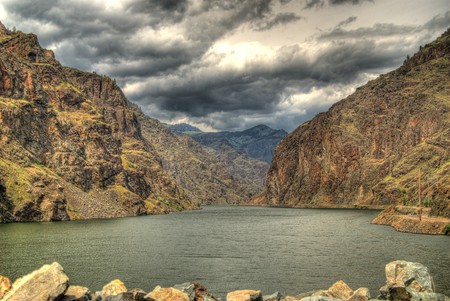 A designated National Wild and Scenic River, the Klamath‘s mesmerizing deep blue waters move swiftly from Oregon’s high desert through the towering peaks of the Cascade Range and Klamath Mountains before entering the Pacific Ocean in California. Wildlife and fish are abundant, which made this river a popular location for several Native American tribes and early European settlers. The changing vegetation of pine, sage, and juniper along its corridor make for peaceful scenery amongst its powerful rapids. 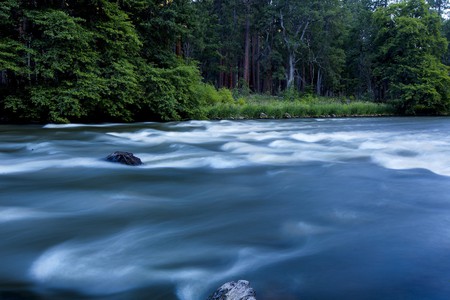