Modern American painter Richard Diebenkorn explored the boundaries of abstract expressionism as well as those of figurative painting during the 20th century, an idea that was new at the time. His artwork evolved into a form that intertwined the two styles, creating one that displayed a sense of balance between planes and surfaces, an arrangement of bright colors and an illusionist depth of lyrical abstractions. 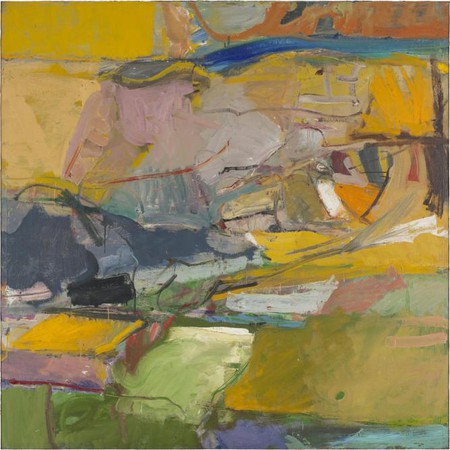 Richard Diebenkorn’s interest in art first sparked at the sight of works illustrated by Howard Pyle and N. C. Wyeth. From then on, Diebenkorn dedicated his time to painting and drawing. Though his father strongly disapproved of his decision to major in art history, Diebenkorn chose to pursue his studies in art at Stanford University. As soon as he entered the university in 1940, he underwent art training with his professor and mentor, Daniel Mendelowitz. Mendelowitz introduced Diebenkorn to series of artworks by American artists including, but not limited to, Arthur Dove, Charles Sheeler and Edward Hopper, whose artistic style inspired Diebenkorn to include similar features in his own work. 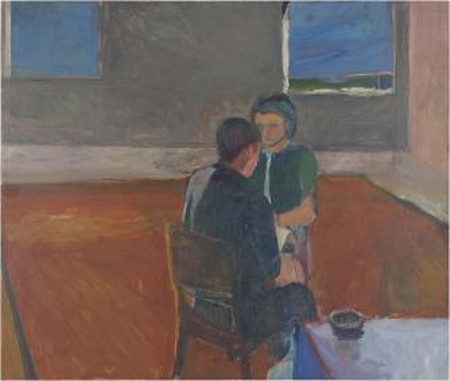 Man and Woman Seated | Courtesy The Estate of Richard Diebenkorn

In 1943, Diebenkorn took a temporary break from his studies to serve in the military, mandatory in America at the time. He joined the Marine Corps and relocated to Quantico, Virginia, where he served for two years. During this period, he traveled to Washington, DC to visit the Phillips Collection where he saw works of renowned modern artists such as Pierre Bonnard, Pablo Picasso, and Henri Matisse, whose influence significantly contributed to Diebenkorn’s artistic development. Diebenkorn admired Matisse’s images that included both indoor as well as outdoor space with balanced coordination of the planes with the borders of the canvas. As a result, he incorporated some of Matisse’s techniques into his paintings.

After completing his military service, Diebenkorn used the GI Bill to pursue a master’s degree at the University of New Mexico, where he began his artistic debut in abstract expressionism through the usage of large-scale oil paintings and experimental works in a sketchbook. His early works in the 1950s consisted of a series of sophisticated planes that outlined roads and ravines across terrains, combining ‘landscape influence, aerial perspective, and a private, calligraphic language, into an artistic style that flowered in myriad directions.’ While New York artists played a big role in his direction, Diebenkorn was also inspired to incorporate both aerial and ground views into his work by nature, in particular the colors of the sky, and the rectilinear fields of New Mexico’s landscape.

During the 1950s and 1960s, Diebenkorn’s method of painting and drawing shifted to a more florid style as he began to experiment with figure studies and still life painting. Still including figurative and landscape images, the artist incorporated a calligraphic form of art into the landscape, giving rise to the term ‘abstract landscape,’ as described by Life magazine in 1954. Many of his works from his Berkeley collection portrayed flat landscapes consisting of a smooth yet skeletal grid with an empty space in the center where he placed a solitary figure. Additionally, Diebenkorn fused unusual colors, including different shades of blue, greens and yellows, which were derived from the landscape of California. 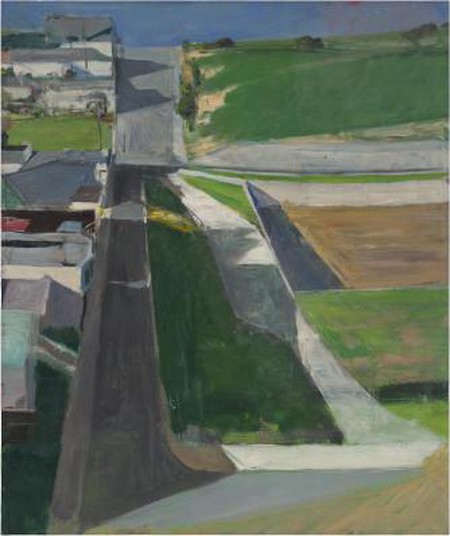 Cityscape I | Courtesy The Estate of Richard Diebenkorn

Diebenkorn’s art technique deviated from the concept of abstract expressionism even further in 1965 to explore a more figurative form of art, one that exhibited moderately flat, planar fields of color, balance in geometric shapes, and smaller space of craft. His transfer from abstract art to figurative art became known, especially throughout the Northern California region, and led, alongside with other works from artists such as David Park, Elmer Bischoff, Wayne Thiebaud, and Robert Qualters, to the development of the Bay Area Figurative Movement, which marked a transition from abstract painting to a more figurative representation of art in the San Francisco area.

Diebenkorn’s paintings, particularly the painting ‘Cityscape I,’ demonstrated that even abstract style of painting could coexist with pictorial work, though generally they were considered completely separate and independent. In ‘Cityscape I’ the dense and intricate planes of the buildings as well as the expansive and open planes of the landscape are structured vertically, affirming that the surface is flat even with an abstract layout. As a whole, the painting is definitively a cityscape; however, when the audience visually removes a rectangular section of the painting, there appears a miniature abstract painting. Diebenkorn embedded a similar concept when painting sole figures. When drawing people, he portrayed the individual within abstract surface design in the center of an abstract setting. 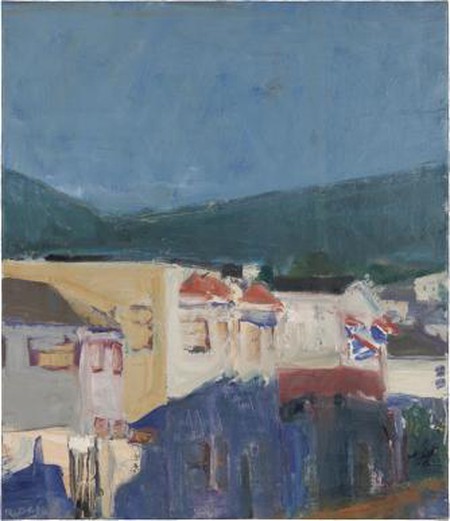 Though Diebenkorn became famous for his figurative works, he returned to abstract expressionism after moving from San Francisco to Los Angeles to teach at the University of California at Los Angeles in 1966. He continued to demonstrate a balance between the use of abstract and figurative elements. However, during this period, he eliminated the figure while retaining allusions to the landscape and distinguishing aligned and realigned geometric scaffolding paved with vivid colors. Diebenkorn painted a myriad of abstract art in this manner, 140 of which were part of the Ocean Park series, which was named after the area in Santa Monica where he kept a studio.

Although it seemed that he had successfully established a balance between abstract and figural components in his works, Diebenkorn continued to struggle profoundly with the balance of structure, proportion, spatial illusion, variations of color as well as planes and lines, as seen throughout his Ocean Park collection. In hopes of overcoming this trial, the artist continued to explore new forms of abstract art, experimenting with paintings that were richer in colour and more compositionally difficult. He even temporarily changed his contents to those of clubs and spades on paper during the early 1980s.

For his last stretch of life before his death, Diebenkorn moved from Santa Monica to Healdsburg, California in 1988 to complete his works in abstract fashion. He worked on a small-scales, producing unconventionally decorative, authentic paintings, potentially one of the best works in his life. Furthermore, he attempted to produce art using print series that displayed variations of a coat hanger as a final attempt to perfect and complete his artistic journey. His latest etchings portrayed a visual book of poems published by San Francisco’s Arion Press and written by W.B. Yeats, while constructing a parting gesture to the viewer.

As a painter who moved back and forth between abstract and figural paintings throughout his career, Richard Diebenkorn was not necessarily a revolutionary artist, but a tremendous contributor to the evolution of art through his version of abstract expressionism. His innovation assisted with the development of the more revolutionary art movements officially led by New York artists, such as Jackson Pollock and Willem de Kooning. To this day, Diebenkorn is admired for his persistence and continuous exploration of new forms of art, and his work is still used for study by art students around the world. Some of his famous works can be seen at a current exhibition called The Bay Area and Beyond: Selections from the Museum’s Collection. The exhibition is held at the Cantor Arts Center in Stanford, CA, at Stanford University, and the display of Diebenkorn’s as well as other artists’ works opened on 13 August 2014 and will remain open until 26 October 2014.