Amidst all the talk of the foodie, beer, and coffee culture, you might forget that Portland, Oregon happens to be a treasure trove of historical landmarks and standout architecture. Second only to Chicago in the highest number of LEED-accredited “green” buildings, the city is a leader in sustainable design and home to a variety of impressive architectural styles—many of which are visible among Portland’s most significant structures.

Marking the center of Downtown Portland, the Pioneer Courthouse is the oldest federal building in the region (and the second oldest west of the Mississippi). Declared a National Historic Landmark in 1977, the structure features an Italianate design, as was in fashion for many West Coast government buildings of the time. Just opposite, Pioneer Courthouse Square is known as Portland’s “Living Room” and occupies a whole city block, hosting a range of events and great opportunities for people-watching. 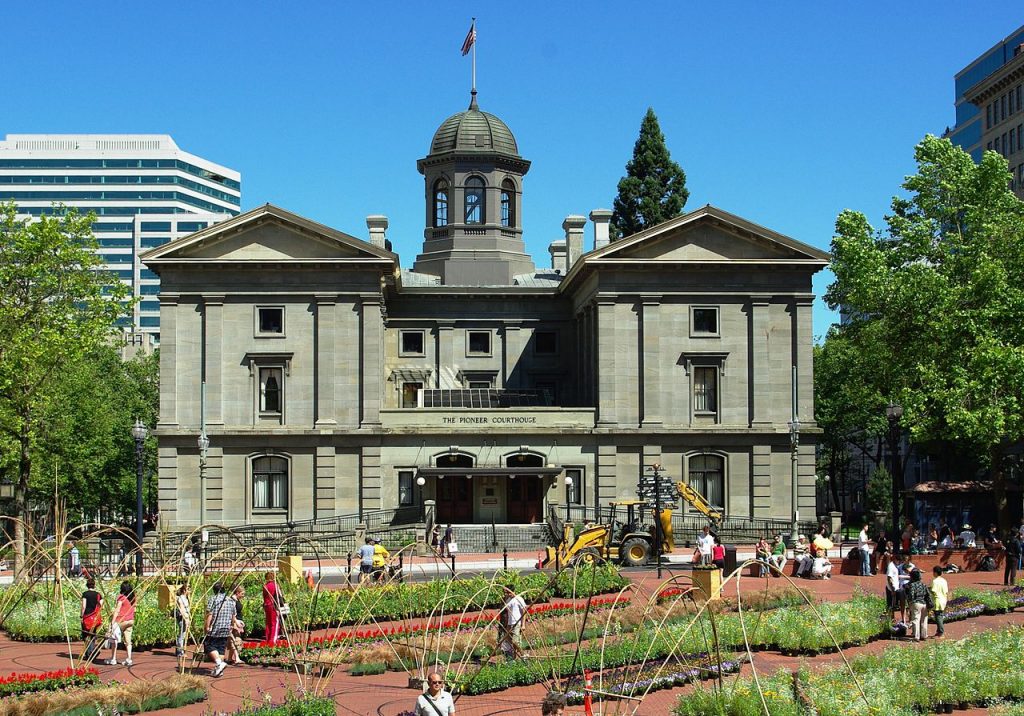 Across Yamhill Street sits the former Oregon Journal Building, renamed Jackson Tower in 1951 to honor the defunct newspaper’s founder, Charles Samuel Jackson. At dusk, the Beaux-Arts building’s 1,800 light bulbs light up, setting the top and bottom of its façade aglow—especially lovely at Christmastime alongside the square’s brightly lit tree. 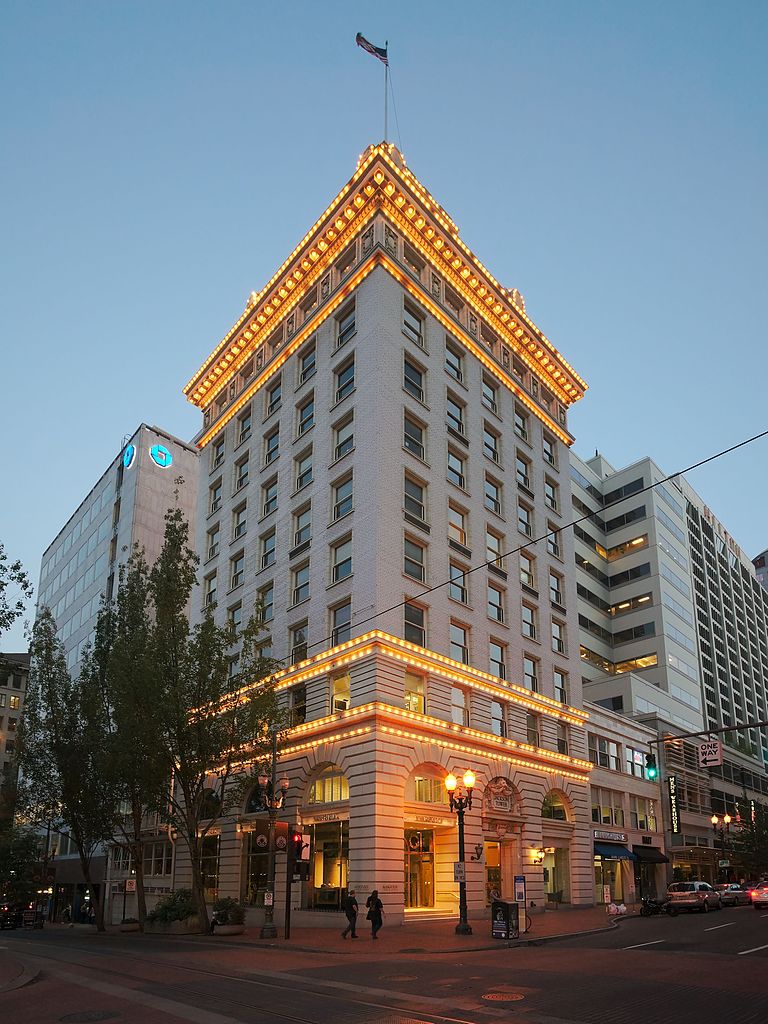 Not to be confused with its similar-sounding neighbor, the U.S. Bancorp Tower, the U.S. National Bank Building is noteworthy for its Roman classical style, put forth by renowned Portland architect A. E. Doyle. A century after its opening in 1917, the structure continues to house U.S. Bank’s main Portland branch and has almost entirely maintained its original condition. 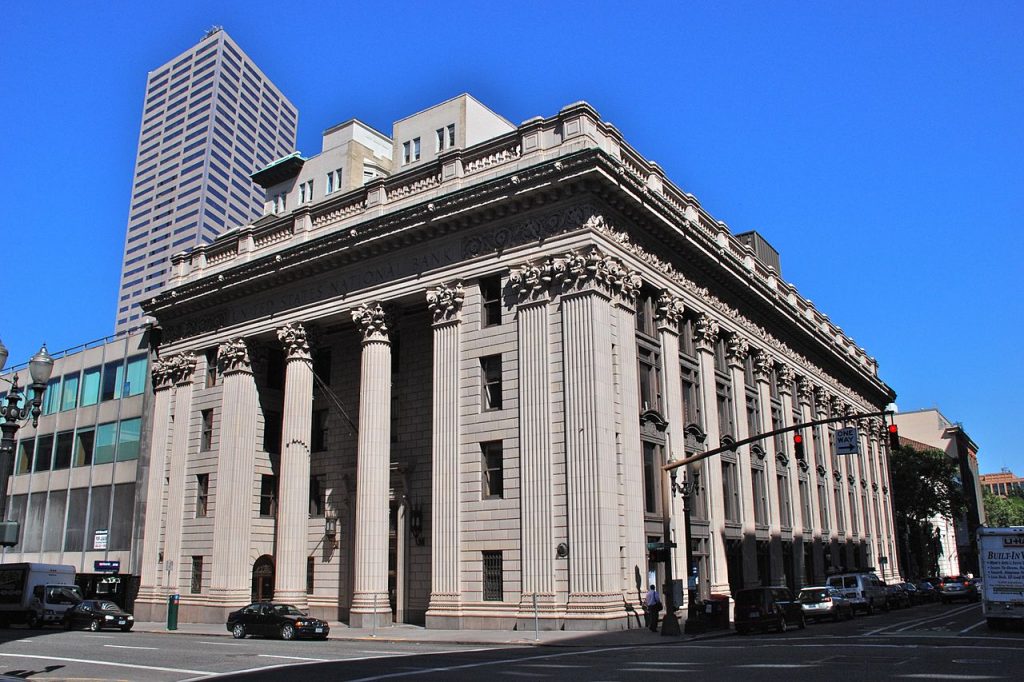 Another architectural gem designed by Doyle, but in the Georgian style, the Multnomah County Public Library system’s main branch, built in 1913, was one of the first libraries in the country to feature an open-plan interior. The 1990s saw a major renovation to the interior, optimizing the space and reinforcing structural soundness. 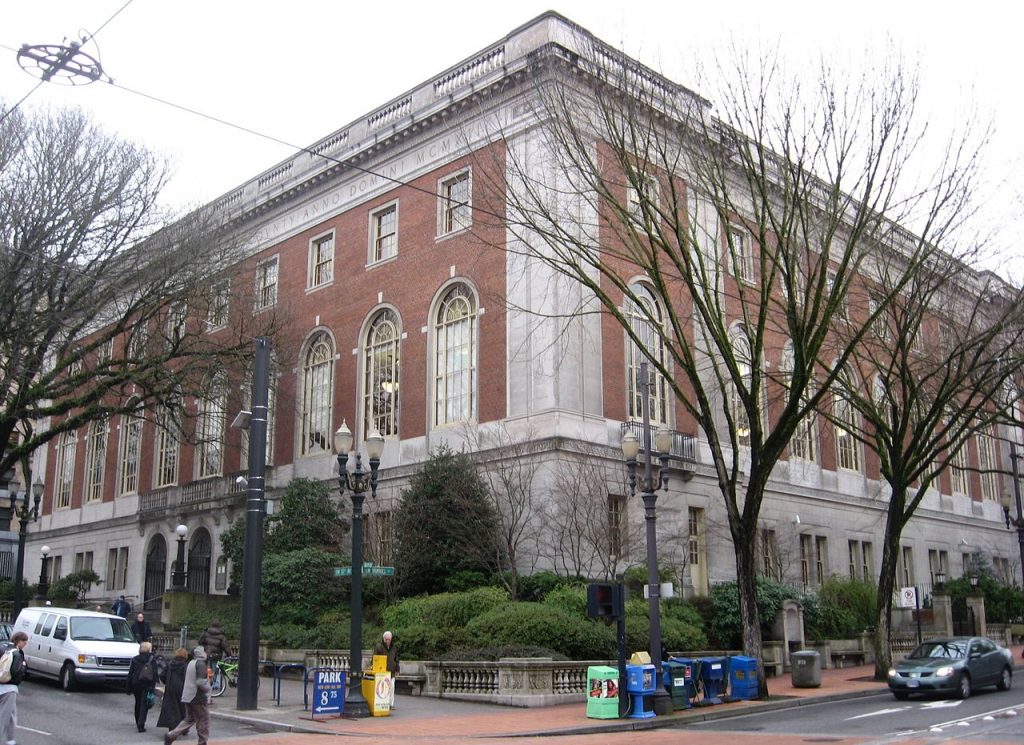 Portland’s Italian Renaissance-style City Hall, built in 1895, was one of the first large constructions in the Pacific Northwest to feature amenities such as centralized heating, electric wiring, and public elevators. Over the years, the building, taking up an entire city block, has housed various city offices and departments and even the Portland Public Library for a time at the turn of the 20th century. The structure’s grounds are beautiful, adorned with rose and vegetable gardens, trees, and other flora.

A movie theater so iconic that an entire Portland neighborhood was named for it, the Hollywood sits in the city’s Northeast. The theater, which opened in 1926 as a vaudeville house and silent movie theater, has its original ornate façade, offering a stunning and unusual example of Rococo architecture in America. 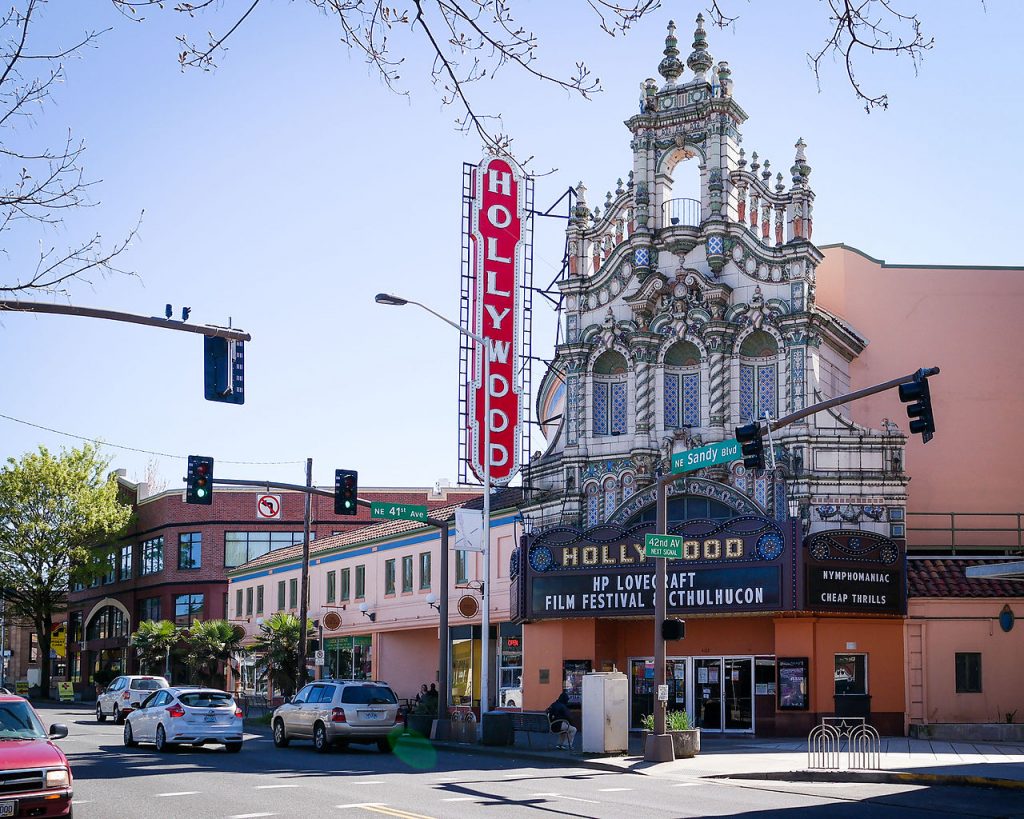 One of the most important early modernist Portland homes, the Aubry Watzek House was designed by a 27-year-old architect named John Yeon and is now part of the University of Oregon’s John Yeon Center for Architecture. Named for a lumber baron who lived there upon its completion, the structure’s architectural merits were praised early on, earning Yeon national acclaim and even helping define Modernist architecture in America. 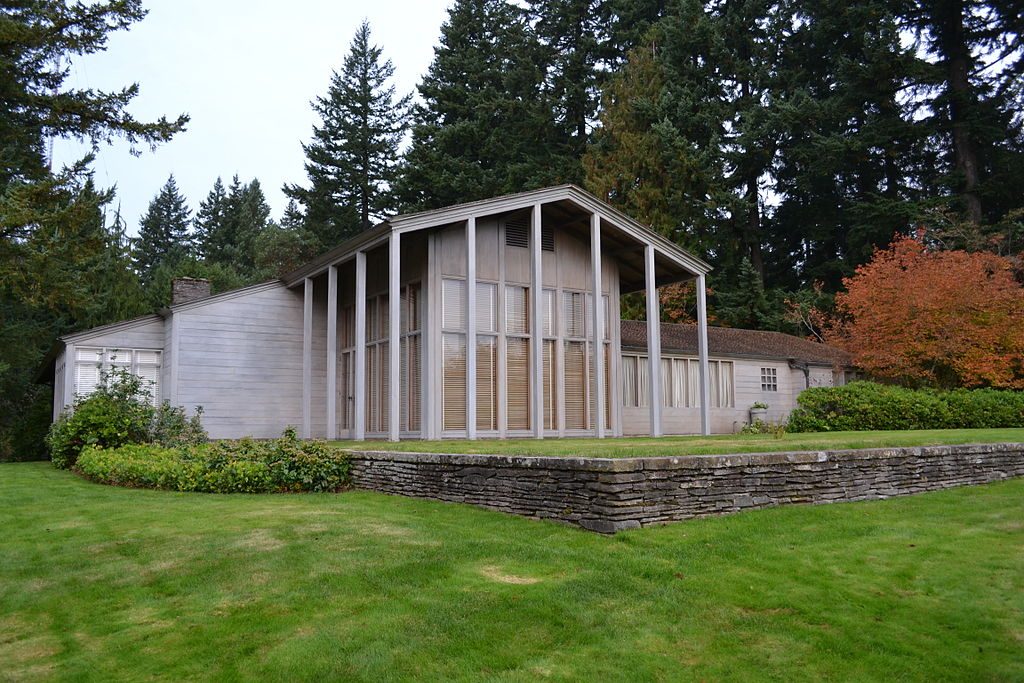 The 15-story glazed white terra cotta Meier and Frank Building is another one that takes up a whole city block, just across from the Pioneer Courthouse. The structure, built in an Early Commerical architectural style reminiscent of yesteryear’s glamorous department stores, was originally the headquarters and flagship location of the Meier & Frank chain. Today, a Danish wind turbine manufacturer owns it. 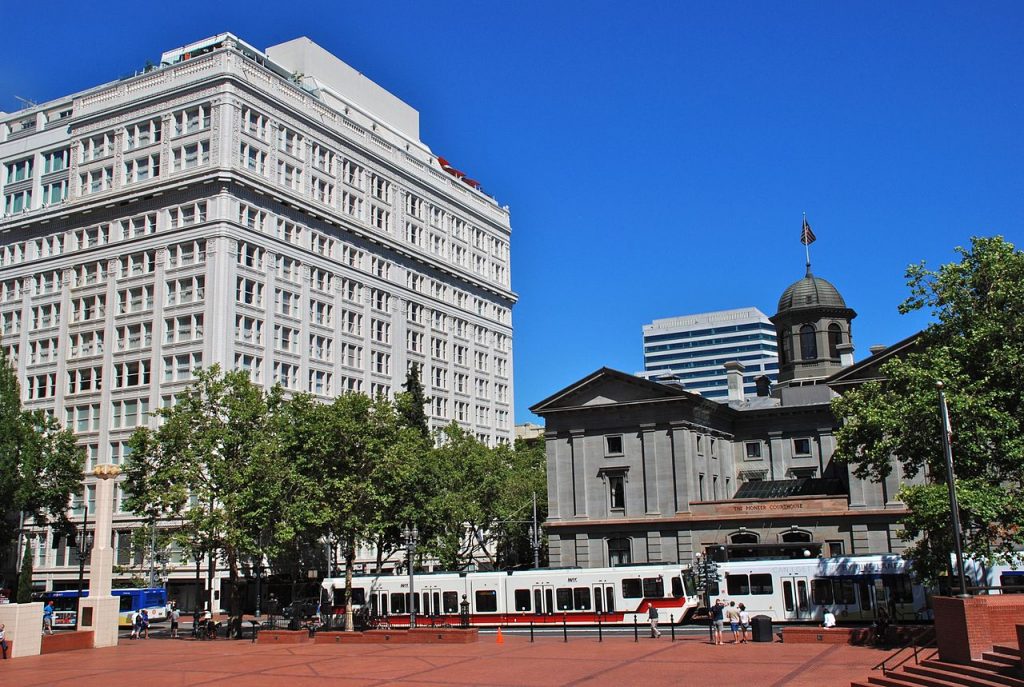 Originally called Cotillion Hall, Portland’s Crystal Ballroom opened its doors in 1914 and welcomed crowds to its dance hall and revivals through the Great Depression. Since the ‘60s, it’s also set the scene for various high-profile concerts and shows, as well as literary events and other happenings. Legends from James Brown and Marvin Gaye to the Grateful Dead have graced the Crystal Ballroom’s stage, and you can still see live music there today. 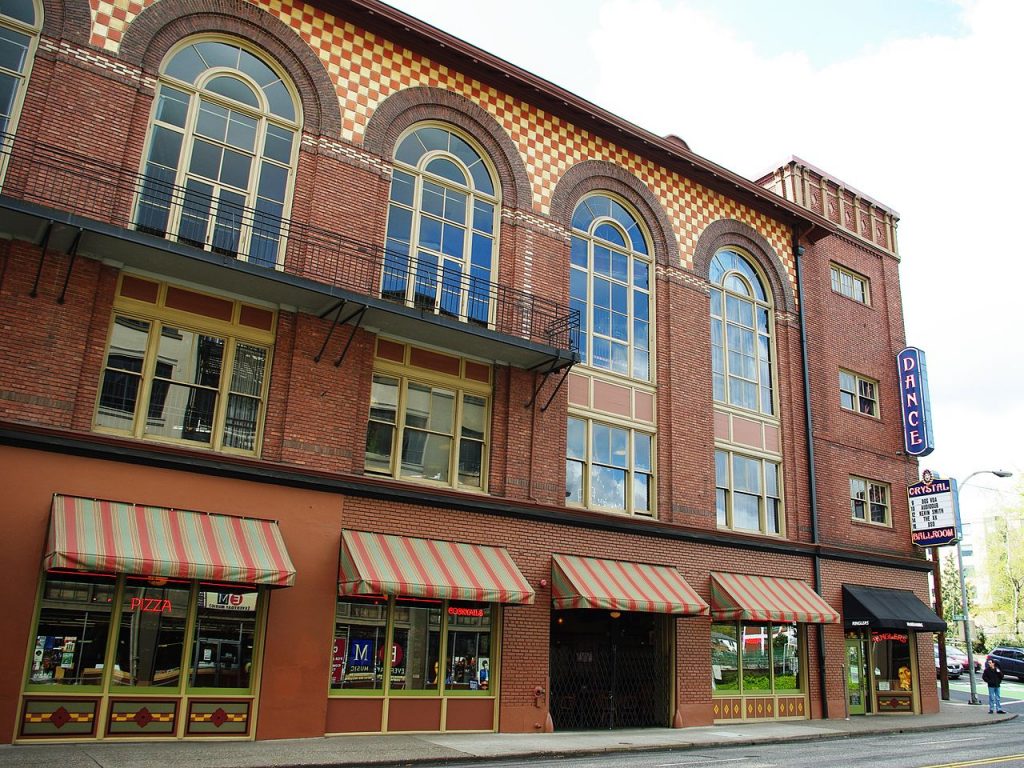 Portland’s Calvary Presbyterian Church—also known simply as the Old Church—was built in 1882 in the Carpenter Gothic style and designed by local architect Warren Heywood Williams. The wood used in the construction, which mimics the look of more traditional stone gothic churches, makes the structure much better suited for its Pacific Northwest setting. Today, the Old Church is a nonprofit committed to its restoration and preservation and offers cultural and artistic programming to the public. 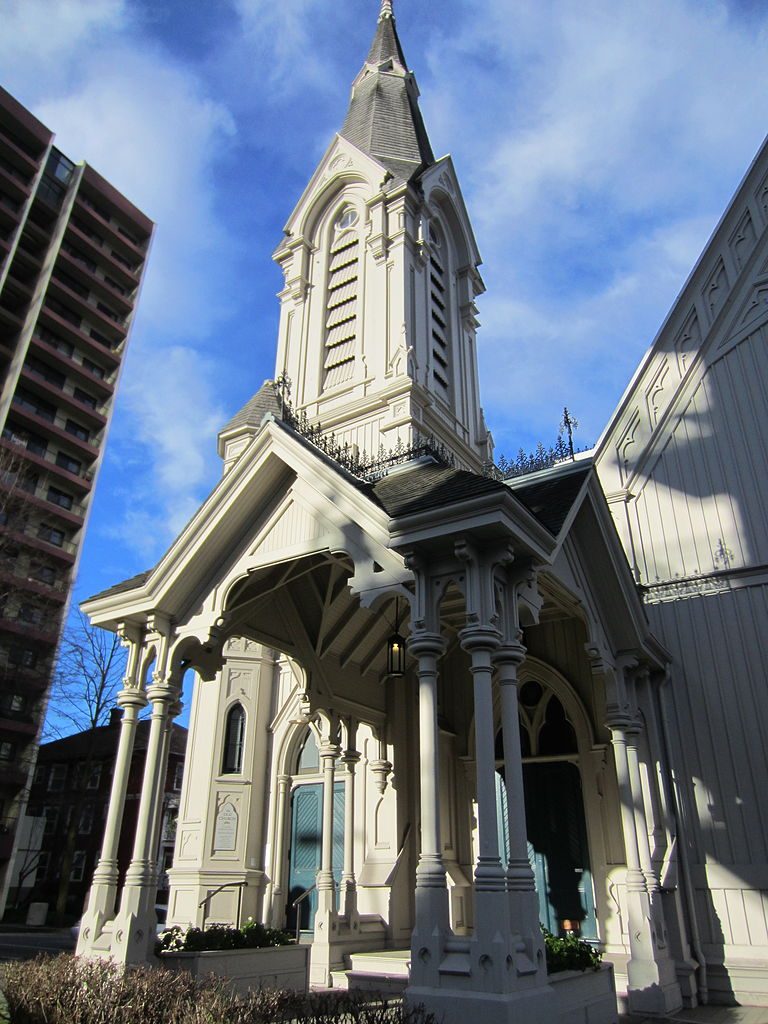