A History Behind Belmont's Displaced Goats 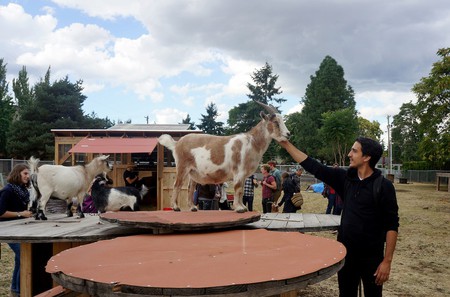 14 goats and a hen graze in an undeveloped lot on SE 92nd & Harold in Belmont. They have wooden structures to shelter them from the rain and an abundance of food and water. It’s clear these animals are taken care of, but why are they living in the middle of Portland?

In 2010, landscape architect Brett Milligan made a suggestion to developer Killian Pacific: rent herds of goats to clear the brush from two city blocks bounded by SE Belmont and Taylor Streets and SE 11th and 10th Avenues. Although the proposal was logical, Milligan had a secret agenda. He wanted to see what residents would think of goats living in an urban, partially industrial neighborhood. The community embraced its new neighbors, dubbing the area “Goat Field.”

Three years after Milligan’s social experiment began, Creative Woodworking NW—a shop across the street from Goat Field that helped care for the rented herd—arranged to have its own goats. Only, these goats weren’t going to be hired—they were going to be permanent residents.

After a year of relaxing, grass-munching bliss, a long-anticipated development project’s impending deadline threatened Goat Field, and the possibility of splitting up the herd was real. Thankfully, volunteer caretakers in Portland stepped up and purchased the herd, ensuring it would stay intact. The only problem was, they needed to find a new home.

The new owners started a non-profit called The Belmont Goats. This honored the herd’s original stomping grounds, and in late 2014, crowdfunded enough money to move the urban grazers where they reside today, thanks to the Lents neighborhood‘s gracious invitation.

Unfortunately, Chester, Lefty, Carl, Phil, Bailey, Duchess, Dusty, Hickory, Bambi, Cooper, Clover, Precious, Atho, and Winter are in search of a new home once again, as they’ll need to relocate in June 2018. But they shouldn’t have any problem relocating. After becoming part of Portland’s community nearly a decade ago, any neighborhood would be happy to welcome The Belmont Goats as their neighbors.