6 Musicians You Didn't Know Were From Oregon 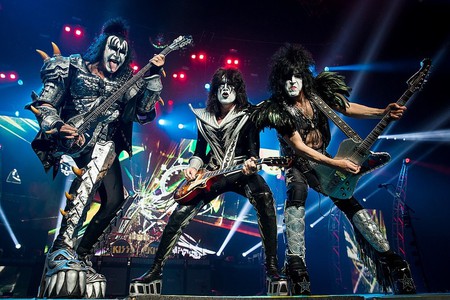 Oregon, and Portland in particular, has recently proved a hotbed for music. Alt-pop darlings Portugal. The Man call the City of Roses home and indie giants Modest Mouse moved down south from Washington to become full-time residents. But, there is some big name-talent born and raised in the Beaver State.

Any fan of Everclear, The Decemberists or The Dandy Warhols probably knew those bands were proud Oregonians, but you may not have known these six famous musicians and bands also call Oregon home, and always have.

Esperanza Spalding is Portland’s resident jazz prodigy. At the age of five, the musician played violin with the Chamber Music Society of Oregon and later taught herself how to play guitar and bass. In 2011, the neo-soul singer won her first Grammy, becoming the only jazz artist to win in the Best New Artist category. She has since racked up four more prestigious golden gramophones for her breakout 2013 album Radio Music Society and select vocal tracks.

M. Ward is best known for his work with everyone’s favorite quirky actress, Zooey Deschanel. The duo released six studio albums as She & Him, including two holiday records and a collection of classics. However, the musician born Matthew Stephen Ward is familiar in the Portland music scene, and was familiar long before teaming up with Deschanel in 2008. The indie-folk artist has made music as M. Ward since 1999 and has nine solo albums under his belt.

Aminé is helping put Portland’s hip-hop scene on the map. Though most rap music coming out of the City of Roses is underground, the 23-year-old emcee is paving the way for future generations. Aminé has been making music since 2014 and broke into the mainstream in 2016 with the release of his hit single, “Caroline”. The track surged to the No. 11 spot on the Billboard Hot 100 chart and by June 2017 was certified three-times platinum by the RIAA.

Tommy Thayer’s name may not sound familiar to you upon first glance, but when you see him donning The Spaceman makeup while shredding onstage, you know exactly who he is: the lead guitarist of KISS. The Beaverton, Oregon native played in a handful of bands before landing a permanent spot in the heavy metal gods’ lineup in 2002 (he actually started working with the band in 1989, doing odd jobs and production tasks) and has been an integral part of the band ever since.

Brad Wilk is another name you may not know off the top of your head, but you’ll know his accolades. The Portland-born activist and drummer is best known for co-founding Rage Against The Machine with Tom Morello and Zack de la Rocha in 1991, after relocating to Southern California. Upon the band’s breakup in 2000, Wilk, Morello and RATM bassist Tim Commerford teamed up with Soundgarden’s Chris Cornell to form Audioslave. The rock supergroup had seven good years before dismantling in 2007. Currently, Wilk, Morello and Commerford perform as Prophets of Rage, alongside Chuck D, B-Real and DJ Lord.

Sure, Portland’s burgeoning music scene may seem somewhat new, but The Kingsmen started paving the way in 1959. The beat/garage rock band is most famous for its 1963 rendition of Richard Berry’s “Louie Louie,” which held the No. 2 spot on the Billboard charts for six weeks and became an enduring classic.