Why This Cleveland Lighthouse Is Frozen 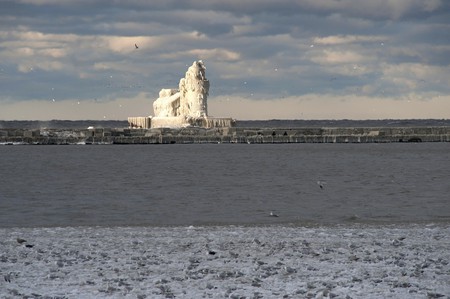 Each winter, the West Pierhead Lighthouse in Cleveland, Ohio, is frozen over in awe-inspiring layers. Fully encrusted with ice, the lighthouse makes for a quirky sightseeing trip or a phenomenal winter photo shoot.

In 2010, local Cleveland news stations began reporting on a gorgeous natural phenomenon: an ice sculpture rising from the waters of Lake Erie. But this wasn’t a work of art—it was a lighthouse encased entirely in ice, looking like a frosty castle straight out of Frozen. Stunning and ethereal, the lighthouse quickly became a favorite site for photographers and locals who admired the haunting, beautiful collision between a man-made building and one of the Great Lakes.

So, how did this naturally occurring ice sculpture come to be? The West Pierhead Lighthouse, located at the west end of Cleveland’s Port Harbor, nudges up so closely against Lake Erie’s cold waters that it was repeatedly splashed by ice caps caused by gale force winds. The waves crossed the breakwall, and during that particularly freezing winter, it froze over the lighthouse in layers amid subzero air temperatures. Visitors from Ohio and nearby states flocked to the lighthouse to enjoy the unusual sight, while mariners struggled to see the lighthouse’s flashing beacon.

Since 2010, the phenomenon has occurred at the West Pierhead Lighthouse annually during the colder months. Each year, the layers get thicker as the lighthouse is sprayed with more and more ice-cold water from the harbor. The lighthouse’s encasement in ice makes for a picture-perfect wintry scene.

Tourists and locals view the lighthouse (which many say resembles a fairy castle or wedding cake, with its ornate icicles and elaborate layers) from nearby Wendy Park, a 22-acre public park in downtown Cleveland, or from Lake Erie’s cruise boats that depart from the downtown harbor. Professional photographers, in particular, often make the trek during the holiday months to catch a glimpse of the highly sought-after frozen dreamscape.

The Cleveland Harbor West Pierhead Lighthouse had already made local history once before. The lighthouse, built in 1911, was manually operated by a lighthouse keeper for decades before becoming automated in 1965. Its original Fresnel lens is on display at the Great Lakes Science Center in downtown Cleveland, but the lighthouse is still in use. Its beacon flashes every five seconds to guide boaters to their destinations—that is when it isn’t frozen over!