What Is the Soap Box Derby? 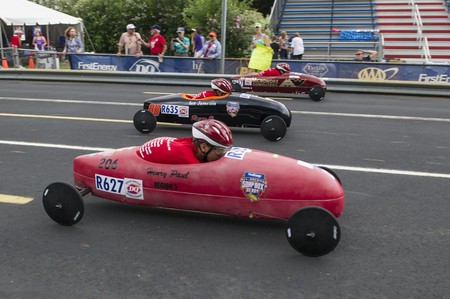 In 1933, an Ohio newspaper photographer witnessed something while on assignment. Myron Scott of the Dayton Daily News came across a group of boys racing homemade cars. He was so enthralled by the idea that he acquired the copyright for Soap Box Derby and began searching for a sponsor to help put on a national racing competition.

The first All-American Soap Box Derby was held the following year in Dayton, Ohio. Bob Turner, 11, of Muncie, Indiana, won the inaugural event. The competition was moved to Akron in 1935, raced down Tallmadge Avenue Hill, because of its central location and hilly terrain. The competition is now held specifically at Derby Downs, built in 1936.

What is the Soap Box Derby?

As an international non-profit organization whose mission is to build knowledge and character, while creating a meaningful experience through collaboration, and honest and fair competition, The Soap Box Derby hosts events year-round in an effort to continue education through S.T.E.M. programs (science, technology, engineering, mathematics).

Participants race homemade cars without engines, utilizing gravity in order to speed downhill faster than their opponents. There are official plans and certain parts permitted when building a Stock Car, Super Stock Car or Masters Car depending on age group. Cars are inspected all the time to deter participants from cheating. In 1973, champion Jimmy Gronen of Boulder, Colorado, was disqualified after an electromagnet was found in his car.

How can participants qualify?

Local race program—Win a local AASBD-licensed race near your residence to earn the title of “Local Champion” and entry into the World Championship against fellow Local Champions.

Rally program—Participants earn points through various AASBD-licensed rally races throughout the United States and Canada. Earn enough points to win a “Rally Regional Title.” Winners of these titles are considered a “Rally Champion” and earn the right to race fellow Rally Champions at the World Championship.

International program—Countries outside of the United States are able to host AASBD-licensed races. Winners of these international races are considered a “Local Champion” and are eligible to competed in the World Championship against other Local Champions.

The 2017 All-American Soap Box Derby is July 16-22 at Derby Downs in Akron, Ohio. More than 425 boys and girls from around the United States, Canada, Japan and New Zealand will compete. Winners of the three divisions will split $36,000 worth of college scholarships.