What Cleveland’s Sidaway Bridge Teaches Us 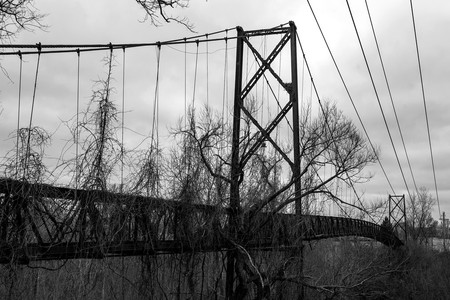 Cleveland’s first and only suspension bridge, over a ravine known as Kingsbury Run, appears at first glance to be nothing more than a run-down piece of architecture. In reality, Sidaway Bridge is a reminder of Cleveland’s long, storied history of racial diversity, tension, and inequality.

Sidaway Bridge, the first suspension-style bridge in Cleveland, Ohio, was constructed in 1931. At 680 feet (207 meters) long, it was meant to serve as a footbridge for pedestrians.

Its predecessor was the longest wooden bridge in Cleveland’s history, connecting a neighborhood of primarily Hungarian immigrants living along Kinsman Road on one side and the Jackowo Polish neighborhood on the other. Built in 1909, it was a familiar stop for revelers heading to Dahler’s, a local bar. It allowed easy access to both neighborhoods, and travelers crossed it freely.

My dad keeps talking about the renovations they're talking about for the Sidaway Bridge and surrounding area and it reminded me of my time checking out Sidaway. What a fun adventure! #flashback #throwback #Sidawaybridge #bridge #abandoned #Cleveland #thisiscle #adventuring #nature #Sunbeam #naturephotography

Sidaway Bridge was later built in the old bridge’s place in order to connect the two neighborhoods while allowing for easier railroad construction through the area. In the subsequent decades, the demographics of the Kinsman Road neighborhood shifted due to government-funded revitalization efforts that allowed for the development of Garden Valley, a housing project that sprawled across 130 acres in the area. The housing project, headed by the Cuyahoga Metropolitan Housing Authority, was occupied primarily by African-American tenants.

Tensions between Slavic Village and residents of Garden Valley came to a head during the fight for civil rights and desegregation. The Hough Riots erupted in July 1966 as a result of extreme, widespread poverty, neglect by area slumlords, and police brutality against black Clevelanders. The riots resulted in four deaths of African-American citizens, over 50 injuries, and hundreds of arrests. 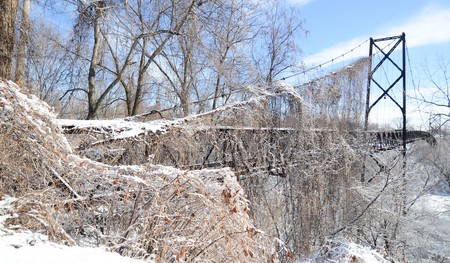 Sidaway Bridge, too, became collateral damage, as someone (it’s presumed, though not confirmed, from Slavic Village) set fire to the bridge and vandalized it, removing several planks so that it was left unusable. The city closed the bridge, abandoning it for decades.

Many considered this to be a deliberate act of de facto segregation. The City of Cleveland’s choice to close the bridge rather than restore it was later upheld in a court of law as proof of the deliberate perpetuation of racial segregation in Cleveland’s schools.

Today, renovations and possibly full restoration are planned for Cleveland’s Sidaway Bridge. As of now, however, with its gap remaining visible, it still stands as a solemn reminder of the racial tensions that have plagued the city for decades and a symbol of the massive changes Cleveland has undergone over the years.