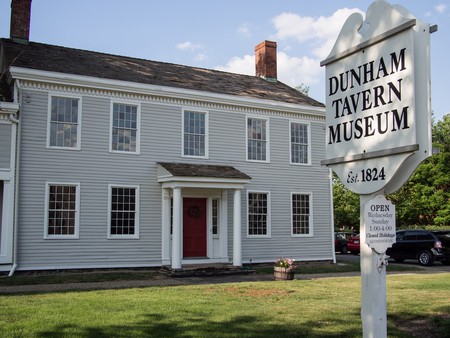 The oldest building in Cleveland, Ohio, has amazingly held strong through the city’s years of change. You can still visit the CLE’s oldest establishment—Dunham Tavern, now a museum and event space—on Euclid Avenue for an afternoon of learning and relaxation.

A young married couple, Rufus and Jane Pratt Dunham, built what later became the Dunham Tavern in 1824 after moving to the 13.75-acre plot of land in the Western Reserve in 1819. In 1832, the west wing was built, while the taproom was added in 1842.

The Dunhams worked as both farmers and tavernkeepers for folks traveling along the stagecoach route in Ohio. Over the years, the Dunham Tavern became a popular site for political meetings, social gatherings, drinking and revelry, business conferences, and turkey hunts.

The Dunham couple sold their tavern in the 1850s, and it remained a private home until being purchased by a Cleveland architect, A. Donald Gray, in 1932. He refurbished the home and tended to the gardens, making it suitable for use as a studio by artists funded by the Works Progress Administration.

The Dunham Tavern, now the Dunham Tavern Museum, is the oldest building in Cleveland that still stands on its original foundation. It was purchased by the Society of Collectors in the 1930s and opened as a nonprofit museum and educational center in 1941. In 1973, it was added to the list of Cleveland Landmarks, and received the honor of a designation in the National Register of Historic Places the following year.

The Dunham Tavern property also included stables, which were later expanded into a full barn in the English style of architecture in the 1840s. It was rebuilt in 2000 after a fire destroyed the original structure in the 1960s, and today it serves as a picturesque setting for special events and wedding receptions.

An apple orchard and ample gardens originally filled out the Dunham Tavern’s remaining acres. The gardens are now kept up by volunteers and museum workers, hewing as close to 19th-century traditions of landscaping, gardening, and plant and floral selection as possible. Local gardeners also grow vegetables in the museum’s gardens for community use.

Visitors to the museum can stroll through the gardens along the 900-ft. Heritage Trail, which also features information about the Dunhams and 19th-century Cleveland, as well as realistic replicas of a stagecoach and log cabin.

The museum is filled with artifacts from the Dunham family and other 19th-century era reminders of Cleveland history, including both originals and carefully constructed replicas. Samplers made by Jane Pratt Dunham’s sisters, Loretta Jane Dunham and Caroline Sarah Dunham, for example, were acquired by the museum and are on display together.

One of the oldest buildings in #Cleveland #dunhamtavern

Today, the museum is open to the general public on certain days, but is best known for its educational programming and special events. 19th-century-style teas, talks on Cleveland history, flea markets, art festivals, community meetings, and shindigs are often held on the museum grounds, in the museum’s interior, and inside the spacious barn.

You can tour the Dunham Tavern Museum for a slice of Cleveland history on Wednesdays and Sundays from 1 – 4 p.m., though the gardens and grounds are open every day from dawn to dusk. Keep an eye out, too, for frequent special events at the museum.

Calling all cats. Most cat mint I've ever seen at one time #dunhamtavern